Zooming in on the linker of bacterial cell wall polysaccharide

Natalia Korotkova and Jeffrey S. Rush
2 contributors
Liked by Salvatore Mandalà and 1 other

The cell wall of the bacterial pathogen Group A Streptococcus is decorated with a polysaccharide termed GAC, which is a target for vaccine development. Here, Rush et al. characterize the linkage between GAC and peptidoglycan, and identify a protein that deacetylates the linkage and thus protects the…

If your throat feels raw or like it's on fire, there is a chance that you have pharyngitis caused by the Gram-positive bacterium Streptococcus pyogenes. If left untreated, streptococcal pharyngitis may progress to acute rheumatic fever (ARF) and rheumatic heart disease (RHD). RHD is rare in wealthy nations, but is the most common heart disease in children and young adults in developing nations and amongst indigenous populations. This life-threatening illness could be prevented with a vaccine against S. pyogenes. A focus of studies in our lab is the rhamnose-containing glycopolymers, so-called rhamnopolysaccharides, that decorate the peptidoglycan of many streptococci. In S. pyogenes, the glycopolymer termed Group A Carbohydrate (GAC) is considered a promising vaccine candidate due to its uniform and invariant expression in different S. pyogenes serotypes, absence in humans and high immunogenicity, eliciting antibodies that inhibit infection. This glycan is a major component of the cell wall and is the basis for the Lancefield serological grouping of beta-hemolytic streptococci proposed by a prominent American microbiologist Rebecca Lancefield in 1933.

However, despite nearly 100 years of intense interest in this glycopolymer, many significant structural features of GAC have gone unrecognized. The study of GAC has been limited by the absence of gentle, yet efficient, methods for release of undegraded polysaccharide from the cell wall. This story started in 2017 when we discovered that if GAC is released from cell wall by gentle enzymatic digestion, instead of harsher chemical methods, the glycan contains previously overlooked glycerol phosphate modifications, which provide negative charges to the polysaccharides (the resulting paper Edgar et al. 2019 @nchembio). This observation inspired our search for chemical methods for the gentle release of GAC from cell wall with the idea that such extraction methods would produce GAC preparations suitable for vaccine development.

We were aware that, like wall teichoic acid (WTA) polymers from Gram-positive bacteria, GAC is presumed to be attached to peptidoglycan via a phosphodiester bond.  Because the phosphodiester bond connecting N-acetyl glucosamine (GlcNAc) of WTA to peptidoglycan is exquisitely acid labile, we surveyed various mild acid treatments of S. pyogenes cell wall. To our great surprise, we found that GAC is very resistant to acid hydrolysis. After further investigation, we discovered that if S. pyogenes cell wall is chemically N-acetylated, GAC is efficiently released from cell wall by mild acid suggesting that the unexpected resistance of the GAC-peptidoglycan bond to acid hydrolysis was due to the presence of an N-unacetylated glucosamine phosphodiester in the linkage unit, rather than the anticipated GlcNAc phosphodiester. In collaboration with Dr. Göran Widmalm and colleagues (Stockholm University), leading experts in NMR analysis of bacterial polysaccharides, we confirmed this hypothesis. This finding sparked the idea that S. pyogenes must express an enzyme responsible for the removal of the N-acetyl group from the GAC linkage GlcNAc residue. Genome analysis and a literature search pointed to a gene, pdi (re-named pplD), encoding a putative GlcNAc deacetylase in the genomes of many streptococci expressing rhamnopolysaccharides. Our chemical method for GAC release from cell wall became a very useful method to establish the role of PplD in de-acetylation of the rhamnopolysaccharide-peptidoglycan linker in S. pyogenes and other streptococcal species. The crystal structure of PplD confirmed this hypothesis and led to the identification of the critically important amino acids residues in the active site of PplD.

How does deacetylation of the rhamnopolysaccharide linkage GlcNAc benefit individual streptococci?  It is not yet completely clear.  GAC is an important determinant of viability and virulence in S. pyogenes, and our study shows that PplD promotes resistance to cationic antimicrobial proteins produced by host. Furthermore, we found that deacetylation of the GlcNAc linkage residue makes the rhamnopolysaccharide-peptidoglycan bond extremely sensitive to acidified nitrite. It raises the question of whether naturally occurring salivary nitrite, in the presence of lactic and acetic acid produced by bacterial fermentation, might affect rhamnopolysaccharides expressed by streptococci colonizing various oral niches. Although extensive further investigation will be required to address these potential questions, the unexpected discovery of this modification of GAC constitutes an exciting direction for new research initiatives and provides a platform for developing efficient methods of extraction and conjugation of GAC for the production of a vaccine against S. pyogenes.

This work was made possible by contributions from our collaborators Alessandro Ruda, Michael Federle, Jennifer Chang, Artemis Gogos, Gérard Lambeau and Konstantin Korotkov. 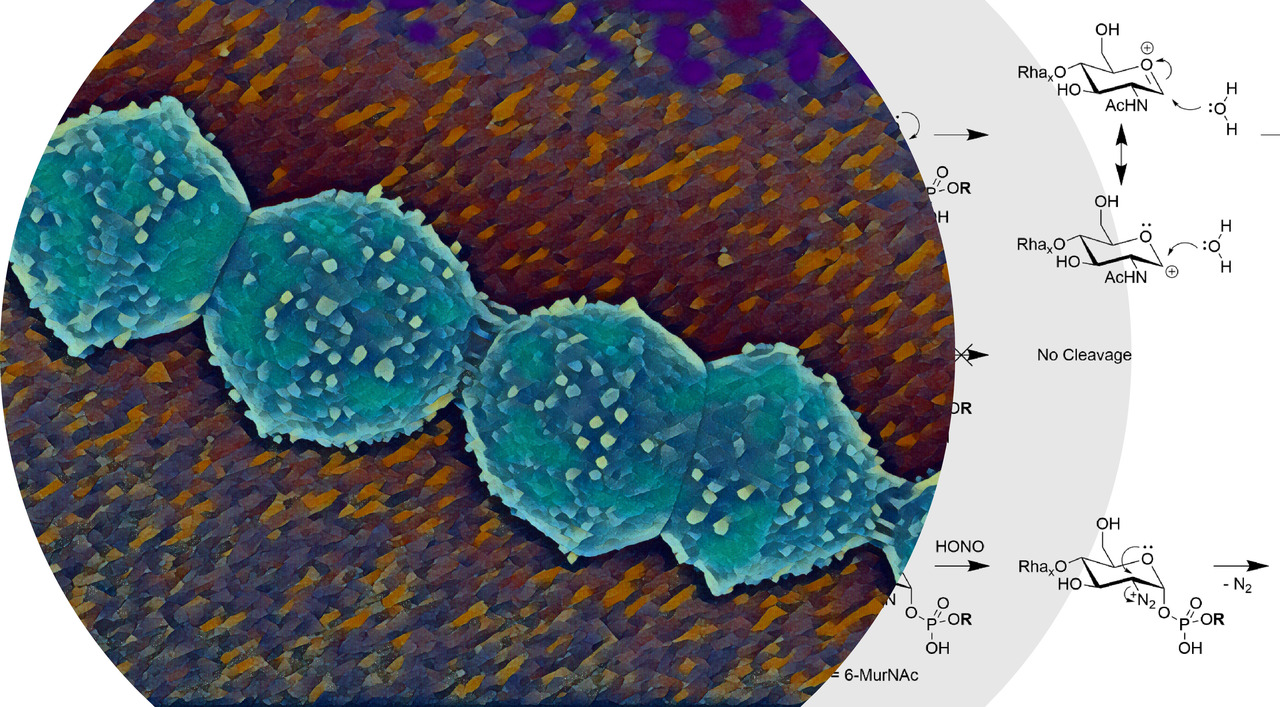 Zooming in on the linker of bacterial cell wall polysaccharide