A rumen microbiome assembly story...
Itzik Mizrahi
Professor , Department of Life Sciences, Ben-Gurion University of the Negev and the National Institute for Biotechnology in the Negev, Marcus Family Campus, Beer-Sheva, Israel
Follow
Like Liked by Oded Béjà and 2 others
0

How complex microbial communities assemble through the animal’s life, and how predictable the assembly process is, remains poorly understood. Here, the authors profile the cow gut microbiome from birth to adulthood in animals born in C-section or natural birth and show that chance events early in li…

The story begins at a dairy science convention in Jerusalem. When Ori Furman was about to graduate from his Master’s degree, he was interested in pursuing the same course and to continue studying ruminants, a topic that had intrigued him since his high school days in an agricultural school. He was specifically interested in exploring the mechanism that drives the function of the rumen microbiome. He decided to attend the Mizrahi group lectures, where he met me (Itzik). Soon thereafter, he started his PhD program in our group with the intent to study the complex process of rumen microbiome assembly–an important topic that has not been adequately addressed in the past.

Already at the beginning of this research, we aimed to understand how the rumen microbiome is shaped over time. After all, the ability to digest plant biomass and harvest its energetic potential into the animal's needs is not a congenital one, but rather acquired via specific microbial communities. The combination of the rumen as a large foregut compartment (which essentially serves as a fermentation chamber), together with the involvement of the microbial community residing within this compartment, provides the cow with the ability to break down plant biomass efficiently. Yet, it is not entirely clear what leads to the formation of this intricate community? What are the forces behind the process of community assembly? Are we looking at a completely deterministic process in nature or is this process more stochastic, giving rise to alternative trajectories of assembly due to historical contingency. In such a scenario, the assembly process is affected by early invading species that would affect later invading ones, and these, in turn, would affect those that arrive after them. Hence, the starting point echoes in time, until the rumen community stabilizes at a certain state as a function of its first colonizers.

How then, can we determine if this assembly process is affected by early life events? The simple solution would be to experimentally simulate such a random event. This event would create an entirely different starting point for some of our animals, and we could then examine their effects on microbiome assembly while keeping the animals under the same experimental conditions.

The increasing interest in Caesarean section in human studies and its impact on the host microbiome gave us the idea that by delivering some animals via C-section, thus bypassing the birth canal, we could artificially create the desired difference in starting point for microbial assembly. Moreover, the conditions in our experimental facility allowed us to control every aspect of the newborn’s rearing conditions, thus truly creating a single early-life event. We therefore selected 45 Holstein cows and sampled their microbiome from birth until adulthood. A third of these animals were born via C-section. Following birth, all animals were exposed to the same conditions, whereby the C-section or lack thereof represented the only discriminating event of their lives.

Here we would like to thank all the amazing people in the Mizrahi group that helped with this microbiome-sampling effort that involved thousands of samples spread over three years. Although Ori “bribed” all of us with lots of snacks and beers after each sampling event.

Let's go over briefly what we found and discuss our conclusions. First and foremost, we found that irrespective of the mode of delivery, all of the animals acquired early on a group of highly abundant and very persistent microbes that we termed the core successional microbiome. These include the species Akkermansia muciniphilia, a bacterium scarcely reported in ruminants, which is associated with mucin utilization. It appears that deterministic forces represent the main driver behind rumen microbiome assembly, judging by similar dynamics of age and diet across the cohort. Nevertheless, the two delivery modes were accompanied by changes in many microbiome features, such as diversity as well as the identity of invading species that differed between the two groups.

Interestingly, the differential species invasion observed in the two delivery modes was maintained until adulthood, suggesting that early-life rumen colonizers exerted long-lasting effects, potentially by changing their rumen environments through their activities. This process, also termed niche modification, is driven by the different microbial compositions of the two delivery modes immediately after birth that affect environmental conditions, under which different microbial species appear to be selected later on. This is a natural process that happens when microbial metabolites are excreted into the environment, which occurs, for example, when we prepare pickles, wine, or bread, where microbial activity either acidifies their environment, increases the percentage of alcohol, or makes our dough rise owing to the increase in concentration of carbon dioxide. Moreover, it appears that the core successional microbes, shared by both delivery-mode groups, arrive earlier in C-section animals, suggesting that animals born via C-section are more prone to invasion than vaginally born animals.

In view of the observed long-term “memory” of the rumen microbiome regarding its early-life events, we wondered whether we could predict the temporal behavior of microbial species? This led to a collaboration with Prof Eran Halperin’s group, then at Tel Aviv University and now at UCLA, together with his very talented and enthusiastic student at the time,  Dr. Liat Shenhav. Eran’s group specializes in developing tools for analyzing large biological datasets. Moreover, Eran and Itzik are friends, and it was natural to consult and work together. Liat really connected with the microbiome world and our group, and she soon became an integral part of the Mizrahi Lab and this study. Joining forces with these amazingly talented scientists led to the development of a tool called MTV-LMM. This statistical, bioinformatic tool can identify time-dependent microbes, i.e., microbes whose abundance can be predicted based on the previous microbial composition. Using this novel tool, we identified close to 1400 microbial species that were dependent on the microbiome composition of previous days, most of which were shared with the core successional microbiome. It was surprising for us to discover that the temporal dynamics of these species was also affected by delivery mode, where species arrived earlier in C-section animals (even though we found them in both groups!).

To conclude, rumen microbiome assembly is mostly deterministic in nature and mainly affected by diet and age. Still, it is also affected by stochastic forces such as delivery mode, which exerts long-term effects on microbial assembly. This suggest that microbial composition can be predicted and modulated by intervening early in life. Finally, we rediscovered the well-known fact that working with gifted, amicable people from other disciplines is awesome! They complement your own points of view and your ability to discover and ask questions, thus broadening and enriching both your science and your life. 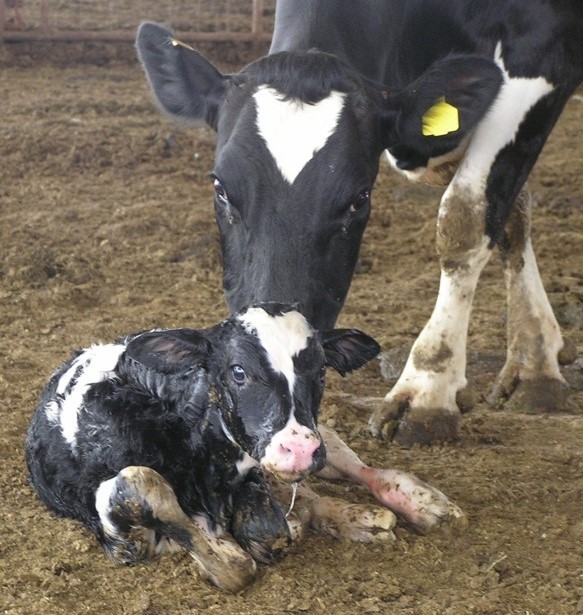