When phytoplankton realize that bacteria are present

Phytoplankton in the ocean transform inorganic carbon into organic substrates during photosynthesis. They contribute about 50% of Earth’s annual primary production and play a central role in global biogeochemical cycles. In the surface ocean, living phytoplankton release organic compounds into seawater as they grow, and are surrounded by heterotrophic bacteria that rapidly take up and transform these metabolites1. The release of organic matter by phytoplankton follows diel cycles coordinated with the availability of the light; the metabolism of the bacteria show this same pattern2, implying that they are dependent on and tightly regulated by phytoplankton organic carbon supply. A question that remains largely unanswered, however, is whether bacteria passively make use of excreted phytoplankton metabolites, or whether they can affect their release. 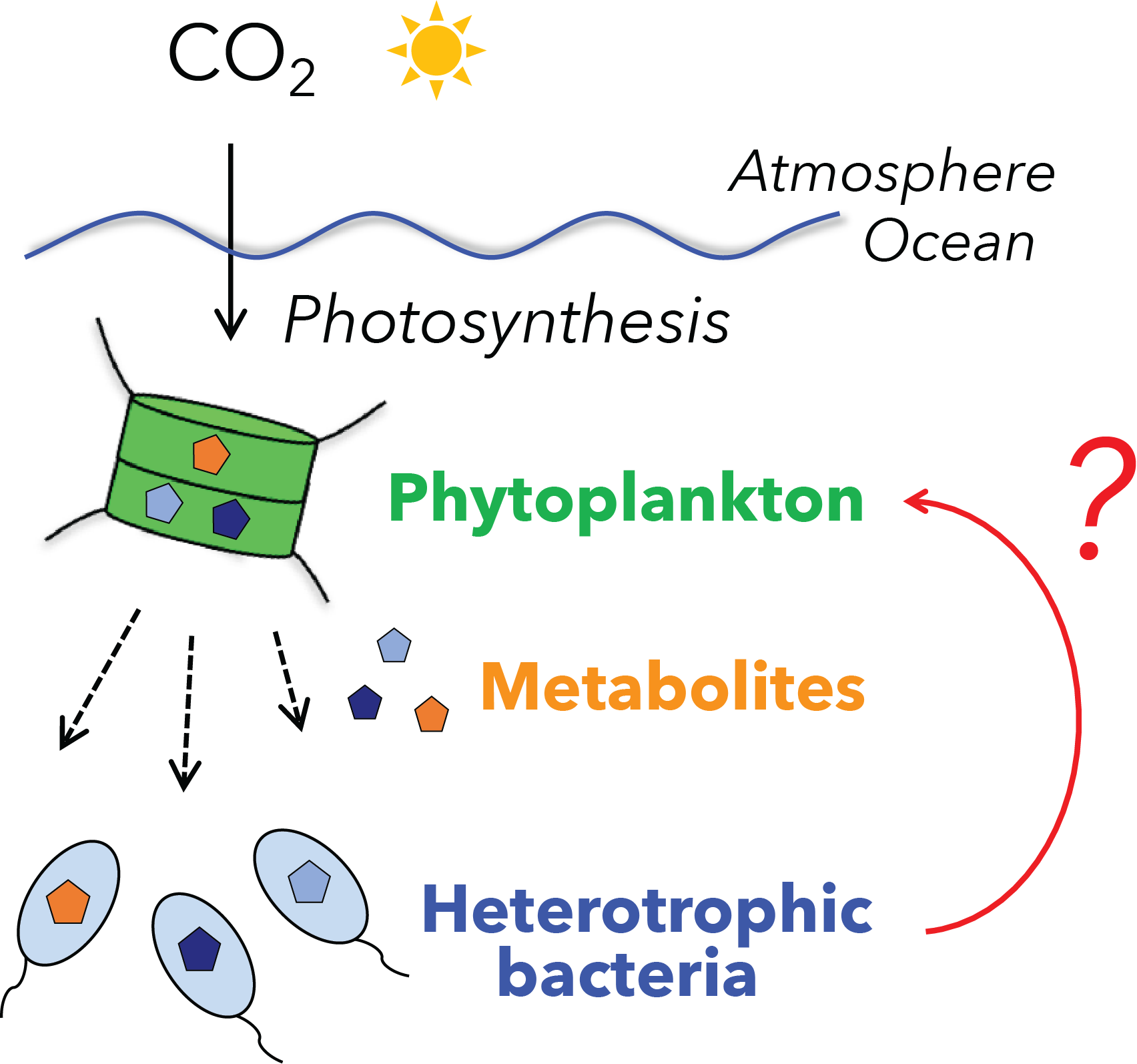 Efforts to understand the factors regulating phytoplankton metabolite release have mainly focused on physical and chemical factors3. We instead decided to tackle the role of the organisms they live with. We first cultured the diatom Thalassiosira pseudonana CCMP1335 under a diel light cycle, mimicking that of the surface ocean, and then added the heterotrophic bacterium Ruegeria pomeroyi DSS-3. We tracked diatom metabolite production and bacterial gene expression in this model co-culture over two 24 h light cycles.

Bacterial genes involved in substrate utilization showed diel cycles of expression that peaked in the daytime; control experiments showed that this was not triggered directly by the light and only occurred in the presence of phytoplankton. We concluded that substrate supply from the diatom was directly affecting bacterial metabolism. The diatom metabolome, however, which we considered a likely source of the excreted metabolites, had surprisingly diverse concentration patterns. Some metabolites showed diel concentration patterns that peaked either at noon or mid-afternoon, as we expected; but some showed monotonic increases over the experiment while others showed decreases.

We became curious about the diverse endometabolite patterns in the diatom, and asked whether a simple ecological model of metabolite flux from phytoplankton to seawater to bacteria could help us understand. We focued on eight metabolites that were repesented in the diatom metabolome and for which bacterial uptake genes were known: acetate, 2,3-dihydroxypropanesulfonate (DHPS), glycerol-3-phosphate, dimethylsulfoniopropionate (DMSP), proline, glucose, uridine, and leucine.

Interesting results emerged. When we used diffusion as the only mechanism of metabolite release from phytoplankton, we could not reproduce all patterns observed in the co-culture experiment. We then added two additional mechanisms to the model: active release of metabolites by phytoplankton to maintain their physiological balance, and enhanced metabolite production by phytoplankton in the presence of bacteria. These additions significantly improved the model output, but the bacterial enhancement mechanism turned out to be the particularly important for the monotonically increasing compounds (DHPS, glycerol-3-phosphate, DMSP, and leucine). The simplest explanation for this seemed to be that the diatom recognized the presence of the bacteria and synthesized these compounds at a higher rate.

We tested this hypothesis experimentally and confirmed that phytoplankton grown in co-culture with bacteria had higher internal concentrations of these metabolites compared with axenic cultures. The one exception was DMSP, which has multiple biological functions in phytoplankton cells such as osmoregulation and reactive oxygen protection, and the factors regulating its accumulation in the phytoplankton metabolome may be quite complex.

How did the diatom detect whether or not bacteria were present? This is still a question to be addressed. But given the large amount of organic matter fixed and released by marine phytoplankton each day, bacterial influence on phytoplankton metabolism may play an important role in ocean carbon flux.