Exploration of Sub-Saharan Africa by the West commenced during the age of discovery mainly revealing the contours of the continent whilst large parts of the heart of Africa remained terra incognita up till the 19th century.

Exploration of Sub-Saharan Africa by the West commenced during the age of discovery mainly revealing the contours of the continent whilst large parts of the heart of Africa remained terra incognita up till the 19thcentury. Similarly, we currently mainly just have an outline of what we consider to be African Gut microbiomes (Prevotella-rich) yet we have yet to grasp the complexity of these gut microbiomes and how their functioning compares with more Western counterparts. Several smaller “expeditions” investigating the gut microbiomes of rural Africans or even of hunter gatherers have shown stunning results in regards to how dissimilar they are from more Western gut microbiomes. None however have thus far given any detailed insights into how these distinct gut microbiomes are built up in order to compare these with the development of more Western gut microbiome compositions.

Studying the direction and the rate of maturation of the gut microbiome in young infants, especially during the first three years of life, is essential to understand why various diseases associated with a Western lifestyle are increasing in prevalence. During the first 3 months of life (assuming a term delivery) a high abundance of Bifidobacterium is of critical importance protecting against allergy development later in life 1,2. Later, once weaning commences, the rapid development of a trophic network(s), consisting out fibre degraders and acetate and lactate producers that supports the growth of butyrate producers such as Faecalibacterium and Roseburia, becomes key. A slower transition from Bifidobacterium towards such properly developed trophic network is associated with a higher risk developing immune diseases such as food allergies or type 1 diabetes 1,3.

Our study consisted of 616 children from rural parts of The Gambia, initially aged 7-37 months, whom provided multiple samples (n=3) during a 3-month period. Our African partners/authors were absolutely crucial in the collection of such an extensive data/sample set within these settings 4. As expected 5. Bifidobacterial levels were much higher in younger children, just like in western cohorts, and rapidly declined as children got older. However, not only did we observe the trophic network supporting Faecalibacterium steadily establish itself, we in addition observed a very rapid rise to dominance during the first year of life of Prevotella copri(~35% of reads) and we also observed the slower formation of a second trophic network centred around Prevotella stercorea. For clarity, we see trophic networks as a food web of metabolically interdependent, frequently phylogenetically diverse organisms 6,7. Species within such trophic networks can be identified by their strong positive associations with each other as they, unless they have the same function (same genus), depend on or at least benefit from one another (Figure 1).

This study provides insight into how what has thus far been regarded as the Prevotella enterotype is actually assembled. Not only should we not see Prevotella as some monolithic entity, except in regards to its antagonistic relationship with Bacteroides, but that it consists of at least 2 important groups; P. copri and an additional trophic network centred around P. stercorea. The high abundance of P. copri in these children with a high fibre low protein diet emphasises the importance of its metabolic pathways in regards to fermenting complex polysaccharides. It has been shown in other studies that Prevotella plays an important role in glucose metabolism 8, that it encodes all the enzymes necessary for the Embden-Meyerhof-Parnas pathway 9, that it can degrade pyruvate to acetate and formate 10 and that it is important in multiple pathways involving drug, carbohydrate, and cofactors and vitamins metabolism 11. Many members of the Prevotella stercorea trophic network are however not found or in only in low numbers in gut microbiomes from individuals in industrialized countries 2,1,12. As a result, they have often not been studied sufficiently (or at all) which makes it difficult to understand or explain, with any degree of certainty, what their roles are. It is however clear, from what is known about several of these species, and by looking at the phylogenetic diversity, that the assemblage is likely to have a very wide assortment of metabolic capabilities covering everything needed to form a self-contained trophic network, leading (for example) to an enhanced production of short chain fatty acids, as compared to microbiome compositions lacking this cluster.

It is known that these Prevotella-rich microbiome compositions have double the short-chain-fatty-acid production levels capability compared to Western Bacteroides-rich compositions both in vivo (humans) and in vitro10,11,13. These differences in intestinal SCFA production are not genetically determined as African Americans have the same (low) SCFA production levels and the same gut microbiota profiles (very little Prevotella) as Americans of European descent 14,15. From a fermentative capability point of view the African gut microbiomes thus have more tools at their disposal, represented by the P. stercorea trophic network alongside P. copri, compared to their more atrophied Bacteroides-rich Western counterparts. Studies of other large cohorts (in preparation) show that this loss of bacterial diversity and metabolic capability is an ongoing detrimental development in Western society. Going back to its roots, probably literally by eating more roots amongst various other dietary fibre rich nutrients, could stymie and possibly reverse this degenerative trend.

Figure 1: Schematic overview of the main bacterial groups (including trophic networks) and their associations (red: negative, green: positive) found in children from The Gambia. 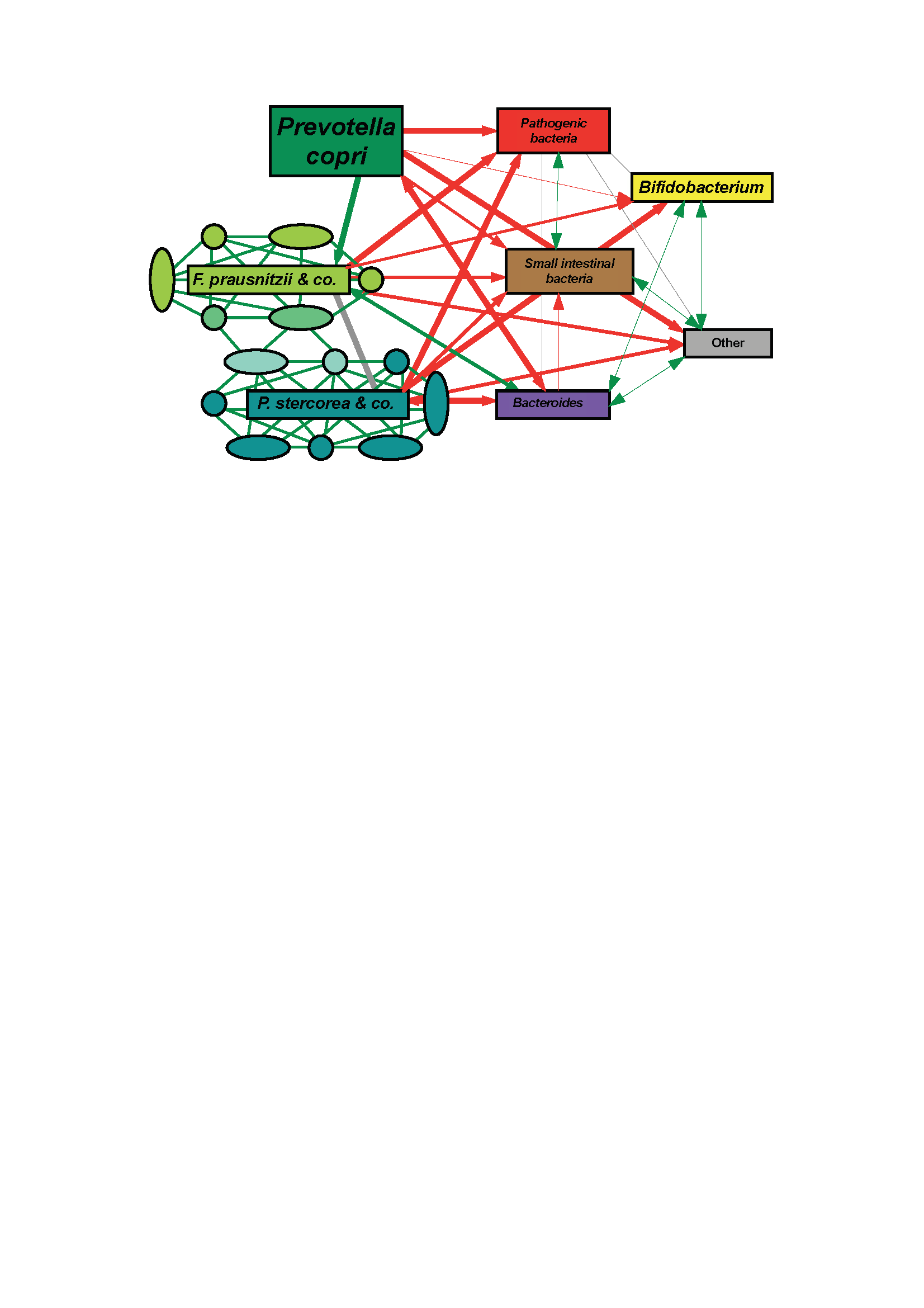 Bacterial oxylipins: a key to multicellularity and to combating antimicrobial resistance? 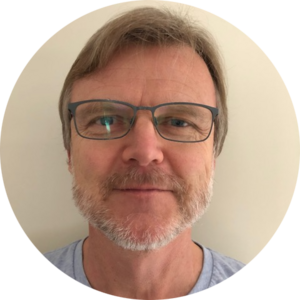