Andrew Nottingham
Lecturer and Research Fellow, University of Leeds
Follow
Like Liked by Evelina Satkevic and 1 other
0

Tropical forests store vast amounts of carbon that might be liberated as temperatures increase. A 2-year experiment of tropical forest soil warming reveals that microbial diversity is reduced, but enzyme activity is increased, resulting in CO2 emissions threefold greater than modelling predicts.

Tropical forest soils harbor diverse communities of microbes that play important roles in ecosystem function and global climate1. These communities drive biogeochemical cycles, whether by fixing atmospheric nitrogen or by decomposing and transforming organic matter, providing a pathway for both carbon sequestration and its release as atmospheric CO21. They also play an important role in maintaining forest biodiversity through symbiotic and pathogenic interactions with plants2,3. Global anthropogenic change, including a warming climate, threatens these microbial communities and their functioning, with potentially major implications for the Earth system.

Theory predicts that climate warming will increase the activity of soil microbes and, in turn, stimulate the decomposition of soil organic matter and trigger its release to the atmosphere principally as carbon dioxide – generating a positive feedback on further climate change4. This feedback could be potentially large in the tropics, where soils contain a third of the global soil carbon stores5. Despite the potential importance of this interaction for tropical soils, research in this area has been lacking.

Outside the tropics, dozens of warming experiments have been performed and have generally shown increased CO2 emission from soils as microbial activity increases at warmer temperatures6. Some of these studies have reported temporary carbon losses over a few years, while others reported sustained losses over decades7. The consensus from these studies is that the response of soil microbes to warming partly explains the increased carbon loss, including changes in activity and in the community composition of microbes, and related changes in the temperature sensitivity of microbial growth and carbon use8. The response of microbial diversity to warming is less clear, although there is a strong basis to predict an increase in diversity under warming based on energy-diversity theory9 and observations consistent with this theory showing that microbial diversity is correlated with mean annual temperature across geographical gradients10,11. In support of this prediction, soil microbial diversity increased after 20-years of soil warming in a US temperate forest12 although there may be exceptions to this pattern13. Any change in microbial diversity under warming may be especially important for soil health, in the light of observed correlations between soil diversity and biogeochemical processes14,15. However, are these results relevant to the tropics, which dominate the global terrestrial carbon cycle and where the majority of Earth’s biodiversity resides, and - moreover - where temperatures are already high?

We tested the response of tropical soil microbial communities to a warming climate by conducting a whole-profile soil warming experiment in one of the most intensively studied tropical forests in the world on Barro Colorado Island in Panama (SWELTR; Soil Warming Experiment in Lowland TRopical forest).

The experiment was a major undertaking, taking two years to design and build, and was finally switched on in 2016. The experiment consists of five warmed plots, paired with five control plots, across a 1 ha area of forest. Each warmed plot contained a heating structure, made of 50 m of heating cable encased inside stainless steel tubes, which was then inserted to 1.2 m depth in the soil to create a circular plot of 5 m diameter with the soil heated to the underlying bedrock. The experiment heats approximately 120 m3 soil in total. This design has been shown to produce relatively even heating of the soil volume although small gradients do occur16, which we used here to provide two levels of warming. The surface soil temperature in the centre of the plot was slightly cooler due to conductive heat loss to the atmosphere (3oC warming treatment), while close (~20 cm) to the heating structure soil temperature steeply rose (8oC warming treatment). We excluded this high temperature ‘buffer zone’ for all other measurements, but we used it for this specific study. Although extreme relative to recent climate warming, such a level of warming is a possible scenario this century, where the predicted atmospheric warming for tropical regions is coupled with warming due to the localized interactive biophysical effects of deforestation and land-use change17. The data for our study were collected during the wet season, when soil moisture was not limiting to microbial activity, and after two years of experimental soil warming. We report two major and unexpected results.

First, we found that microbial diversity declined with increasing temperature – especially for bacteria – with many taxa present in control soils that were undetected in warmed soils. At the same time, there were additional taxa present in warmed soils that were undetected in control soils (although too few to offset those lost). This result leads to an important question: is the loss of taxa significant for soil functioning and, more broadly, for tropical forest functioning? Further studies are needed to address this but we suggest that this is probable, considering the high degree of plant-microbial specificity in tropical forests2,3, and the breadth of taxa that responded to the warming treatment, whether significantly decreasing in relative abundance (e.g. bacterial phyla, Bacteroidetes; fungal order, Agaricales) or increasing (e.g. bacterial phyla, Firmicutes; fungal orders, Glomerales, Eurotiales, Hypocreales and Pezizales).

Our result, while striking, comes with caveats. We warmed the soil profile from surface to bedrock, but not the vegetation from aboveground. Therefore, further study is needed to elucidate whether plant productivity and belowground carbon allocation may change under full-ecosystem warming. This could have further consequences for the soil microbial community by changing substrate inputs from plants to the soil. The timing of our study also needs consideration. Given recent data suggesting a relatively long time for soil microbial generation turnover (e.g. over 20 days18), it is likely that the microbial community changes we observed following two years of warming were mainly due to compositional shifts rather than physiological or evolutionary change in individual species. Moreover, it is possible that the taxa we detected in the heated soil treatments but not in the control-plot soil may have been present in control soils but at concentrations too low to be detectable. An important question for future study is whether, over longer time-scales, evolutionary change in microbial species may occur – whether it is significant relative to compositional changes – and what the ultimate consequences are for soil processes and the carbon cycle.

The second important finding is that the microbial community change and the associated increase in its growth sensitivity, as determined by ex situ incubations of soils following the addition of isotopically labelled substrates, could not explain the high CO2 emission measured under in situ warming. Our finding that enzyme activities increased at higher temperatures than microbial growth led us to hypothesize that abiotic interactions may have contributed to the accelerated CO2 emission – where enzyme activity at high temperatures is driven by release from mineral-stabilized pools rather than microbial synthesis. This hypothesis aligns with emerging evidence showing that abiotic processes such as the formation and release of mineral-associated organic matter are extremely important in regulating ecosystem soil C storage19,20. The abiotic controls on soil carbon under a changing climate is clearly an important area for future investigation, both to predict the response of tropical soil biogeochemistry to climatic warming, and to generate a strong mechanistic understanding for the future conservation and management of tropical soils.

Our results are striking but our study poses as many new questions as it addresses. We show that the composition and diversity of tropical forest soil microbial communities, and the release of tropical soil carbon as CO2, are highly sensitive to a warming climate – with evidence for large community compositional change and adaptation of community-growth to warmer temperatures occurring over just a few years. We now need to understand the potential consequences of those changes, at wider and longer-term scales, for tropical ecosystems as globally important stores of carbon and biodiversity.

My research aims to improve our understanding of how soils interact with vegetation and the climate and how those interactions are affected by global environmental change. 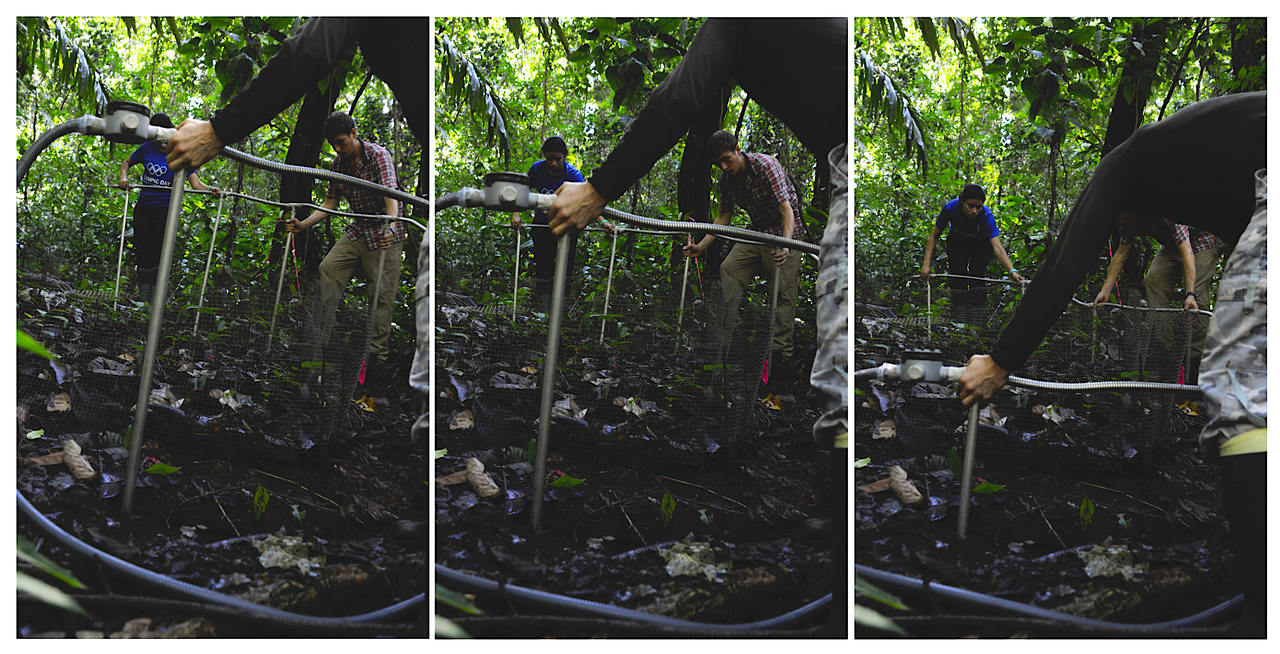