Using Fungal Biotechnology to revolutionize how we combat climate change

When you hear the word “fungi,” what do you think of? Mushrooms? Molds on expired food? Bad pizza toppings? Probably not a potential solution to mitigating climate change. And yet, fungal biotechnology can provide just that. It can potentially offer sources of food, replacements for plastic, and much more.

To explain how, it’s helpful to know a bit about the lifecycle of filamentous fungi. These usually begin life as tiny spores. In warm, nutrient-rich soils, the spore will germinate and form thread-like cells known as a hypha, which will then connect with each other and form a mycelium. When nutrients run low, the mycelium starts to create reproductive structures, like asexual spores or fruiting bodies such as mushrooms.

They are also well-adapted to decomposing a wide range of material and producing enzymes, lipids, proteins, and more. Many industries, such as food, detergent, fuel, and paper use these in their products.

But how does this tie into climate change?

Filamentous fungi can provide far more food than just mushrooms for your pizza. Some fruiting bodies, like Laetiporus sulphurous, nicknamed the “Chicken of the Woods,” have a similar  texture  to meat. Both chicken and mycelium have similar-sized fibers, and as a result, companies can craft foods from the threads that look and taste a lot like chicken, as well as other meats.

Making it is also much more efficient than meat production. For example, growing filamentous fungi for protein currently uses about half of what’s needed for chickens and a tenth of what beef requires, and there’s still room for improvement!

Many countries view forests as a way to help mitigate the effects of climate change, both as a biofuel and as a way to store carbon dioxide. But in order to keep the carbon dioxide stored for as long as possible, we’ll have to be better at reusing and recycling the wood. This is where the fungi come in.

Remember that they’re great at decomposing materials?  Those processes could help “recycle” wood before it’s used for energy. Fungi or their enzymes can decompose the wood constituents, turning the sugars into energy-rich molecules, which can then create second generation chemicals and biofuels.

The upsides for using plastic are obvious: they’re cheap and convenient. The downsides are also clear: they have a huge negative environmental impact. Five to thirteen million tons of plastic end up in our oceans. By replacing the synthetic textiles of plastic with mycelium-based ones, however, we can create similar products that have far less of a negative effect on the environment.

But what about the plastic that’s already out there? Only a few reports are available right now about biodegrading plastics using fungi, but a few promising plastic-degrading fungi have been isolated. Many plastics, however, cannot fully be degraded from fungi alone, and further research is needed.

It’s not all roses (or mushrooms), however. Fungi could cause some major issues in the future. Currently, about 1.2 billion people are affected by diseases caused by fungi and 1.5-2 million die from them annually. They can also wreak havoc on crops. Asian soybean rust threatens millions of hectares of soybeans each year in Brazil, although the fungi were only first detected in the country less than 20 years ago. Even fungi that feed on dead material still affect both humans and our crops. Some of these create toxins, and the Food and Agriculture Organization estimates that up to 25% of crops worldwide are contaminated with unacceptable levels of these chemicals. Plenty of papers have been published on the ill-effects of fungi, but further studies are needed, especially as climate change affects the ranges of plants and fungi.

It’s not a question of when fungal biotechnology will start to play a major role in the economy and our current lives. That reality is already here. And it seems almost inevitable that they will play a larger role in the future. As recycling and reusing materials becomes more and more important, it becomes more and more vital that we use the decomposing powers of fungi.

Of the 17 sustainable development goals the UN has set, fungi can help solve 10 of them! Further studies are needed, but fungal biotechnology is here to stay—and in the future we may even have an economy based around fungi. 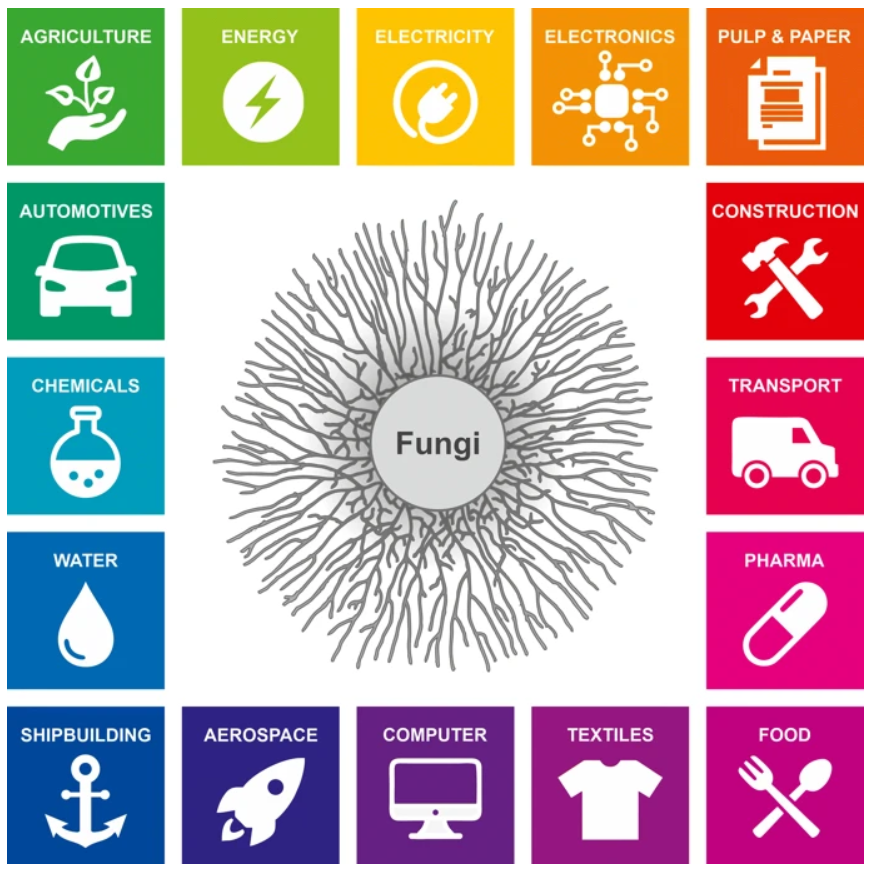 Using Fungal Biotechnology to revolutionize how we combat climate change