Context : At the interface between the human digestive lumen and the host, the mucus layer which is secreted by goblet cells, constitutes both a physical barrier against the entry of pathogens and the reservoir of a specific commensal microbiota1,2. Notably, enteric pathogens have to interact with and penetrate this line of defense in order to colonize the intestinal epithelium. Among enteric pathogens, enterotoxigenic Escherichia coli (ETEC), the main agent responsible for travelers’ diarrhea, is equipped with an arsenal of adhesins and mucinases, allowing respectively adhesion to intestinal epithelial cells and mucus degradation3.

Objectives and methods: The interactions between intestinal mucus, human gut microbiota and ETEC in the virulence of the pathogen remain poorly studied. Using a set of complementary in vitro approaches simulating the human digestive lumen or the intestinal epithelium, this work describes how the intestinal mucus compartment can shape the survival of the reference strain ETEC H10407, its adhesion to intestinal cells, the expression of its virulence genes, the induction of a pro-inflammatory response (interleukin-8) and its interaction with a gut microbiota of human origin.

A focus on the newly developed TIM-1 model to assess ETEC survival and virulence. Regionalized and dynamic in vitro gut models which capture the complexity of the human gastrointestinal physiology are valuable tools to investigate ETEC behavior in human digestive conditions. Among the available systems, the multi-compartmental and computer-controlled TNO gastrointestinal model (TIM-1) is currently considered as the most complete simulator of the upper gastrointestinal tract by simulating the main physicochemical parameters of the human digestion4,5 (Figure 1). In the study from Sauvaitre et al., this model was adapted for the first time to simulate the mucus environment by two means: addition of mucus secretion (final concentration of 3 g.L-1 throughout the digestive tract to mimic mucus shedding) and addition of two polyester pockets containing 40 beads of mucin- alginate beads placed in each of the four compartments of TIM-1 to provide physical surface.

This model enables to reproduce the physicochemical conditions encountered in the lumen of the human stomach and 3 parts of the small intestine (duodenum, jejunum and ileum). In this study, mucin in solution (as mucus secretion) and mucin-alginate beads (as a physical mucus surface) were added for the first time.

Results. Using the TIM-1, we demonstrate that the mucus compartment favors the survival of ETEC H10407, probably by providing a niche allowing the pathogen to maintain itself under stringent human digestive conditions. By integrating the host part through the use of the Caco2 (enterocytes) / HT29-MTX (mucus cells) co-culture model, we demonstrate that the presence of mucus promotes ETEC adhesion and modulate the expression of main virulence genes. When incorporating a highly complex gut microbiota from human origin in batch fermentation experiments, we demonstrate that the addition of mucus does not promote ETEC colonization.

Using this set of complementary in vitro approaches, our results suggest that the presence of a mucus niche promotes the survival of ETEC in the lumen of the human upper digestive tract and their adhesion to intestinal epithelial cells, suggesting an increased colonization capacity. This study highlights the major role played by mucus in the pathophysiology of ETEC infections, thus paving the way for the development of new strategies against these infections specifically targeting the interaction with mucus. 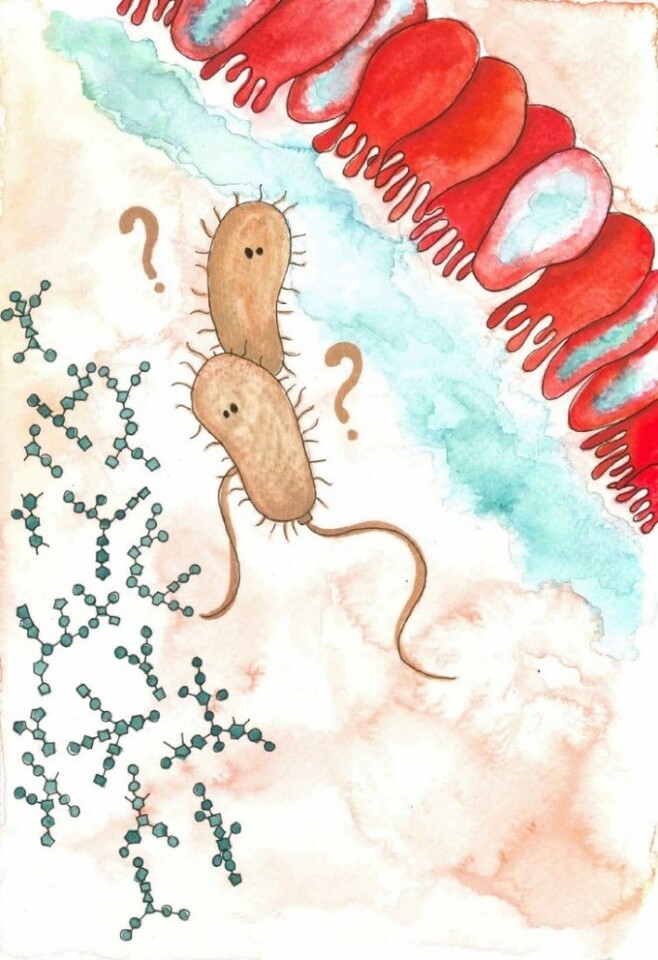 The interactions between enterotoxigenic Escherichia coli (ETEC), the main pathogenic agent of travelers’ diarrhea, intestinal mucus and human gut microbiota remain unknown. Here, we describe how mucus can modulate ETEC survival and virulence in the human in vitro digestive environment.