The specific way of gut microbe to communicate with host

Akkermansia muciniphila produces P9, a small protein that interacts with ICAM-2 to increase thermogenesis and glucagon-like peptide-1 (GLP-1) secretion in mice
Chung Hwan Cho, Hyo Shin Yoon & Chung Hwan Cho
3 contributors
Like Be the first to like this
0

Proteomics of gut microbe and narrowing down to the effective molecule by using mammalian cell cultivation provides interesting insights that gut microbes could be as natural compound libraries for drug screening. Exenatide, for example, was also found in the saliva of the Gila monster that acts as glucagon-like peptide-1 (GLP-1) which regulate appetite thereby controlling glucose homeostasis in our body[1].

The gut microbiota is known to influence the enteroendocrine system[2] and modulate the host immune system through microbially derived metabolites or cellular membrane components[3]. Specially, several studies have demonstrated that an abundance of A. muciniphila is correlated with metabolic disorders, such as obesity and type-2 diabetes, in both preclinical and clinical studies and causal impacts of viable or pasteurized A. muciniphila having been proven in metabolic diseases models [4-6]. Here, we try to elucidate the molecular mechanism whereby A. muciniphila interacts with its host, leading to the amelioration of metabolic diseases.

Effects of P9 in high fat diet (HFD)-fed mice model was found by inducing GLP-1 as well as increasing thermogenesis, regulating weight and glucose homeostasis. By using ligand-receptor capture analysis, we found that P9 interact with intercellular adhesion molecule 2 (ICAM-2) and finally interleukin-6 deficiency abrogates the effects of P9 in glucose homeostasis and downregulates ICAM-2 expression. Although sustaining P9 in an ecologically competitive harsh condition under an HFD could be challenging if A. muciniphila could not outcompete other bacteria in vivo, our results show that the interactions between P9 and ICAM-2 could be targeted by therapeutics for metabolic disease. 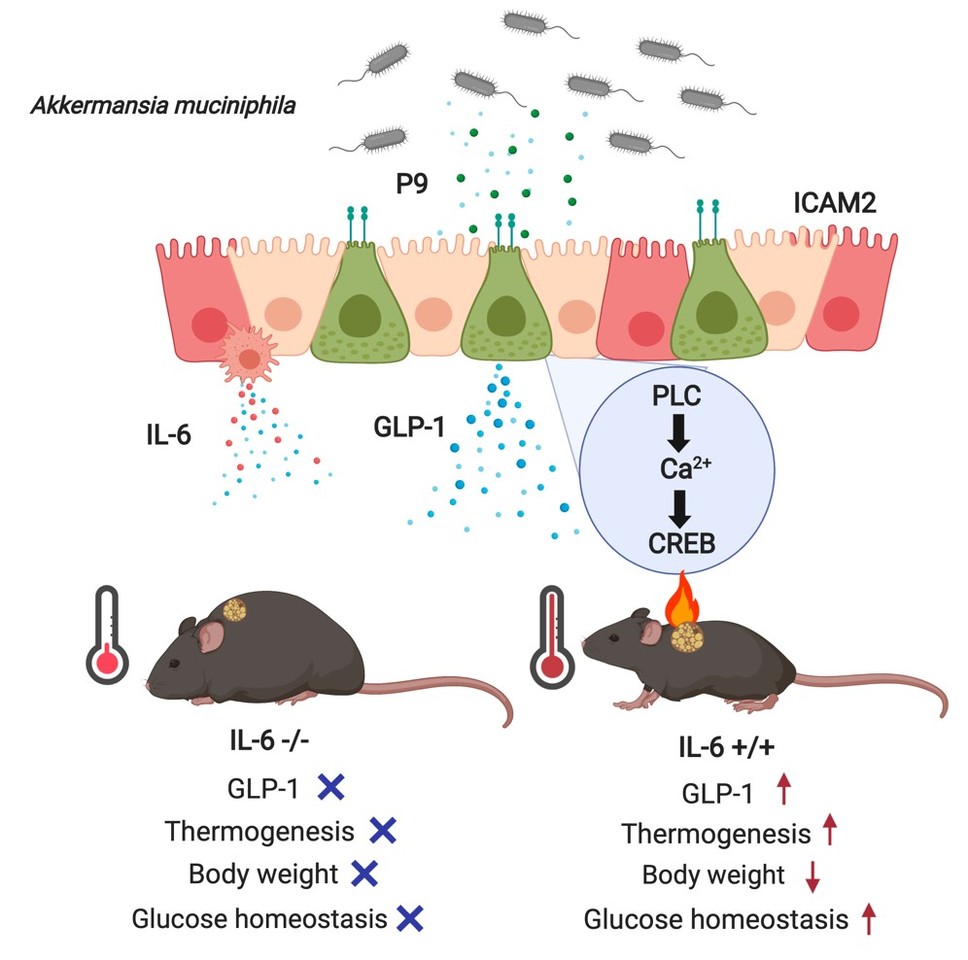 The specific way of gut microbe to communicate with host