"Deep-sea shipwrecks represent island-like ecosystems for marine microbiomes" is a case study of how built environments shape microbiomes for decades after arrival on the seabed. We show diversity increases with proximity to a shipwreck, and shipwrecks are island-like systems for sediment microbes.
Leila J Hamdan
Associate Professor and Associate Director, University of Southern Mississippi - School of Ocean Science and Engineering
Follow

Our paper “Deep-sea shipwrecks represent island-like ecosystems for marine microbiomes” made its debut on Earth Day, 2021, 11 years after our interest in shipwreck research in the Gulf of Mexico began. April 22, as many know, is both holiday and anniversary of when the Deepwater Horizon drilling platform sank, adding a new shipwreck to the seafloor beginning an uncontrolled release of oil and gas. We began studies of shipwreck microbial ecology and the impacts of the spill on them in 2014. The first place we visited was the historic (greater than 50 years old) shipwreck Anona, located ~115 miles south of the Mississippi gulf coast.

The first time I saw Anona through the aid of a remotely operated vehicle (ROV), I was enchanted. I stared at the multiple ROV feeds in anticipation of that first look which turned out to be a clear sonar return of the hard chines of Anona’s stern, pointing north-west. The shipwreck sat still, upright and intact at 1258 m (4125 ft) water depth. The stern would become the point of origin for sediment sampling efforts by ROV and deep water multicorer spanning the next four years.

Anona has exhibited unique charm throughout its entire existence, first as the luxury steam yacht of an early 19th century industrialist, with elegant lines and lacy scroll work at the bow depicting the plant Annona squamosa for which it was named. Before Anona arrived at its resting place it had a second life as a cargo vessel during World War II. As it sailed to the British West Indies in 1944 carrying potatoes, the stern of the vessel, now so familiar to my eyes after four ROV expeditions, experienced a catastrophic structural failure, causing the vessel to sink to the seabed. There it began a third life as an island for microbial diversity.

As our team began sampling sediment in direct proximity to the wreck during the first expedition, I wondered: what impact does a large (42 m x 5 m x 3 m) steel shipwreck have on life on the seabed? I am not the first to ask this question generally of shipwrecks. Even my colleague Mr. Daniel Warren, a marine archaeologist, wrote on Anona’s discovery in 2002 “it is now home only to countless anemones and crabs in a world of eternal darkness beneath the sea”.  I have since corrected Daniel – this place is home to much more than meets the eye.

Is undisputed that shipwrecks become artificial reefs and islands of biological diversity for macroorganisms. The cultural, historical, and archaeological value of shipwrecks is established. Their role and that of other built structures in marine ecosystem processes however is only beginning to emerge. How shipwrecks impact the surrounding seabed and invisible microbial life on the seafloor was unclear. Our paper addresses that knowledge gap with Anona as a case study on how human built environments (places and things made or modified by humans) shape microbial life in the ocean.

This study is the first to provide a molecular view of the bacterial microbiome in the seabed surrounding a built structure in the deep sea. We discovered bacterial diversity and richness increase with proximity to the shipwreck along four intensively sampled sediment transects spanning 0 – 1000 m extending from Anona’s port and starboard sides, and from bow and that familiar stern. The sampling strategy tested if shipwrecks function as islands of biodiversity for microbiomes, creating patchwork habitats with influence radiating out into the seabed. Our work revealed a biological 'halo' around the shipwreck, often called an ecotone characterized by high diversity and unique taxa located ~200m from the hull of the shipwreck.

Ecotones have been observed surrounding natural habitat features (vents, seeps, whale falls) in the ocean and mark a transition between one habitat to another, in this case, shipwreck habitat and surrounding seabed. The distance the ecotone presented away from the shipwreck is larger than that of natural habitat features. This finding deserves attention, as the timescale of modern built features like WWII shipwrecks is decadal compared to centennial or millennial time frames of geological habitats. This may be attributed to the size, relief above the seafloor and other such unique physical and chemical characteristics of built habitats.

Video of coring operations near the bow of the Anona shipwreck during expedition PS19-06 on board R/V Point Sur in September 2018. A helpful crab was on site to oversee the operation. Video captured by the ROV Odysseus.

As we report in the study, our discoveries are interesting in isolation. Indeed, Anona is uniquely charming, and well suited for the investigation we undertook; even with all of its charm and history, it is not an isolated entity. Anona is joined on the seafloor of the Gulf of Mexico with more than 2,000 other historic shipwrecks, 7,100 energy related structures installed since WWII and ~45,000 miles of pipeline. These built habitats require scientific attention, as our study highlights they leave a lasting, large and discrete signature on seafloor microbiomes.

Anona’s first life, its working life of luxury and commerce lasted only 40 years. Its second life on the seabed is already nearly twice as long, and evolving in ways that could not have been predicted when it sank. It is imperative we continue to study built habitats to understand how human infrastructure is shaping biodiversity in the ocean. Understanding this will also lead to technological advances in seafloor awareness and discovery. I hold that Anona’s stern is not an ending, but a point of origin for coupled human-environment research in the deep sea.

The authors of this study gratefully acknowledge The Defense Advanced Research Projects Agency (DARPA) Biological Technologies Office and the National Oceanic and Atmospheric Administration’s (NOAA) Ocean Exploration and Research Program for support and for creating a collaborative and innovative environment for ocean research to thrive in.

I am a marine microbial ecologist studying the biogeography of the deep sea, and the impact of change on marine and estuarine communities. My work spans continental margin sediments artificial reefs, marine methane seeps, and oxygen minimum zones. I am an amateur poet, and my muse is the ocean. 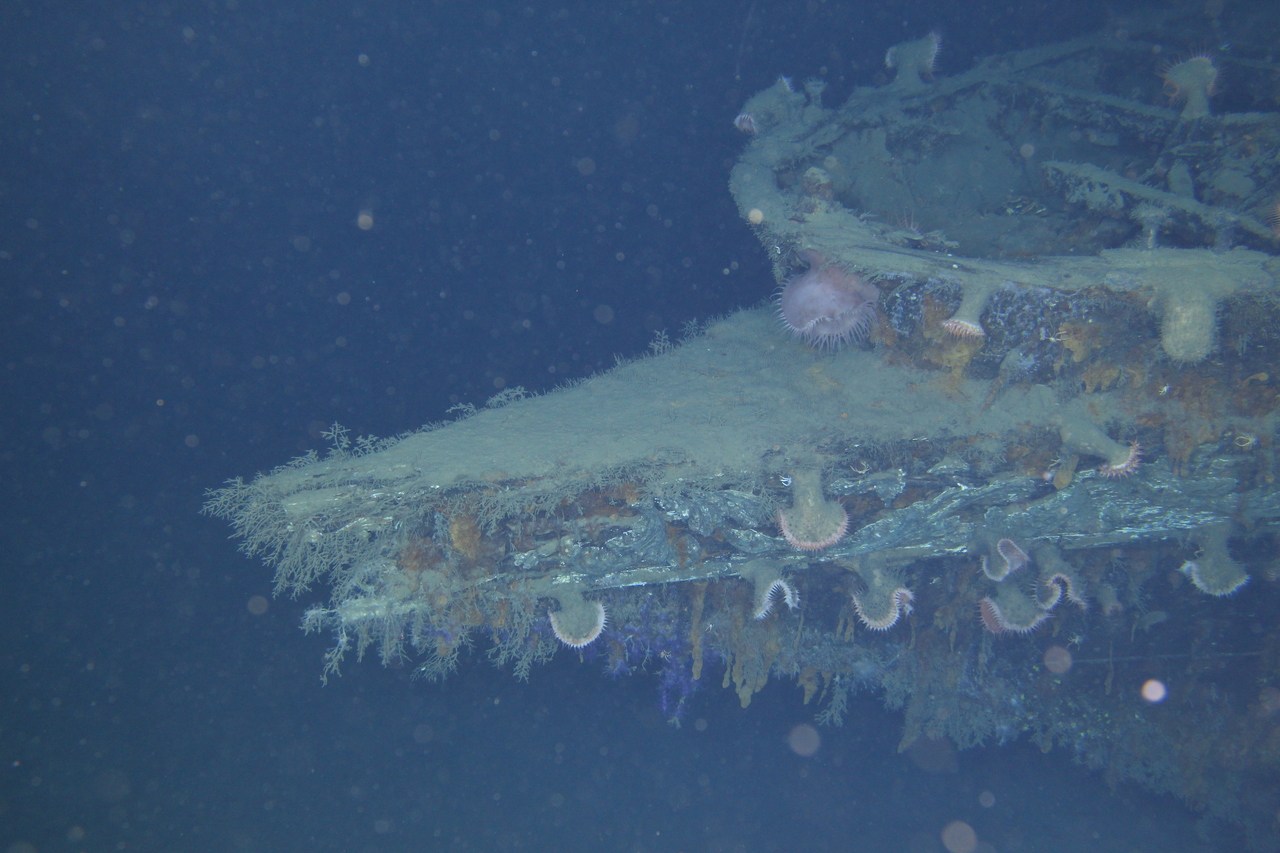