Decadal changes in temperature drive upward but also downward trends in epidemic size. It is not about control vs. climate, but about control in the context of changing climate.
Mercedes Pascual
Professor, University of Chicago
Follow
Like Be the first to like this
0

The effect of climate change on highland malaria transmission remains unclear because of increasing and decreasing trends. Here, Rodó et al. analyze malaria case data and climate data for the Ethiopian highlands from 1968 to 2008 and find that changes in temperature and associated climate variabilit…

It stands to reason that global warming should impact the spread of malaria in the populated highlands of East Africa and other parts of the world. After all, temperature decreases with elevation and sufficiently cold temperatures become limiting for the population growth of the mosquito vectors that transmit the disease, and for the development of the parasite within these vectors. Too slow a development of the parasite means that the mosquito will not live long enough to transmit it. Thus, the parasite finds itself in a race against time as temperatures decrease.  It is indeed at the edge of the geographical distribution of vector-borne infections that we expect climate variability and climate change to have the strongest effects on transmission, as it is exactly here that climate factors are by definition most limiting to transmission. For malaria, these regions of heightened sensitivity to climate are found in highlands and desert fringes, where temperature and rainfall play limiting roles respectively. As a result malaria is epidemic and of low transmission, with seasonal outbreaks of variable size.

Given these observations, the reader may be surprised to learn that we spent about a decade  (up to 2014) involved in a heated debate on whether warmer temperatures drove the observed increasing trend in malaria epidemic size from the 1970s to the 1990s in E. African highlands.  The difficulty lied in quantifying and demonstrating effects on the basis of noisy and incomplete data in systems whose responses to the environment are nonlinear, and in addressing long-term change when multiple potential drivers exhibit trends. Increased frequency of drug resistance, enhanced land-use change and human movement, are all examples of postulated alternative drivers.

We returned to highland malaria in this part of the world in our recent publication motivated by another striking patten: epidemic size declined at the turn of the century for both parasites, Plasmodium falciparum and Plasmodium vivax. Could climate play such a strong role in highland malaria that the so-called slowdown in global warming at the beginning of the 21st century drove a corresponding “slowdown” in epidemic size?  Here, we should pause to emphasize that the warming slowdown was a transitory phenomenon in the decadal variability of the global climate system.

This question was tantalizing because control efforts provide an obvious alternative explanation for the turnaround in the incidence trend, and one may be led to the simple if not simplistic conclusion that changes in climate do not matter because control would ultimately offset its effects. We knew however that for the region of our study this explanation could not hold: intervention efforts were intensified only later, in 2005, and not at the turn of the century. It was therefore intriguing to consider that a global phenomenon of the climate system could be so clearly reflected in the regional malaria patterns.

How to show this coupling convincingly beyond a simple and problematic correlation? It is plainly hard to "explain trends" because any two temporal trends can show a statistical association. A mathematical model for the population dynamics of the disease was one possibility; it allowed us to consider a counterfactual computational “experiment”. Namely, we asked what would have been the predicted size of malaria epidemics post-2000 with an epidemiological model informed only by the malaria and temperature data before this time. That is, if everything else had remained the same, what would have been the predicted effect on reported cases of the observed changes in temperature? Within the uncertainty of the estimated parameters of the model, we showed that the changes in temperature could account for the observed slowdown in malaria.  Even for us, who were predisposed to expect a temperature effect, this result was surprising in revealing such a strong coupling between climate and disease dynamics.

Importantly, this result meant that for this region of Ethiopia, changes in climate at the turn of the century helped the control efforts that followed.  The decadal slowdown in global warming acted synergistically with control efforts, setting the stage for smaller epidemics than those in 1997-1998. From 2005 onwards, reported cases declined sharply as expected from the introduction in the region of strong intervention against the mosquito and the parasite.

A main implication of our findings is that it makes no sense to ask about climate vs.  control to explain trends and multiannual cycles of incidence in highland malaria.  A much more relevant question is that of control in the context of climate change and variability.  We cannot properly evaluate the success of intervention efforts against malaria in epidemic regions without considering the climate context.  We run the risk of over-estimating success and relaxing control too early or out-of-sync with climate cycles.

Our study went into further evidence with statistical analyses on the connection between global and regional climate and incidence. We considered especially changes of the El Niño Southern Oscillation (ENSO) and the Pacific Decadal Oscillation (PDO), climate phenomena concerning the Pacific Ocean and acting as major drivers of climate variability around the world. These changes have been  implicated in  the transitory slowdown of global warming.  The evidence of associations at multiple spatial and temporal scales, from seasonal to decadal, further underscored the close coupling of malaria to climate.

In a long and constructive exchange with the referees, we covered lots of ground on what was known about connections of global warming to changes in ENSO and the PDO, to those in the regional climate of Ethiopia.  At least for one of us who is not a climate expert, this was an enlightening experience on the complexity of the climate system and on the linkages across spatial and temporal scales. We highly recommend a recent review on decadal changes of the different oceans and their inter-relation in the context of climate change (Cai et al. 2019). The picture that emerges is astonishing in its complexity.  It is also a clear warning message (at least to the non-climate expert among us) that global warming is much more than a trend, and that the temporal scales that we experience more rapidly and directly in epidemiology can have strong and complex impacts.

To close, it is intriguing to speculate on the potential reach of decadal changes in climate more broadly on malaria in East Africa, perhaps even beyond highlands, in more endemic seasonal settings. Only a comprehensive effort to assemble retrospective records could tell. Unfortunately, we lack such extensive records to address the dynamical response of one nonlinear system to another. Sustained surveillance in multiple selected locations would be invaluable. Even farther afield, decadal changes in climate may have left a signature in the epidemiology of other vector-borne and water-borne infections at the turn of the century.  If and where this is the case, temporal patterns that appear as encouraging trends of decreased disease risk may revert course, and interact in complex ways with cycles in both climate and intervention efforts.

Acknowledgement: The image of the highlands of Ethiopia was kindly provided by Dr. A. Gebreselassie 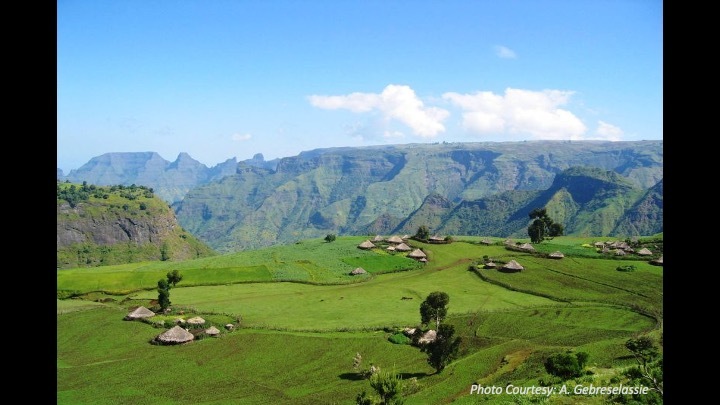 Decadal changes in temperature drive upward but also downward trends in epidemic size. It is not about control vs. climate, but about control in the context of changing climate.