Fungus-growing insects are fascinating animals, able to cultivate the fungi they feed on using mostly plant-based substrates. Fungus-growing ants (subtribe Attina), termites (subfamily Macrotermitinae), and beetles (subfamilies Scolytinae and Platypodinae), differ not only regarding evolutionary histories, but also vary on geographic distribution, taxa of the fungal symbiont, and crop rearing [1]. But intriguingly, the bacterial communities associated with their fungal environment exhibit marked similarities in taxonomic composition (i.e., a similar group of bacterial class and genera), sustaining the idea of a convergent host-microbiota association [2]. At the beginning of my masters’ research, my coauthors and I assumed that despite the similarities in taxonomic composition, there could have differences on functional profile reflecting the particularities of each fungus-growing insect’s environment. Our study begun by comparing the microbiota of Atta sexdens rubropilosa and Mycocepurus goeldii, two fungus-growing ants with different foraging behavior, which are widely spread in Brazil and had not been included in former comparisons (Fig 1).

After sequencing and annotating the metagenomes from the fungus-gardens of both ants, the few significant differences between them could not support any delimited conclusion. The same happened when samples were included in a dataset containing the microbiota of other fungus-growing insects previously published [2]. The initial frustration motivated an extensive literature review, which ultimately changed our perspective: When considering fungus-growing insects as a group, could the taxonomic composition and functional profile differ from other host-associated microbiota? We were aware of several studies exploring which factors could determine the host-associated microbiota composition, emphasizing that both the host phylogeny and host diet could have a role in shaping the bacterial community [3,4,5]. As such information was not available to fungus-growing insects, we started to work on the hypothesis that the particular life-style of these insects could assemble a characteristic microbiota. Thus, we downloaded diverse publicly available metagenomes, and from two attine gardens’ metagenomes, our study turned into a comparative analysis of 155 host-associated metagenomes grouped according to host life-style.

When comparing the microbiota of fungus-growing insects to omnivorous and herbivorous insects, corals and marine worms, omnivorous and herbivorous vertebrates, we found evidences of the taxonomic composition as distinctive of the fungiculture environment (Fig 2). Though having functional overlapping with the gut microbiota of herbivorous and omnivorous hosts to some extent, differentially abundant functions were codified by the microbiota of fungus-growing insects in pathways related to lignocellulose breakdown, detoxification of plant secondary metabolites, metabolism of simple sugars, fungal cell wall deconstruction, biofilm formation, antimicrobials biosynthesis, and diverse nutrient cycling routes. That could indicate the microbiota as adapted to characteristic conditions of fungiculture, including raw plant biomass, simpler carbohydrates and lignin-derivatives resulted from fungal metabolism, fungal biomass, and aerobic environments. The functional profile of the microbiota seems to reflect microhabitats available in fungiculture, which in turn could define the taxonomic and functional configuration of these communities. Hypothetically, a microbiota adapted to the fungiculture conditions could integrate metabolic networks important for ecological process of these symbioses, raising a branch of investigation possibilities.

The full paper may be found at: 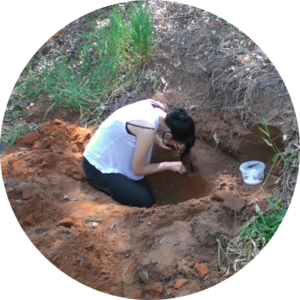