The formation of a fruit body is a key stage in the life cycle of many fungi. Still, sporocarps are vulnerable, as they can be readily eaten by birds and small mammals, colonised by invertebrates or infected by parasites. The complexity of communities thriving inside sporocarps is largely unknown.

This publication revealing the diversity and composition of fungicolous fungi residing inside fruit bodies results from a side-project that mature during my Marie Curie postdoctoral fellowship (2014-2016) with Håvard Kauserud at the University of Oslo.

Issakka, an old-growth spruce-dominated forest in northeast Finland, was kind of a natural choice to start with, where both Jenni Nordén and Otto Miettinen had performed fungal inventory surveys. Ari Meriruoko (Metsähallitus, Kuhmo) provided us with detailed information about the region where we were guided by Teppo Hello. The Finns know their forest for sure! With Håvard we headed to Issakka for fieldwork. Håvard stopped the car and said "I think we reached the site". But based on the detailed instructions we previously had, I was skeptical and replied "I do not think so, Ari mentioned that we first need to go uphill before starting to sample". He smiled and replied back "Sundy, this is a hill in Finland!".

Having grown up on an island, I could finally experience the meaning of 'exotism'. Issakka is a magical place! Rich in dead wood, the forest represents a biodiversity hotspot for many wood-dependent organisms, including wood-decay fungi where several species fruit at the same time, allowing intra- and inter-species comparative studies. In contrast to many of our study sites in Fennoscandia, our targeted polypore species are abundant in Issakka. We collected more than 350 fruit bodies in only 2 days, and this of course without counting all the extra that Håvard always collect during fieldwork (With time I ended up doing the same). We left Kuhmo region with a large sample size and heads full of amazing memories.

We long debated about how to optimise DNA metabarcoding for conducting such a study, where both "the host and its guests" are fungi. Targeting the ITS region with universal primers will amplify both the host fungi and the fungicolous fungi. Though designing blocking primers to target 'only' fungicolous fungi was an alternative solution, but not a realistic task in our case as we study 11 species that are phylogenetically distant. Besides, we don't have enough perspective about what blocking primers are really inhibiting in a PCR. So, still more descriptive studies are needed with universal fungal/eukaryotes primers to reveal this unknown diversity of fungicolous fungi inhabiting fungi. Consequently, the sequencing depth was another focal point, we require deep enough sequencing to detect fungicolous fungi, as we expected the fungal host DNA to be dominant and preferentially amplify. Though very explorative, we posited the hypotheses right in the beginning (may be not as clear as they occur now in the publication- thanks to the reviewers). But, we had absolutely no idea that the proportion of fungicolous fungal sequences will be that significant (2.8-39.8 % of the total ITS sequences), suggesting that we not solely reveal possible fungal airborne contaminants but indeed fungicolous fungi with ecological functions. To be honest it was a real (and exciting) surprise for all of us. Gontran and Synnøve timely joined in the analyses.

Results and good team spirit definitely generate more ideas. Afterwards, we team up with Tone Birkemoe, professor in entomology at NMBU, and investigated the communities of arthropods, as they might play a key role in structuring the community of fungicolous fungi inside the sporocarps, which is now part of Lisa Fagerli PhD work (stay tuned for the results). Taken together, I would say that sporocarps are not only diverse in size, scent, persistency and colour, but are complex ecological niches hosting specialist, as well as generalist organisms, and studying together may provide valuable information about the community assembly processes in the sporocarps.

Check out the papers: 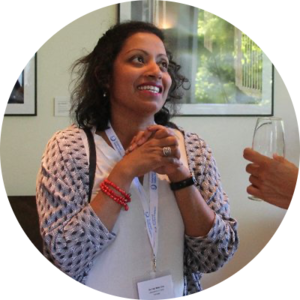 Sundy Maurice (Mauritian citizen) is a researcher at the University of Oslo, Norway where her research is focus on the effect of forest management and habitat loss on genetic diversity of wood decay fungi.
Follow