In this study we investigated the interplay of respiratory viral infections; exploring how prior infections alter the nasal transcriptome, inducing an antiviral state which in turns reduces subsequent infections.
John Tregoning
Author: Infectious. Reader in Respiratory Infections., Imperial College London
Follow
Like Liked by Evelina Satkevic
0

As any of you who have children, in fact anyone who has ever met, seen or been a child, there are all sorts of things up their noses, fingers, lego pieces, but more importantly viruses. They are awash with different viruses. We are particularly interested in the effect of one viral infection on another.

We investigated this in the context of a vaccine study. There is an influenza vaccine that is live, but genetically weakened; called live attenuated influenza vaccine or LAIV. This vaccine is sprayed up the noses of children where it causes a limited infection that can train the immune system and protect against future influenza infections. This gives us a safe way to explore how flu infections happen in children and what factors affect infections particularly the immune response. This study was performed in The Gambia by Dr Thushan de Silva.

In our recent study: Prior upregulation of interferon pathways in the nasopharynx impacts viral shedding following live attenuated influenza vaccine challenge in children we looked at the influence of the presence of other infections on LAIV infection. The first thing we measured was the presence of viruses in children – remarkably 42% of children had detectable viral RNA. This reflects other studies we have done where we saw that 20% of children had another viral infection. For the analysis we then compared the responses in children with and without another infection and what impact this had on how well the LAIV viruses could establish a local infection in the nose .

In particular, we were interested changes in the genes in the nose due to infection with other viruses. These changes in genes give us a more global sense of the response to infection. What we are actually measuring are changes in RNA levels, called the transcriptome. We can group the individual genes into families based on their function. We are particularly interested in genes associated with the immune response.

What we observed in our study was that children who had another infection at the time of LAIV immunisation had far greater levels of genes associated with signalling through a pathway called type I interferons. These genes are part of the innate immune response to infection and switch on an antiviral state, which makes it more difficult for other viruses to infect them. In line with this, children with higher levels of the anti-viral genes had lower LAIV viral replication.

These findings might help us understand differences in outcome following infections such as flu and how other viral infections immediately before exposure could influence this.

Do dirty viruses make you sicker? 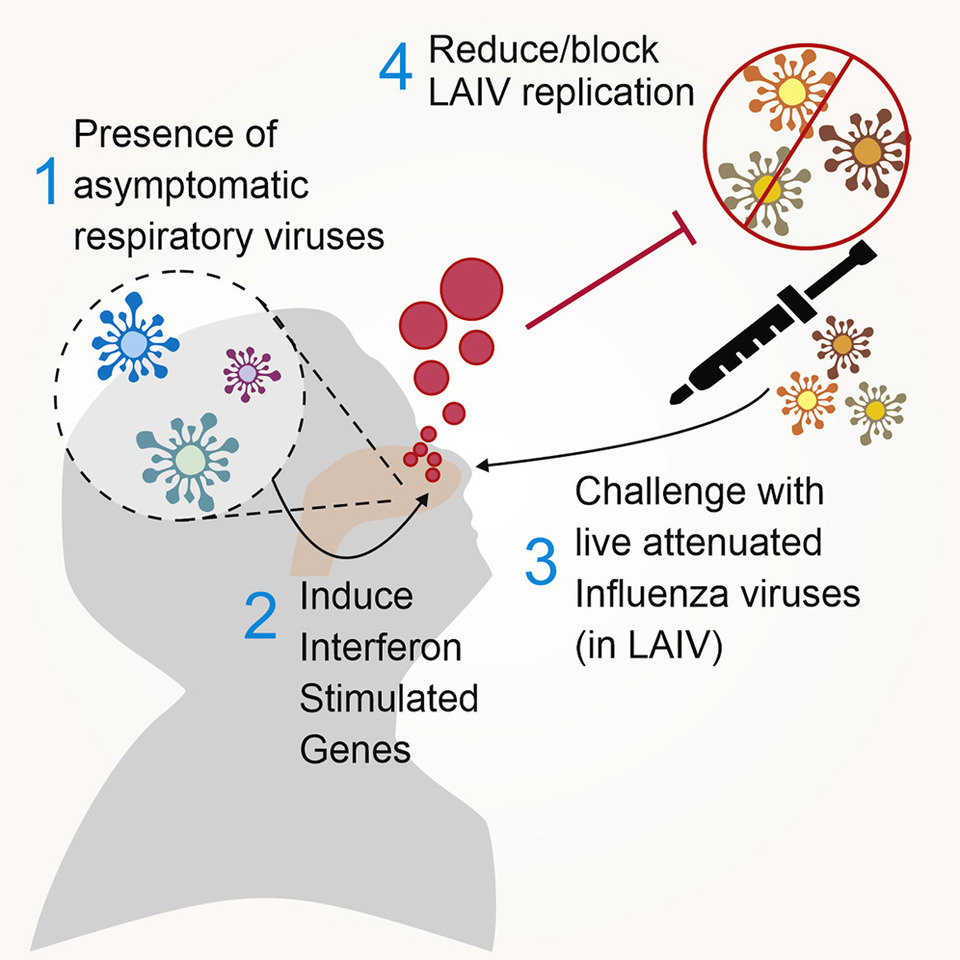 In this study we investigated the interplay of respiratory viral infections; exploring how prior infections alter the nasal transcriptome, inducing an antiviral state which in turns reduces subsequent infections.