Stuck in the middle with you: Coevolution in microbes

The emergence of coexistence from strong competitive interactions help reinforce that evolution in the context of a community is far different from evolution in isolation.

Across all orders of life, from the smallest microbes to the largest mammals, one thing is for certain: no species evolves in isolation. All of them are embedded within communities, and have to evolve within the context of interactions with other species. When resources in environments – space, light, food, etc – are limited, organisms can either get better at acquiring those resources than others (competition) or learn to live together in harmony (coexistence). In general, competition is more common than cooperation, but there are also mechanisms (outlined in Chessons Modern Coexistence Theory) that can promote coexistence.

So, can two species that compete for the same resource evolve to co-exist? To answer this, we used experimental coevolution of two species, E. coli and S. cerevisiae. Both would be competing for essential resources at the start of the experiment, and thanks to the vast genetic resources available for these model organisms, we could investigate in depth the genetic causes of any evolutionary changes we saw.

One thing we noticed immediately was that these species are competitively mismatched in our environment - E. coli drove S. cerevisiae extinct in 58 of our 60 populations after just 6 weeks of co-evolution! To remedy our now too-low replicate count, we founded a new set of co-culture populations from the two that remained and continued on as before for another 8 weeks. At this point, whilst E. coli outcompeting S. cerevisiae in co-culture was still the most common outcome, we were starting to see signs of coexistence. Now, 4 of the 60 populations contained both species, and S. cerevisiae were even outcompeting E. coli in some populations! On top of this, the ratio of species within these co-cultures were consistent and ecologically stable.

Now that we had found that initially strongly competitive species can evolve to coexist together, the next big question was what genetic changes had occurred to allow these species to coexist? Naturally, we expected to see multiple genetic adaptations in S. cerevisiae that would help explain its persistence in co-culture, as it was initially the weaker species of the two. However, we saw the exact opposite! E. coli was the species that showed the most evidence of co-culture specific genetic changes, namely in the genes btuB and fhuA. Even though these genes did not increase the fitness of our evolved strain compared to the ancestor, they were able to alter the equilibrium frequency in co-culture with S. cerevisiae, suggesting these mutations are only beneficial in a community context.

One interesting aspect of coevolution experiments, as opposed to studies on single species, is that extinction is on the table. In single species experiments, beneficial mutations and novel ecotypes always have the potential to arise. However, in coevolutionary systems, there is a strict time limit on how quickly the least fit species must adapt to coexistence before it is driven from the population completely. And this might help explain the surprising genetic changes we see. In most cases, S. cerevisiae are driven extinct from co-culture, unable to adapt quickly enough. However, in the rare cases that they do, a strong selection pressure is subsequently applied to E. coli to adapt to the new co-culture environment, leading to the genetic changes in fhuA and btuB.

Figure 2. Schematic representation of the sequence of evolutionary steps leading to the evolution of coexistence.

We are really excited to continue exploring co-culture dynamics with this system, and hope to have more to come in the future! 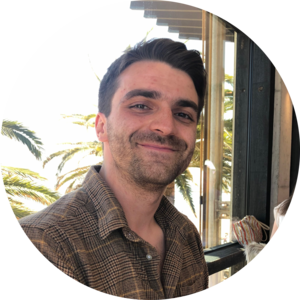