In this study, Adi Stern and colleagues use full genome sequences of SARS-CoV-2 to look at the rate of infections in Israel. They report that social distancing had a significant effect on minimising the rate of transmission, and find evidence for transmission heterogeneity (superspreading events).

Following the emergence of SARS-CoV-2 in China, the virus rapidly spread around the world. The first case of SARS-CoV-2 in Israel was detected in mid-February and was followed by a steady increase in case reports. This led the Israeli government to increasingly impose strict measures of social distancing up to a near-complete lockdown. These measures were effective in reducing case counts, which peaked in early April and declined steadily until May. Unfortunately, due to the relaxation of social distancing in May, case counts have dramatically increased and Israel is currently experiencing a severe second wave of infections.

As the epidemic took off, there were many unknowns regarding the dynamics of virus spread. We reasoned that genomic sequences of the virus held many answers to the unknowns. We were particularly interested in inferring the incidence of the virus in Israel, that is, the number of new people becoming infected, and whether case reports reflected these inferred incidence levels in Israel. We further wished to estimate which countries were responsible for importing infections into Israel, and the efficacy of interventions in slowing the spread of the virus.

In our recent study, we collected and sequenced virus samples from hospitals spanning the entire geography of Israel. Based on mutations identified in these samples, along with those identified across thousands of viruses sequenced around the globe, we sought to track virus spread into and within Israel. By doing so, we were able to estimate that about 70% of the introductions into Israel were from the United States, much lower than the proportion inferred when tracking incoming travelers. This discrepancy led us to infer that during a gap in policy that lasted about two weeks in March, travelers from the U.S were not quarantined and contributed to massive spread of the virus.

To understand the rate at which the virus was transmitting within Israel, we leveraged novel methods that combine sequencing data with epidemiological models. We estimated that prior to social distancing each infected person within Israel infected an average of 2.5 other people. However, following social distancing measures, this average number dropped to about 0.7. Using the evolutionary relationships between the sequenced sampled, we were also able to estimate the extent of so-called virus ‘superspreading’. Our estimates indicated that between 2-10% of infected individuals were responsible for 80% of the onward transmission. These findings are consistent with findings from the United States (Lau et al. 2020), India (Laxminarayan et al. 2020), Hong Kong (Adam et al. 2020), and others. Looking forward, we believe it is important to identify the scenarios that contribute to superspreading dynamics, which is likely a combination of host behavior (e.g., abundant social contacts), intrinsic host factors (e.g. the ability of the host immune system to clear infection), and potentially viral factors (initial infectious dose, viral genotype).

Taken together, our findings demonstrate the power of routine sequencing of viral pathogens to understand how they spread between hosts. SARS-CoV-2 is now the most sequenced outbreak in history and our paper is one of many examples where sequencing data have been combined with traditional epidemiology to glean novel insights. We hope these studies will provide the motivation necessary for sequencing to be made a key part of the continued response to SARS-CoV-2 as well as future viral outbreaks. 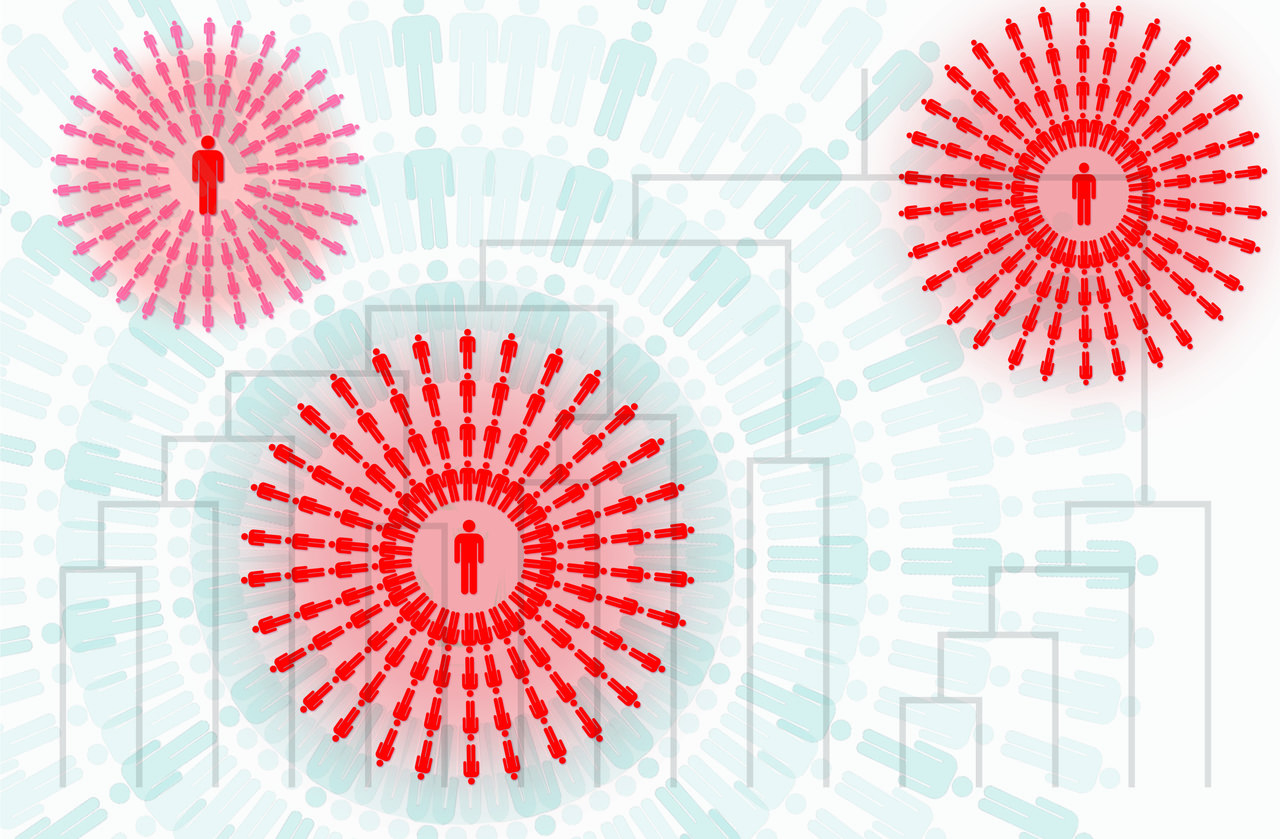