In this Article, the authors identify CcrZ as a protein that coordinates DNA replication and cell division in Streptococcus pneumoniae and other Firmicutes. CcrZ is localized to the division site by binding directly to the divisome protein FtsZ, and there it activates DnaA, the master initiator of D…

Bacteria are found in almost every habitat on earth and are among the fastest replicating organisms, some of them dividing in only a couple of minutes. Remarkably, even at these high reproduction rates, they still manage to accurately coordinate their growth with chromosome duplication, to no end up without DNA at all or to prevent their DNA to be unexpectedly “guillotined”. To explain how these different events are organized several studies have emerged since the mid-1900’s1,2 but still, years after, we do not fully understand how changes in cell size are correlated with initiation of DNA replication. Getting more insight into these mechanisms is particularly relevant for pathogenic bacteria as these processes involve essential factors that could potentially be targeted by therapeutic drugs.

This is the one of the reasons why we, at the Veening lab, focus on Streptococcus pneumoniae, which is one of the most critical human pathogens. Little is known about its cell cycle, but it can be simplified as this: cells elongate while duplicating their chromosome, and only once their cell division is completed, they can start a new round of DNA replication3. An important question that remains in this model is how can cells sense that DNA replication should take place once they are fully divided? Eukaryotic cells have checkpoints to precisely control these kinds of events, but bacteria do not have such control pathways.

With this question in mind, we sought to identify new cell cycle proteins and started off from one of our previous published studies where we had inactivated all uncharacterized proteins of S. pneumoniae (that were predicted to be essential) using CRISPR interference4. Our high throughput screening gave us an indication of which operons / genes were essential in our lab condition and we decided to focus on a protein that we named CcrZ (Cell Cycle Regulator protein interacting with FtsZ). This protein is very conserved in the Firmicutes phylum, like for instance in Staphylococcus aureus or Bacillus subtilis. We saw that in absence of CcrZ, S. pneumoniae was growing slower and was producing many cells without a chromosome. We were quite thrilled by these findings and examined CcrZ localization by fluorescence microscopy and found that it localizes at the middle of the cell, where the extension / division machinery is also located. In most bacteria, the maestro of this machinery is FtsZ, that forms a ring at mid-cell and interacts with several key proteins. Using different assays, we found that CcrZ directly interacts with FtsZ. At this point, we had identified an uncharacterized mid-cell protein controlling the DNA integrity.

Our main question at the time was whether this protein controls DNA replication (in absence of replication, one of the daughter cells will be anucleated) or chromosome segregation (if segregation does not occur, both original and replicated chromosomes will be contained in one of the two daughter cells). To settle the question, the most straight forward assay was to quantify how many origins of replication there were compared to termini on the chromosomes (we usually find two origins per terminus in wild type cells). We saw that without CcrZ, this ratio dropped, indicating that cells were barely able to replicate their DNA. At the same time, we were lucky to have isolated several strains that could grow perfectly in the absence of CcrZ, and these strains in fact carried mutations within DNA replication initiation regulators. These observations all pointed out that CcrZ controlled DNA replication initiation, but we still did not know exactly via which pathway.

One key experiment to determine at what level CcrZ acts, was to replace the native origin of replication by an exogenous origin which uses a different replication activator. In that case, removing CcrZ did not have any effect. This directly implied that CcrZ’s function was linked to the main DNA replication initiator DnaA. This regulator is controlled by several systems in bacteria to allow the cell to initiate replication once it has satisfied all its growth requirements, however, none of these regulators was previously linked directly to cell division. To place CcrZ in time and space in the cell cycle, we followed simultaneously the localization of CcrZ, the DNA replication machinery, and the origin of replication in time. With this, we could sketch a model where, once a new ring of division machinery is formed at mid-cell, DNA replication can initiate via CcrZ. Once replication is terminated, the cell waits until completion of the division before it is able to start a new round of replication.

This work describes for the first time a system that ensures that bacterial cells are fully divided before starting chromosome replication. In a way that resembles Eukaryotic systems. This rather simple mechanism provides an accurate timer for cellular replication, where division is the limiting step. What is the exact molecular mechanism behind the control of DnaA by CcrZ? Is this system conserved in most Firmicutes? How do cells sense that division is completed to start a new round? These important questions remain unanswered, but we are slowly starting to unravel the complex (yet seemingly simple at first glance) system of flawless bacterial reproduction. 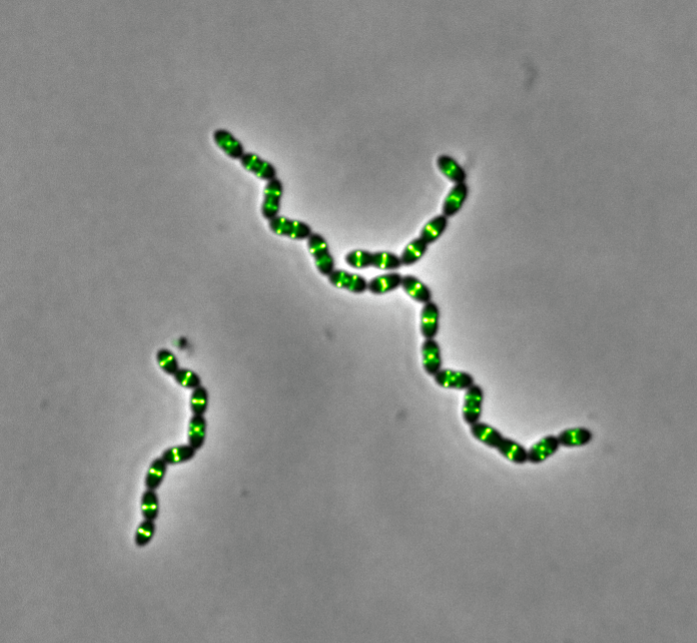