An interdisciplinary study on Methanobrevibacter smithii (Archaea) at the interface of cell, structural and evolutionary biology unveiling an ancient complex of SepF and FtsZ that represents a conserved part of the division machinery in Archaea, Bacteria and their common ancestor, the LUCA. 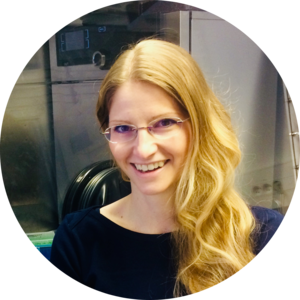 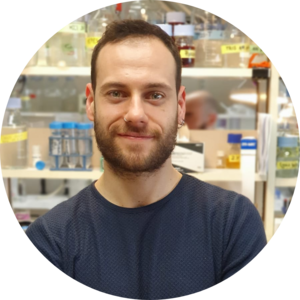 Despite the fact that we both worked at the Institut Pasteur in Paris at that time, we met in Sweden. It was summer 2019 in Lund where the EMBO meeting "Bacterial cell division: Closing the gap" was taking place - such a great meeting. Daniela Megrian, who was also participating in the meeting, was our common friend. She introduced us to each other during the first lunch, however this first meeting still did not break the ice. It was only several months later that we decided to embark on this exciting journey of studying the role and function of SepF in archaea.

Nika: In 2018 I arrived at the Institut Pasteur in the group of Simonetta Gribaldo to work on the cell growth and division modes in Methanobrevibacter smithii. It is a human-associated methanogenic archaeon that, together with its close relatives, has the peculiarity of possessing a cell wall made out of pseudo-peptidoglycan, which is otherwise absent in archaea. I was trying bioinformatically to identify homologues of bacterial cell growth and division genes in cell-walled archaea (Methanobacteriales and Methanopyrales). At the same time Daniela, who was a PhD student in the Gribaldo group was working on the cell wall and division cluster (dcw) in bacteria. And as it happens, we were chatting and I told her that besides FtsZ I found only a handful of bacterial cell growth and division homologues in my archaea, among them was SepF. In most Actinobacteria and Cyanobacteria, SepF is an essential component of the early divisome that orchestrates FtsZ-ring assembly and participates in membrane remodelling. This caught Daniela’s attention and we decided that it would be nice to see if the SepF in archaea was a transfer from bacteria, so we ran a tree containing both, bacterial and archaeal SepF sequences. The result of this tree astonished us - SepF of bacteria and archaea were clearly separated, indicating an independent evolution of SepF in the two domains of life and a common ancestor, also known as the Last Universal Common Ancestor (LUCA). This sparked the first idea of working on SepF in M. smithii.

Adrià: At that time, I had just finished my main PhD project on bacterial SepF from Corynebacterium glutamicum also at the Institut Pasteur, in the group of Pedro Alzari and supervised by Anne Marie Wehenkel. During my PhD we collaborated with Martin Graña from the Institut Pasteur in Montevideo to study the phylogeny of SepF in bacteria; very early we observed that SepF sequences from Firmicutes and Actinobacteria were perfectly segregated. However, we wanted to do a more extended analysis and we decided to contact the in-house evolution expert, Simonetta Gribaldo, and to set up the first meeting.

Nika: Initially, I was not part of this meeting, but Simonetta thought it would be a good idea to include me. She wanted Daniela and me to show the others our SepF tree and some preliminary results on the localization of FtsZ in M. smithii. Knowing that the Alzari group had recently worked on the C. glutamicum SepF this meeting would potentially yield a collaboration to help us work on the archaeal SepF - and so it did! Right after the meeting, Adrià and I started brainstorming and coming up with experiments.

Adrià: And brainstorming we did! As there is no genetically tractable system for M. smithii we had to come up with a bunch of interdisciplinary approaches, from structural biology to cell imaging and evolution. Given my experience with the C. glutamicum SepF, I proposed to Nika that we could purify the M. smithii SepF and try to crystallize it. Doing this would allow us to tackle the question if SepF and FtsZ are interacting in M. smithii and have a similar function like in bacteria. I also suggested purifying FtsZ and to do some biophysical assays.

Nika: Luckily, Adrià was there. I had never purified proteins before and I knew nothing about crystallography - I actually thought that all crystals look like diamonds or mineral crystals. Adrià showed me how to purify the proteins - which involved a lot of time in the cold room - and finally we got enough protein to give it to the crystallography platform at Pasteur. I got very excited while checking the drops as we saw diamond-looking crystals (duh!), but Adrià said that they were too beautiful to be true and that most likely they were salt. Nevertheless, we decided to reproduce them by hand, and again, textbook crystals appeared.

Adrià: I could not believe how lucky we were having such beautiful crystals - in the Soleil synchrotron they diffracted at 1.4 Å resolution. I really enjoyed building the model into such a nice electron density map. Once we had the final model, we had more questions than answers. The crystal structure did not show the FtsZ binding site that we had first described for bacteria. We were wondering if FtsZ could interact with SepF in M. smithii - in vitro assays indicated this, but we were puzzled about how that would happen. To answer our question we co-crystallized SepF in complex with a FtsZ C-terminal domain peptide. Soon after, we got nicely diffracting crystals and the model revealed a different SepF functional dimer and FtsZ binding site than that observed in C. glutamicum - something that seemed conserved in archaea according to our analysis.

Nika: After having high resolution structural data, I wanted to look how these two proteins were behaving inside the cell. As the cell wall of M. smithii is structurally different from that of bacteria and resistant to lysozymes, I needed to come up with an immunolabelling protocol specific for cell-walled archaea. Our collaborators from the University of Vienna, Simon K.-M.R. Rittmann and Hayk Palabikyan, prepared and provided us with the phage enzyme (PeiW) that specifically cleaves the stem peptide of the pseudo-peptidoglycan that helped me permeabilize the cells. After several weeks of painful trials, I finally got the perfect conditions and the immunolabeling experiments with specific M. smithii anti-SepF and anti-FtsZ antibodies showed that SepF and FtsZ were co-localizing at the septation plane. However, it seemed that SepF would then move to the prospective division plane in the future daughter cells before FtsZ. This behaviour of SepF “priming” the new division site was never observed before; after repeating this experiment many times and looking at it in high resolution on the 3D SIM, we were finally convinced that this is the case.

Adrià: Nika had indeed a hard time convincing us about the SepF/FtsZ localization, as we were used to seeing something else in bacteria. Once we had all the wet lab data, Daniela, Martin and Simonetta did their magic with the phylogenomic analysis and the evolutionary interpretation. Their analysis showed that both FtsZ and SepF date back to the LUCA where they likely formed a minimal cytokinesis system. Additionally, the peculiar SepF/FtsZ binding mode in Archaea might reflect an ancestral feature, while it diverged in Bacteria, potentially to accommodate the emergence of the complex machinery required to coordinate division with peptidoglycan cell wall growth.

Nika: Towards the end of writing the manuscript, we came to know that the group of Sonja Albers was working on SepF in the halophic archaea, Haloferax volcanii. Our two groups set up a video-meeting, exchanged results and decided that, since our approaches were very complementary and both showed that SepF is the FtsZ anchor in archaea, it would be great to publish the two stories back-to-back – and so we did. The results from this study and the Albers group contribute key insights into the largely understudied mechanisms of archaeal cell division and pave the way for a better understanding of the processes underlying the divide between the two prokaryotic domains. I think I can speak for Adrià and myself, and also for all the collaborators on this project, that we really enjoyed working together. It is quite impressive to see how much we all learned from each other through this project and what kind of results one can obtain from such an interdisciplinary approach. Funnily, it all started with some chitchatting in the office and motivated curious young researchers.

To check out the full story, follow this link:

How to cope with stress? A lesson from diverse human bacterial pathogens

Postdoctoral researcher at the Institut Pasteur in Paris (France), studying the cell growth and division in human-associated methanogenic archaea. Using a immunohistochemistry, cutting-edge microscopy, biochemistry  and bioinformatics. My major research motivation is the understanding of prokaryotic cell biology, its adaptations to various life styles and evolutionary history in "non-model" microbes.