A community from Nature Microbiology
Contributor Nature Comms
Behind the paper, News and Opinion

Secrets of a Winning Virus

In our Nature Communications paper on “Metabolic reprogramming by Zika virus provokes inﬂammation in human placenta”, we used metabolomic analyses to provide insight into the mechanisms that underlie the pathogenesis of congenital Zika virus infection.
Nabila Jabrane-Ferrat and Nabila Jabrane-Ferrat
2 contributors
Like Liked by Jean-Paul Motta
0

Zika virus (ZIKV) infection of pregnant women is associated with pregnancy loss and birth defects, but molecular insights for the aetiology are scarce. Here the authors show that ZIKV reprograms the host lipidome to facilitate viral replication, induce mitochondria dysfunction, and cause immune imba…

Zika virus (ZIKV) is a flavivirus, primarily transmitted to humans by the bite of infected mosquitoes. The recent epidemic of ZIKV in the Americas was deemed a public health emergency of international concern. Viral RNA can persist in vaginal secretions and semen for up to six month following the initial infection. Sexual transmission has also been documented. Maternal to fetal transmission and its association with the unprecedented surge of congenital microcephaly cases highlighted the teratogenic effect of ZIKV during pregnancy. We and others reported the broad cellular tropism of ZIKV at the maternal-fetal interface during the first trimester of pregnancy which could be tangible explanation for the irreversible tissue damage. Although ZIKV epidemic is behind, outbreaks are very likely recur and pregnant women remain particularly vulnerable to viral infections. Therefore, there is an urgent need to unravelling the viral-host cell interactions that lead to the devastating clinical manifestations of congenital ZIKV infection.

RNA viruses hijack different cellular machineries to accommodate the replication of their genome and the morphogenesis of progeny virions. To provide insights into ZIKV pathogenesis during pregnancy, we investigated the impact of the infection on the lipid metabolism of first-trimester placenta.

Using large-scale metabolomics, we discovered that ZIKV reprograms the placental lipidome to provide fundamental building blocks for the biogenesis of functional factories where genome replication takes place. We also showed that ZIKV infection controls the availability of fuel substrate by regulating the biogenesis of lipid storage organelles and perturbs the mitochondrial network functions.

Under oxidative stress, polyunsaturated lipids undergo peroxidation resulting in bioactive lipid mediators such as eicosanoids that regulate tissue homeostatic and inflammatory immune response. Our analysis bioactive lipid mediators revealed that ZIKV infection impairs the homeostatic equilibrium of pro-/anti-inflammatory molecules, leading to tissue damage. These changes in the inflammatory status of the placenta was associated with massive infiltration of fetal Hofbauer cells into the villous core when congenital infection occurs in the first trimester of pregnancy. Collectively, our study provides mechanistic insights on how ZIKV targets essential hubs of the placental metabolism that may lead to dysfunction of the placental and to a loss of its barrier function.

We expect that the reprogramming of placental lipidome, the impairment of mitochondrial fitness and the accumulation of bioactive metabolites would act as an amplification loop heightening inflammation and depriving the developing conceptus from essential lipids. Furthermore, both the increased oxidative stress and lipotoxicity have been incriminated in many pregnancy disorders including preeclampsia and fetal growth restriction. Owing to the key role of lipids in modulating immune cell functions, our findings pave the way for future investigations to understand how ZIKV-induced metabolic disturbance relates to the intrinsic innate immune defense mechanisms and barrier function of the placenta.

News and Opinion, From the Editors 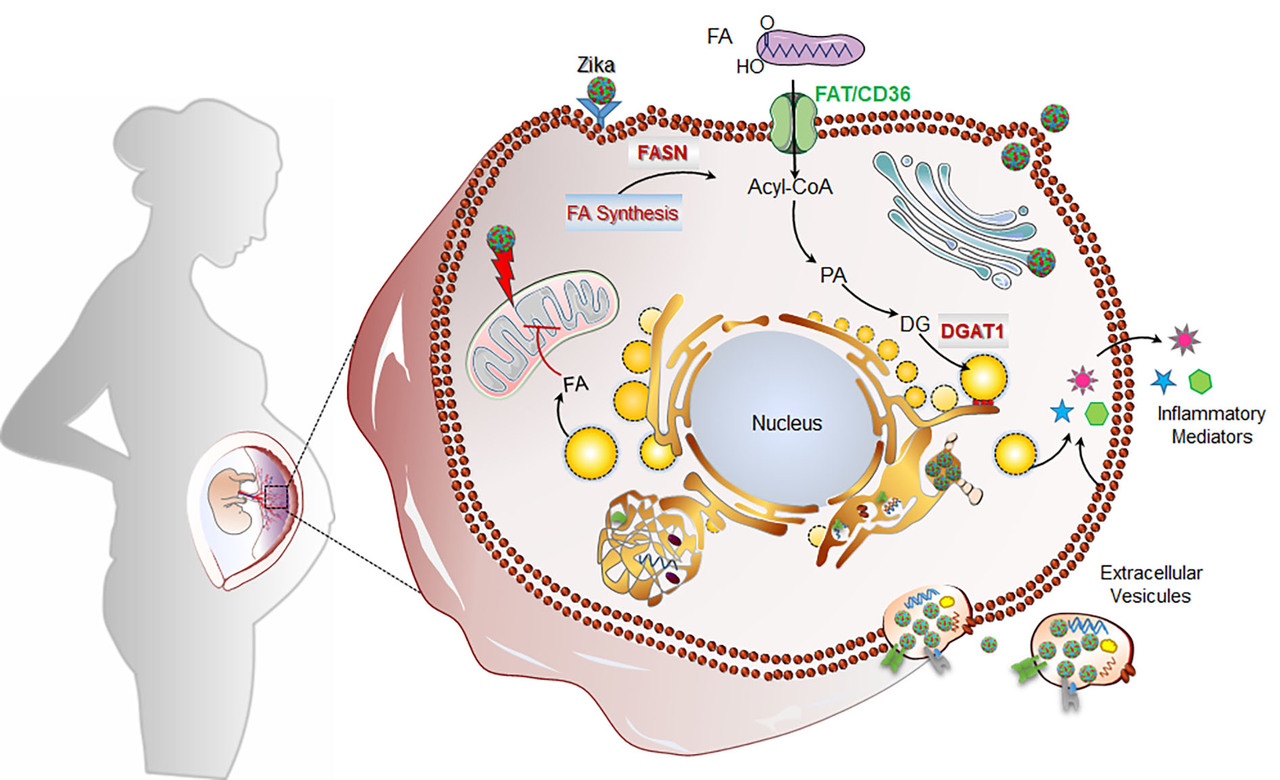 Secrets of a Winning Virus

In our Nature Communications paper on “Metabolic reprogramming by Zika virus provokes inﬂammation in human placenta”, we used metabolomic analyses to provide insight into the mechanisms that underlie the pathogenesis of congenital Zika virus infection.