Schrödinger's probiotics and the gut resistome

Studying the microbiome in the gut itself, rather than inferring from stool samples, reveals surprising impacts of probiotics on antimicrobial resistance. Understanding the complex interactions between probiotics and the gut microbiome can help reduce the spread of antibiotic resistance genes.

Probiotics can increase the number of antibiotic resistance genes in the human gut. They can also decrease it – or have no effect at all. In a rough analogy to quantum physics, the superposition of probiotics’ beneficial or detrimental effect on the spread of antibiotic resistance depends on the observer – in this case, the individual taking those probiotics, or more specifically, the individual’s microbiome.

Why do we care about the presence of resistance genes in harmless gut bacteria? Well, antimicrobial resistance is one of the top public health threats facing humanity, and there is urgent need in devising means to counteract the emergence and spread of antibiotic-resistant pathogens. The bacteria in the microbiome of humans (and livestock) can serve as a reservoir for resistance genes ("resistome"), which can then be acquired by pathogens.

An important contributor to the expansion of the resistome is the use of antibiotics. Probiotics are often taken during a course of antibiotics to supposedly counteract their detrimental effect on the microbiome. It was therefore hypothesized that probiotics can reduce the number of antibiotic resistance genes, however no superior resistome mitigation was found in probiotics-supplemented adults or infants. In fact, probiotic bacteria can carry antibiotic resistance genes, some on mobile genetic elements, and there are evidence in model systems (but not humans) that probiotics can transfer these genes to bacteria in the gut.

Are you confused yet? so were we.

Are probiotics a useful tool in the fight against the spread of antimicrobial resistance, or are they in fact a contributor to the problem? or maybe they have no effect whatsoever? The evidence are inconclusive, which made us think - are we even looking in the right place?

Previous studies on the factors that affect the human resistome, including antibiotics and probiotics, relied exclusively on stool samples to represent the gut microbiome. However, in 2018 we demonstrated that stool samples not only do not accurately reflect which bacteria are present in the gut itself (or which genes they carry), they can in fact be misleading when it comes to probiotics colonization in the gut.

In that study, we endoscopically sampled the gut of healthy volunteers in situ - from the rectum all the way to the terminal ileum - before and during supplementation with a commercially-available probiotic product. All participants shed comparable amounts of the probiotic bacteria in their stool, but only in some individuals we could detect colonization of probiotics in the intestinal mucosa, whereas in others we couldn't even detect them in the intestinal lumen. We therefore wondered how the differential colonization with probiotics might impact their effect on the resistome.

We first profiled the resistome in paired stool and endoscopic samples in a separate cohort of individuals who did not receive any supplement. We found that stool samples under-represented the diversity of the resistome in the gut itself, which convinced us that in situ sampling is important for accurately assessing the effects of probiotics on the resistome.

Indeed, when quantified in stool samples, the effect of probiotics on the resistome was already gone after just one day of supplementation. In contrast, we were able to determine that probiotics can reduce the number of antibiotic resistance genes in the gut itself. However, this beneficial effect was limited to the subset of individuals that we have previously identified as permissive to probiotics colonization.

I will let you think about it for a second. In the meantime, I want to draw your attention to this finding - when we quantified the effect of antibiotics (ciprofloxacin and metronidazole) on the resistome in stool samples, there was considerable person-to-person heterogeneity and overall, no significant increase in the number of resistance genes; a significant increase was only evident in endoscopic samples from the same individuals. 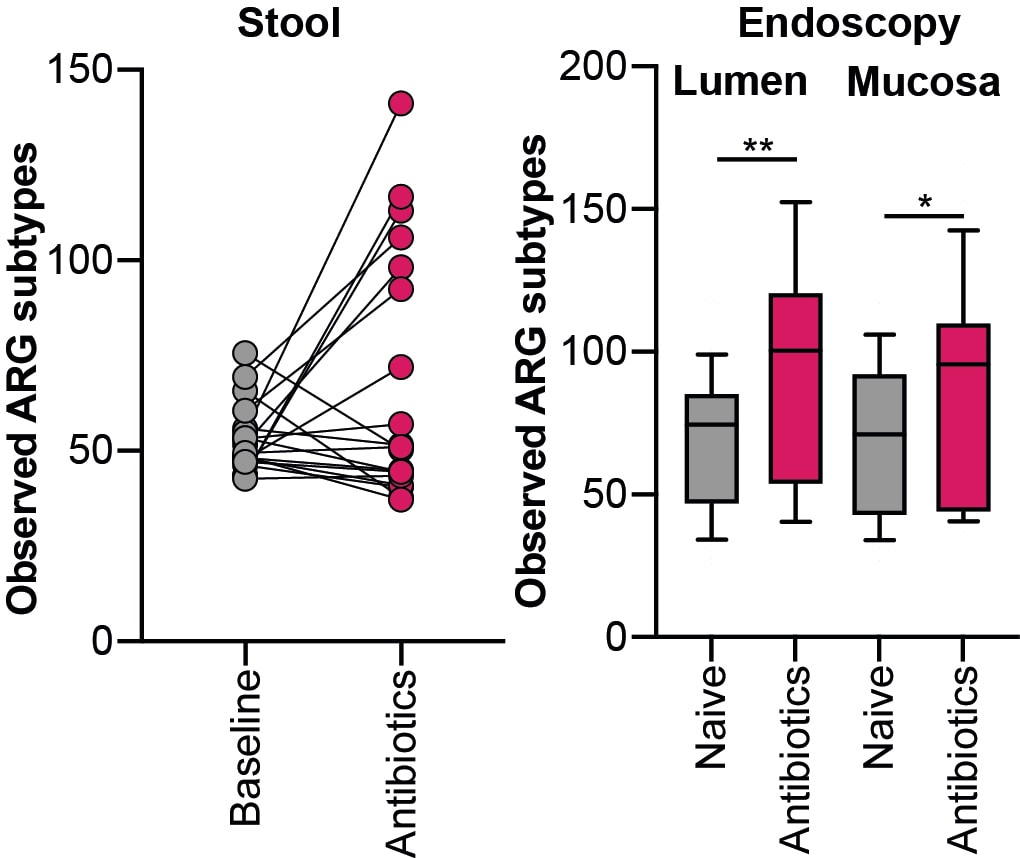 Antibiotics-associated increase in the number of antibiotic resistance genes is observed in situ (right), but not in stool samples (left). Adapted from Montassier et al, Nature Microbiology 2021.

OK, so what about those probiotics and antibiotics?

These antibiotic-treated individuals were split into three groups post-antibiotics: they either received probiotics, or their own pre-antibiotic microbiome (autologous fecal microbiome transplantation), or no post-antibiotic treatment whatsoever. In this cohort, we previously reported that probiotics actually delay the recovery of the microbiome composition, diversity, and quantity to the pre-antibiotic state. How will this impact the resistome? 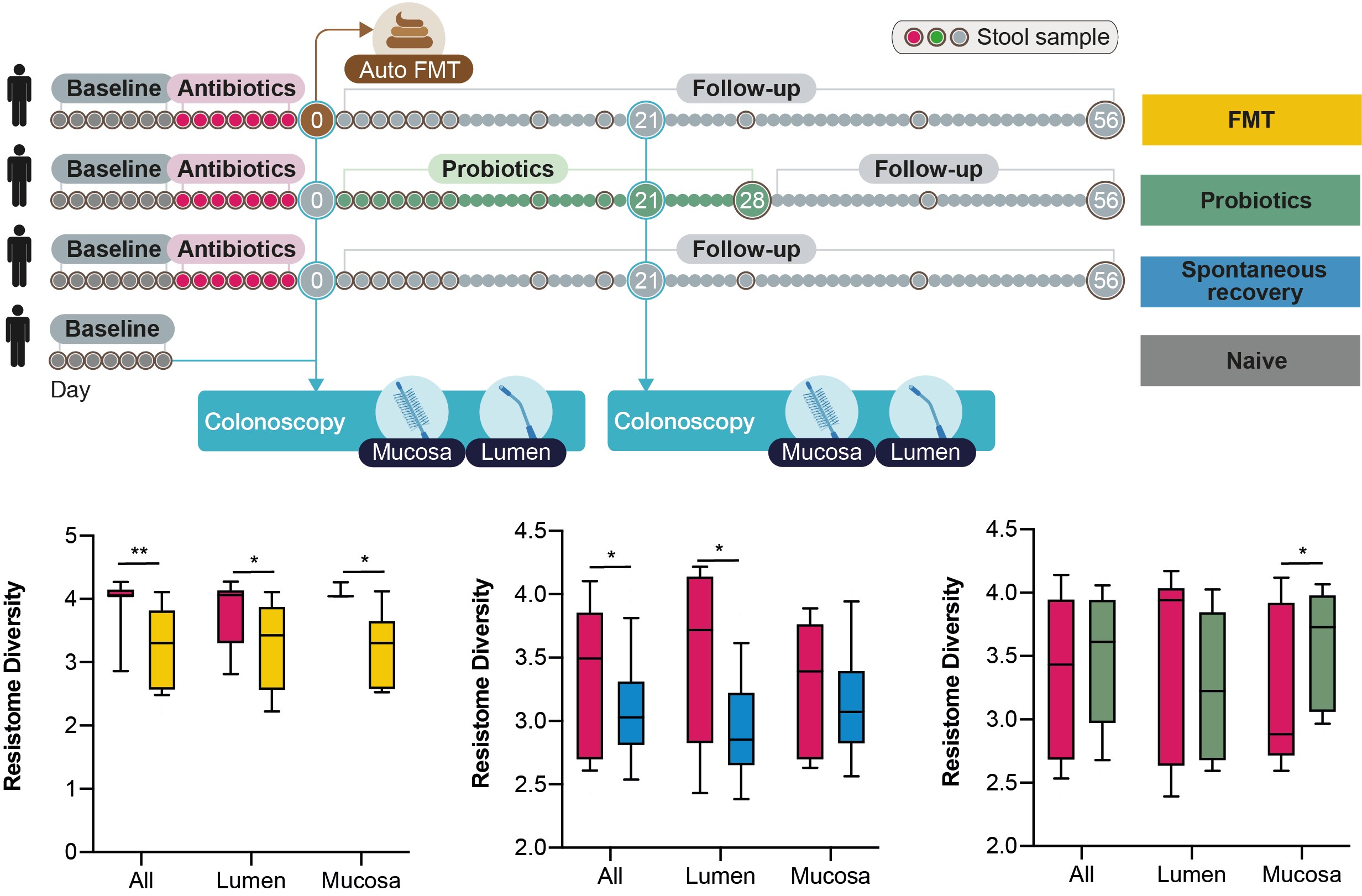 Surprised by these results, we validated them in mice that received the same antibiotics-probiotics protocol. Not only were the results similar between the two organisms, we even found that in both humans and mice, the genes that increase in their abundance encode for resistance to the clinically-important antibiotic vancomycin.

If so, where did those genes come from? Turns out, probiotics had a similar effect on the antibiotics-perturbed gut ecology in both humans and mice. They inhibited the recovery of most species, but they did allow bloom of a selected few, and it was those bacteria that bloomed exclusively in the antibiotics-probiotics perturbed gut that carried the vancomycin resistance genes.

Clearly, these findings require additional validation in other human cohorts, with different antibiotics and probiotic supplements. Our results highlight two important factors to consider in the design and analysis of those future studies; First, the importance of in situ sampling of the gut, and second, the need to perform per-person analysis, rather than relying on potentially misleading averages. 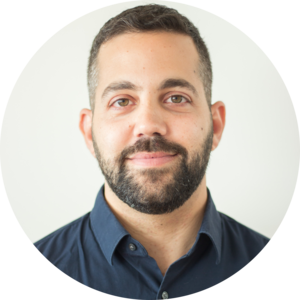