This story is about selecting cows with the best microbiome for themselves and our environment
Marina Martinez-Alvaro
Postdoctoral Researcher, SRUC
Follow
Like Liked by Evelina Satkevic
0

Metagenomes from 359 steers demonstrate a strong relationship between host genomics and microbial gene abundances, particularly those correlated with bovine emissions of methane.

The rumen, the largest of the cow’s four stomachs, is a unique, bustling site of fermentation, where fibrous food (e.g., grass) is converted by symbiotic microbes into nutrients essential to the animal. Without this dense microbial community, consisting of bacteria, protozoa, and fungi, cattle and other ruminants could not digest grass. Therefore, the relationship between the rumen microbiome and the host animal is one of the most exciting symbioses in nature. In recent years, the Roehe lab at SRUC (Scotland’s Rural College) in collaboration with the Watson lab at The Roslin Institute of the University of Edinburgh as well as the world’s leading breeding company Genus, has researched how to modify the rumen microbiome to reduce the greenhouse gas methane. This methane is an unnecessary by-product produced by methanogenic archaea during ruminal fermentation that is released through the animal’s mouth and nose into the atmosphere. Once tools to identify the best microbiome that reduces methane emissions and improves animal health and performance are developed, there are many ways to modulate the composition of the microbiome to the benefit of the animal and the environment. Under farm conditions, one strategy with potentially immediate impact would be based on dietary interventions, such as the use of feed additives, which have been shown to reduce methane emissions. However, feed additives must be safe for the animal and the environment and result in higher production costs. They mostly prevent certain steps of methane metabolism, but do not address the main cause of methane production, which is the availability of excess metabolic hydrogen (H2), most likely due to inefficient microbial fermentation of feed. In any case, dietary interventions are not transmitted from generation to generation. Would it not be great to aim for a microbiome at its BEST “permanently”? Of course, “permanent” is just a figure of speech. The rumen microbiome will still be sensitive to different diets, treatments or environments. What we mean is selecting animals based on their genetics that provides, as much as possible, a physical, nutritional, and physiological environment in the rumen that will favour colonization by certain microbes and the occurrence of certain microbial functions. Using this breeding strategy for mitigation of methane emissions will be permanent, the reduction will be accumulated over generations and can be distributed worldwide using artificial insemination. In addition, economic studies have shown that breeding is a very cost-effective strategy to mitigate methane emissions from cattle. Breeding won`t have an immediate effect on methane mitigation compared to some dietary interventions. However, new breeding techniques have been developed (known as genomic selection) that make the impact of breeding much faster than in the past and have resulted in relatively fast changes in performance traits of cattle over time and its effect can be additive to dietary intervention strategies.

Therefore, we were interested in whether breeding using genomic selection can modulate the rumen microbiome. To answer this, we investigated the extent to which the rumen core microbiome is heritable. Heritable means that some of the observed variation between animals in the abundance of their core microbiota (and also the “abundance” of its functions) is partially linked to the cattle genome. In other words, members of the same family share a similar functional and taxonomic core microbiome, because it is influenced by common genes that are transmitted in a classical Mendelian sense. Of 1,107/225/1,141 rumen microbial genera/metagenome assembled uncultured genomes (RUGs)/genes abundances identified from whole metagenome sequencing in our beef population, 194/14/337 were heritable, ranging from 13 to 61% of the observed variation between animals explained by cattle genome. This highlights the huge impact of the host animal genome on the rumen microbiome. The “heritable” part of the core microbiome included a large taxonomic and functional diversity. From novel uncultured Methanobrevibacter strains to the most abundant bacterial genera that degrade complex carbohydrates in the rumen (Eubacterium, Prevotella, Butyrivibrio); from microbial genes involved in microbial protein synthesis (argD), reductive acetogenesis (fhs) or methanogenesis (mcrA, cofG) to those involved in intercommunication processes between microbes (TSAT) or ribosomal biosynthesis (RP-L6).

For the sustainability of the beef industry, mitigation of methane emissions is one of the most critical factors. In our study, we aimed to shape the rumen microbiome to minimize the synthesis of this greenhouse gas, although our breeding strategy can be implemented for any trait influenced by the microbiome, e.g., animal health and feed conversion efficiency. To obtain animals with “permanent” reduced synthesis of methane in their rumen, we needed to investigate if any of these “heritable” microbial abundances were strongly genetically associated with methane emissions. Let me rephrase that. What we needed to investigate was, if there was any association between the host genes that control the heritable microbial functions and the host genes that affect methane emissions (which has a heritability of 33%). We analysed this and found that 29/22/115 microbial genera/RUGs/genes were host-genomically correlated (in absolute values between 0.59 and 0.93) with methane emissions. Are these microbes and their functions exclusively involved in methanogenic pathways? Not really. Most of them were involved in pathways which may limit the excess of metabolic hydrogen (H2) substrate by reductive acetogenesis (fhs), divert specific substrates required to produce methanogenic coenzymes (Coenzyme B) to other pathways (2-oxocarboxylic acid metabolism), inhibit methanogenic organisms, maintain a lower optimal pH in the rumen, or promote a shift in fermentation toward volatile fatty acids (bcd, pccB, fucO) and microbial protein yield (argF, argD, ilvA, AROA2). Others were involved in communication between microbial communities and their interactions with the host conditions or genetic information processes in the microbiome. This sounds like a win-win situation. Does this microbiome-driven breeding strategy to reduce methane emissions also lead to more efficient and healthier animals? Well, this still needs to be investigated, as the whole rumen microbial ecosystem and its interactions with the host metabolism are quite complex, but we are in good spirits.

Once we had all this information, the next step was to propose a selection criterion based on these microbial functions and estimate the expected reduction in methane emissions in our beef population (in breeder jargon, “response to selection”), and that`s exactly what we did. Our microbiome-driven breeding strategy resulted in a potential reduction of 17% in average methane emissions per generation, which exceeded the reduction expected when simply selecting animals based on their methane records (“direct selection” if you are a breeder), which was 13%. As discussed earlier, this response is permanent and with successive selection will be increased over generations. Generally, the differences between the selection responses indicate that the microbiome much better reflects the host genetic effects controlling methane emissions when we are extracting the heritable core-microbiome which is highly genetically related to methane emissions. As we know the function of this extracted core microbiome, we were able to understand why these core-microbiome resulted in some cattle producing less methane than others. In conclusion, our new breeding strategy for a rumen microbiome at its BEST aims to make the cow, the farmer and the people who care about our environment happy. 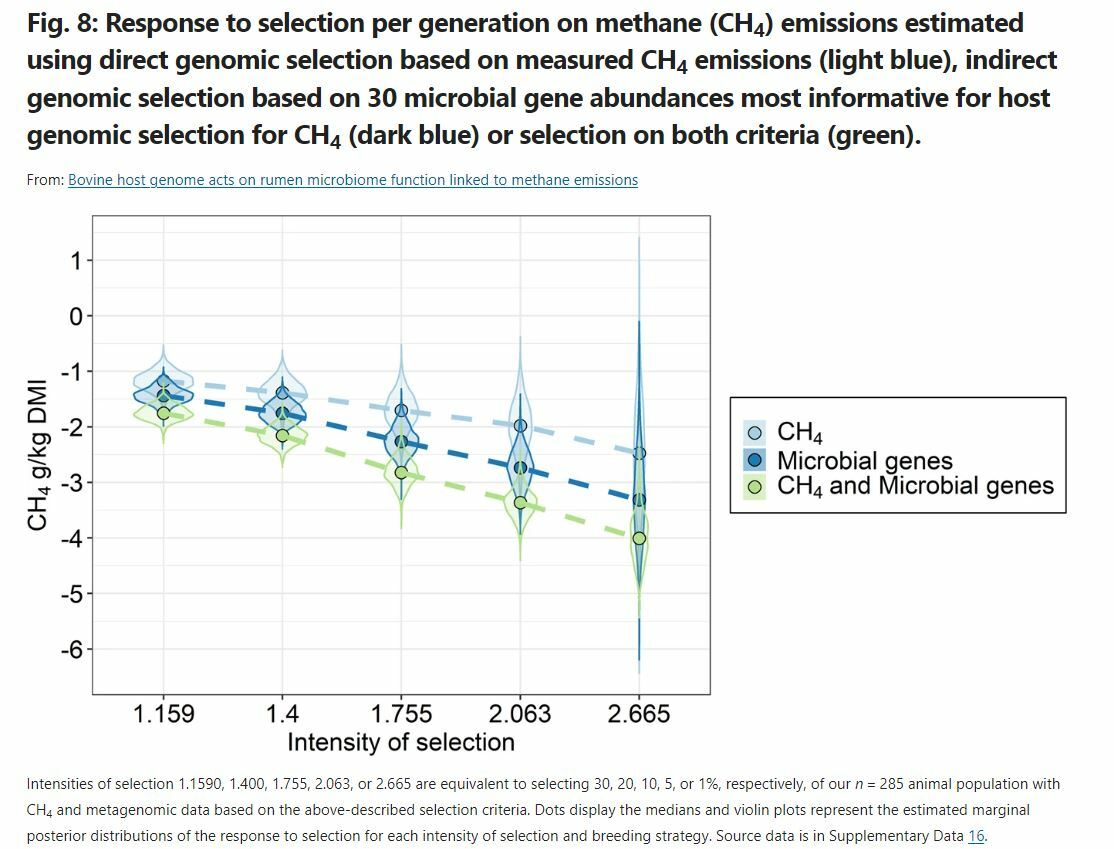