RSV clinical outcome: DVGs or no DVGs, that is the question

The kinetics of defective viral genome accumulation and duration could predict clinical outcome of RSV infection in humans, and thus could be used as a prognostic tool to identify patients at risk of worse clinical disease.
Sébastien A. Felt
Postdoctoral Research Associate, Washington University in St. Louis
Follow
Like

Clinical outcomes of respiratory syncytial virus A infection are associated with kinetics of defective viral genome accumulation in humans.

When I joined the López Lab in June 2017, I only knew vaguely about defective viral genomes (DVGs) from reading about them in virology textbooks. However, Dr. Carolina B. López had been studying them extensively for many years. Her group had established that DVGs of the copy-back type (cbDVGs) play an essential role in determining the infection outcome of non-segmented negative sense RNA viruses in vitro and in mice, mainly by strongly stimulating the host antiviral response that controls virus replication and spread1,2. Most importantly, her team also discovered that cbDVGs were also present in hospitalized children naturally infected with respiratory syncytial virus (RSV) and correlated with higher expression of antiviral genes1. Based on these many years of work and data, it did not take long to convert me into a cbDVG aficionado and convince me that cbDVGs must also play an important role during viral infections in the clinic.

At the time I joined, the group was beginning to investigate the association between detection of cbDVGs and disease severity in respiratory samples from humans naturally infected with RSV. As with many projects, collaboration was key, and we were fortunate to have access to samples from three different RSV positive cohorts. Children are the most affected by RSV. As a consequence, we evaluated first the role of cbDVGs in hospitalized children (Cohort 1). We started by screening all the samples for presence of cbDVGs using our RT-PCR method and confirmed these results using our RNAseq/bioinformatics pipeline. Both our methods take advantage of the unique structure of cbDVGs1,3. We found that hospitalized children that tested positive for cbDVGs had stronger antiviral and pro-inflammatory responses, which is what we expected based on our previous work. However, to our surprise, cbDVGs did not control virus replication (at least at the time point of sampling) but instead cbDVGs associated with higher virus load and worse clinical outcome. As the disease spectrum of RSV is very broad and the results of Cohort 1 were very intriguing to us, we decided to test if the role of cbDVGs differed in non-hospitalized children (Cohort 2). We found that cbDVGs also associated with stronger antiviral and pro-inflammatory responses and higher viral load, however, we did not observe a worse clinical outcome in this non-hospitalized cohort.

What could explain the difference between these two cohorts? This question led to our hypothesis that cbDVG kinetics (when during the course of the infection cbDVGs appeared), and not simply their presence/absence, determine RSV clinical outcome. We speculated that cbDVGs might be present earlier in non-hospitalized children hence they have an earlier antiviral response and better outcome. Two datasets seemed to support this hypothesis. First, we previously had shown that the earlier cbDVG were detected in human lung explants infected ex vivo, the earlier we observed antiviral responses and virus control1. Second, we noticed in this study that cbDVG+ non-hospitalized children showed symptoms and were sampled significantly earlier than hospitalized children. Unfortunately, it was not possible for us to confirm our hypothesis in these two cohorts as we only had one sample (time point) per child and had no information on how many days post infection the sample was taken. Hence, to assess the role of cbDVG kinetics in the clinical outcome of the infection, we evaluated the impact of cbDVGs in an experimentally RSV-infected adult cohort that was followed throughout the course of infection (Cohort 3). We found that detection of cbDVGs early after infection (especially in the first 3 days post infection) associated with low viral loads and mild disease, while detection of cbDVGs late after infection, especially if cbDVGs were present for prolonged periods of time, associated with high viral loads and severe disease. Based on these data, we think that in hospitalized children we are detecting late or prolonged cbDVGs, whereas in non-hospitalized children we are detecting earlier cbDVGs. It is important to mention that we do not think we are detecting very early cbDVGs (Day 1-3 after infection) in non-hospitalized children, as we did not observe a significant decrease in viral load and disease severity as seen in adults. We think that these very early cbDVGs would only be detectable in asymptomatic children (excluded from our cohort based on study design) as virus replication is controlled very quickly. Follow up studies are needed to formally test this hypothesis.

Overall, after more than 6 years of work, the analysis of 3 cohorts and 278 samples, the move of our lab across the country during a pandemic and an amazing collaborative effort of 4 laboratories and 16 scientists, we have established that cbDVGs indeed play an important role during natural RSV infections in humans. Our data show that the impact of cbDVGs on RSV disease severity is complex as it is not only the presence of cbDVGs but also the time course of cbDVG accumulation that influences the association between cbDVGs and RSV clinical outcomes. This means that whether cbDVGs are beneficial for or detrimental to the host depends on the context. Currently, our ability to predict the trajectory of RSV disease is limited. Our data suggest that cbDVG detection could be a predictive tool. In addition, this study reveals a new window of opportunity to modulate RSV pathogenesis by promoting cbDVG generation early during infection. Even though this work feels like the end of a very long journey, it actually is only the beginning of a series of brand-new questions that need to be answered. What host factors regulate cbDVGs? Do different cbDVGs species affect RSV clinical outcome? Can cbDVGs be found in other clinically important viral infections and do they also play a role in clinical outcome? As detection methods and our understanding of DVGs constantly improve these are for sure exciting times to work on DVGs!

*Poster image was  created with BioRender.com. 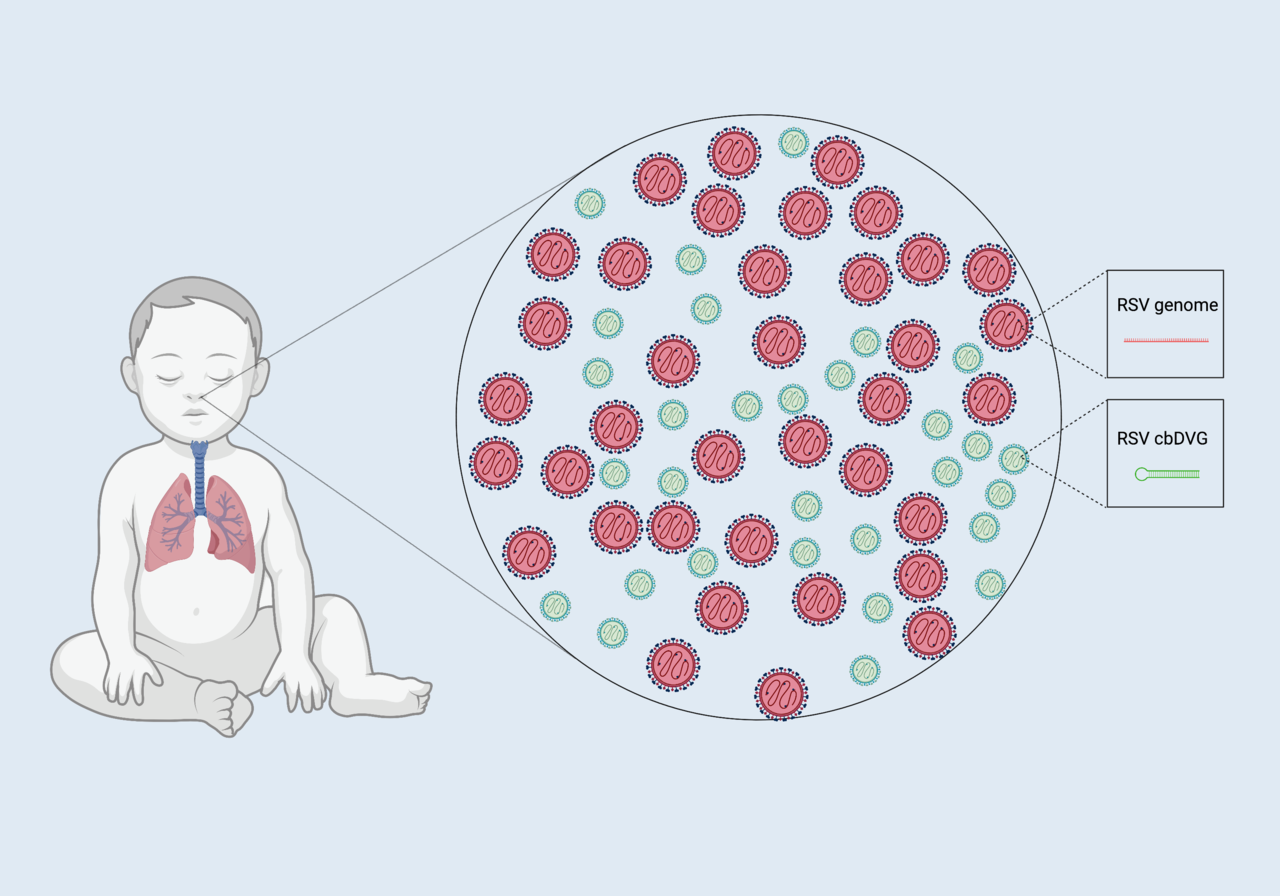 RSV clinical outcome: DVGs or no DVGs, that is the question

The kinetics of defective viral genome accumulation and duration could predict clinical outcome of RSV infection in humans, and thus could be used as a prognostic tool to identify patients at risk of worse clinical disease.