A community from Nature Microbiology
Contributor ISME J
Behind the paper, Under the microscope

Paradigm shift in eukaryotic biocrystallization: purine biocrystals are likely an ancestral type of cellular inclusions in eukaryotes. Cell inclusions in the spotlight of Raman microspectroscopy.
Jana Pilatova
researcher, Charles University
Follow
Like Liked by Evelina Satkevic and 1 other
0

Each of us produces biocrystals – in our bones and teeth. Some can be malignant, such as those causing urolithiases in our kidneys, bile stones, or atheromatous plaques. Different types of crystals are present in reptiles, fish and insects, having brilliant optical properties enabling the beautiful color changes of chameleons and iridescent fish scales; they also form mirror-like layers in the backs of the eyes of nocturnal insects, mollusks and deep-sea fish to improve their vision under low light.

Unicellular microorganisms – protists and algae – represent 70 % of estimated diversity of living organisms on earth and many of them also possess biocrystals that have been observed since the very beginning of microscopy. They have been mentioned even by pioneers of biology – Charles Darwin and Ernst Haeckel, and repeatedly admired by laymen (see Fig. 1, http://y2u.be/HbwV-EzP67Q). But since then still (!), the chemical nature of intracellular crystals has remained unclear, with traditionally repeated myths about calcites or oxalates. According to our systematical revision, this is not the case (https://y2u.be/UtygkzDmz8U).

Figure 1. Birefringent crystalline inclusions polarize light and appear as shining particles inside the micro-eukaryotic cells under polarizing microscopy – admired and captured by both scientists and laymen, despite their as-yet-unknown composition which was revealed to be formed by purines in our recent work; from left to right: microalga (Pediastrum duplex) by Jacek; ciliate (Euplotes sp.) by Waldo Nell, amoeba by pitschuni.

Fortunately, nowadays we have the powerful method of Raman microscopy – enabling measurements of vibrational spectra reflecting the chemical composition in vivo and in situ. Our initial serendipitous discovery of guanine crystals in microalgae led me to a bold guess that it might not be limited to algae, as it is not connected to chloroplasts.  Not to mention, algae emerged many times independently, so they are as closely related to each other as, for example, we are to amoebae. Since I tested more than 200 species from model and biotechnologically exploited species, medically important parasites, and environmental samples from a broad variety of habitats – ranging from toxic algal bloom freshwater species to the anaerobes of termite guts and slime molds, I eventually found that my bold guess was correct – purine crystals are universally present in microscopic eukaryotes. So, I proposed a paradigm shift in the concept of eukaryotic biocrystallization, originally assuming the presence of previously found calcite or oxalates in microorganisms. I have also found other minor types of crystalline inclusions: calcium oxalate, strontianite, calcite, baryte, celestite, lipophilic crystals of sterols, fatty acids, and carotenoids.

Moreover, purine crystals may have occurred in the last eukaryotic common ancestor and be the oldest form of biocrystallization. Hence, we outlined an evolutionary scenario for purine crystal formation inside cells due to highly conserved purine transporters. Purines are surprisingly versatile molecules: building blocks of DNA and RNA, sources of chemical energy (ATP, GTP), and messengers in cellular signaling (cAMP, cGMP). Caffeine is another type of purine that is our favorite and luckily more soluble than those forming biocrystals. We found a new function of purines in the cells. They act as high-capacity nitrogen storage that is reusable once cells are deprived of nitrogen sources (https://www.pnas.org/doi/10.1073/pnas.2005460117). A single cell can store up to 150 pg guanine per cell that can cover up to 3 consecutive cell divisions solely supplied from internal sources of nitrogen after inoculation to nitrogen depleted medium. Thus, they may serve a great competitive advantage in the environment with fluctuating supplies of nitrogen. They are key to the understanding of the global nitrogen cycle, which in turn, is tightly interconnected with the carbon cycle and global climate change. The extra nitrogen load might be further used in green biofertilizers, which are increasing in popularity. However, purine crystals in algal-based food supplements may potentially cause hyperuricemia and its complications, such as gouty arthritis or nephropathy, if consumed regularly.

Simultaneously, purine crystals exhibit exquisite optical properties enabling cells to modulate light – that might be mostly prominent in photosynthetic algae – either increasing light intensity in respect to plastids, or shielding them from excessive light irradiation that may be deleterious to photosystems (https://www.sciencedirect.com/science/article/abs/pii/S1047847719300759). The high reflectivity of crystalline purine inclusions (e.g., photonic mirrors) may be exploited in the field of optics and cosmetic beauty products due to the magnetic tunable reflectivity of guanine biocrystals.

Final statistics: so far, there have been published a million research articles on microbial eukaryotes, half a million on purine metabolism and tens of thousands dedicated to biomineralization, nitrogen cycle, and microbial biotechnologies according to PubMed. All that without the basic awareness that crystalline purines are the most common crystalline inclusion of microscopic eukaryotes. We dare to believe that our findings have similar inspiring potential as the discovery of the biological role of inorganic polyphosphates by the Nobel Prize winner Arthur Kornberg eighty years ago, who initiated extensive research of that mysterious substance, considered to be just a molecular fossil, and thus contributed to the discovery of a multitude of their biological functions. 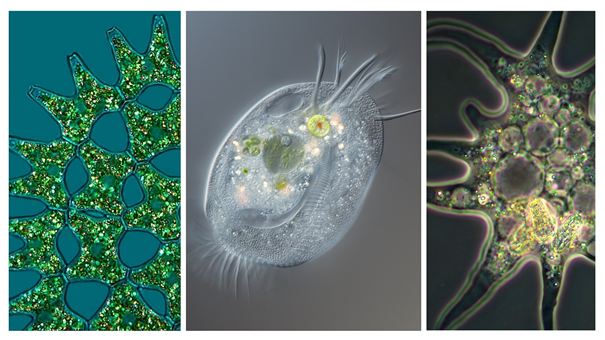