Researchers from NIAID and Shanghai Jiao Tong University School of Medicine found a significant association of Streptococcus salivarius with allergic rhinitis. They showed that this respiratory tract commensal contributes to the exacerbation of allergic rhinitis in mouse models.
Michael Otto
Senior Investigator, NIAID/NIH
Follow
Like Liked by Salvatore Mandalà and 2 others
0

Altered nasal microbiome and increased abundance of the commensal bacterium Streptococcus salivarius are characteristic of allergic rhinitis and contribute to its development in vitro and in vivo.

Microbiological research in the last decade has discovered that the bacterial communities that live on epithelial surfaces of the human body – such as in the intestine or on the skin – have a considerable impact on human health. One site of bacterial colonization is the nose; and although there are by far not as many bacteria in the nose as in our gut, bacteria that colonize the nose have received much attention. This is because some of them, such as Staphylococcus aureus, which do not do any harm in the nose, can cause disease when they gain access to the bloodstream for example through nose picking and minor scratches in the skin. Bacteria in the nose thus have been attributed harmful or beneficial roles based predominantly on whether they can cause disease in remote locations or whether they inhibit or promote nasal colonization by such potentially harmful colonizers. In contrast, we do not know much about whether bacterial colonizers of the nose can directly impact diseases of the nose and upper respiratory system.

Nowadays, a common initial approach to test whether members of the colonizing microbiota may be associated with disease manifestations is to analyze the composition of the respective microbiota in healthy and diseased subjects at the respective colonization site. We were specifically interested in allergic rhinitis, or hay fever, a condition that plagues millions of people worldwide. Similar to other researchers before us, we analyzed the nasal microbiome in patients with allergic rhinitis and healthy controls but used a comparatively higher cohort to overcome contradictory results from those generally more limited earlier studies. To that end, Dr. Ping Miao, the first author, gathered samples together with Dr. Yiming Jiang at Shanghai Ren Ji Hospital/Shanghai Jiao Tong University School of Medicine for microbiome analysis (Figure 1).

We were quite surprised to find not only a generally very different microbiome in patients with allergic rhinitis, but that one species stood out: Streptococcus salivarius, a species only very rarely associated with disease and even often promoted for its probiotic potential. As in any case of a finding revealing a very specific disease-associated dysbiosis, we were intrigued by the possibility that S. salivarius may be involved somehow in promoting or exacerbating symptoms of allergic rhinitis. Naturally, such dysbiosis results are only associative. It was entirely possible that S. salivarius was found more frequently in the noses of allergic rhinitis patients simply because it may “cope” better with the drastically different environment with, for example, strongly increased production of nasal mucus, rather than contributing causally to allergic rhinitis symptoms.

Therefore, to gain insight into a potential causal relationship between the presence S. salivarius and the severity of allergic rhinitis, we developed ex-vivo and in-vivo murine models to monitor the impact of S. salivarius on allergic rhinitis-related phenotypes. Much of this initial exploratory work was performed by Dr. Miao at the NIAID, in continuation of the long-standing collaboration of Dr. Min Li’s lab at Ren Ji Hospital and Dr. Otto’s lab at the NIAID. Having established protocols, Dr. Miao then returned to Shanghai to finish experiments.

The results from our laboratory experiments showed in fact that S. salivarius contributes to exacerbation of allergic rhinitis by inducing inflammation to an extent not seen with other bacteria (using S. epidermidis, another dominant nasal colonizer as control). As this was an intriguing and to some extent unexpected result, we wondered what distinguished S. salivarius from other bacteria in its capacity to cause inflammatory phenotypes associated with allergic rhinitis in the nose.

Certainly, this model is hypothetical to some extent and will need further experimental validation. This should include, for example, in-depth characterization of the role of the previously discovered S. salivarius Srp mucin adhesins in this context. We are also interested in further exploring the potentially beneficial role of S. epidermidis. Finally, the genus Subdoligranulum was also strongly associated with allergic rhinitis, but culturing of nasal isolates of this yet virtually unexplored genus has so far failed. 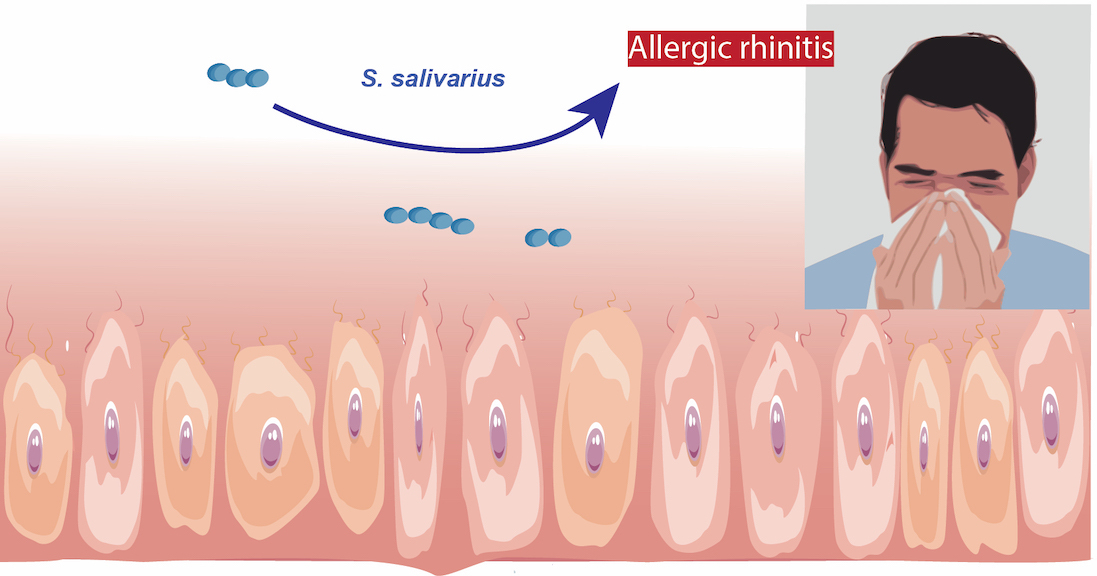 Researchers from NIAID and Shanghai Jiao Tong University School of Medicine found a significant association of Streptococcus salivarius with allergic rhinitis. They showed that this respiratory tract commensal contributes to the exacerbation of allergic rhinitis in mouse models.