Malaria vaccines are urgently needed in the fight against this devastating disease that is responsible for over 600,000 deaths each year.
James Beeson
Deputy Director and Research Fellow, Burnet Institute
Follow
Like Liked by Evelina Satkevic and 1 other
0

Control programs significantly reduced the malaria disease burden in the early 2000s, but progress has plateaued since 2015. An increase in the global malaria burden was recorded in 2020, which may be the start of upward trend in the malaria burden. Malaria vaccines with high protective efficacy are urgently needed to combat malaria to restore and accelerate progress towards malaria elimination

(This article is a summary of the paper "Recent clinical trials inform the future for malaria vaccines". which can be found here: https://www.nature.com/articles/s43856-021-00030-2

Plasmodium falciparum causes the majority of the global malaria burden and has been the primary focus of vaccine development, and Plasmodium vivax is the second major cause of malaria. There are several vaccine strategies that target different developmental stages of the malaria-causing parasite (see figure). This begins with the sporozoite parasite form, which is inoculated into the skin by a feeding mosquito, circulates in the blood, and infects the liver to develop into the morphologically distinct merozoite form, which are released into the circulation. Merozoites then replicate within red blood cells to exponentially increase parasitemia and can cause severe disease pathology. Some merozoites will undergo development into the gametocyte form that can be taken up by the mosquito vector and subsequently be transmitted in a population.

An exciting and major advance was the recommendation by the World Health Organisation of the RTS,S malaria vaccine for implementation in mass vaccine programs for young children in regions with moderate to high malaria transmission. While this is a major milestone, RTS,S has only moderate efficacy that is relatively short lived (~18 months), and therefore requiring booster doses. Vaccines with higher efficacy and longevity are an important future goal.

Table: Summarizes the vaccine dosage, population, and outcomes from recent and ongoing clinical trials of vaccines for P. falciparum. Note that this is not a comprehensive list of all completed or ongoing malaria vaccine trials. Not all vaccine groups and results from each trial are included in the table. NA not available, CHMI controlled human malaria infection. PfSpz is a live attenuated sporozoite vaccine. RTS,S and R21 are sub-unit vaccines based on the circumsporozoite protein of sporozoites. RH5.1 is based on the RH5 protein of merozoites. PAMVAC and PRIMVAC are vaccines for malaria in pregnancy and are based on the VAR2CSA protein, which is expressed on P. falciparum-infected RBCs. Pfs230D1M is a truncated form of the Pfs230 protein expressed by gametocytes. For full details, refer to the referenced publications, which can be found here: https://www.nature.com/articles/s43856-021-00030-2

Vaccines can target sporozoites to prevent or impair infection of the liver, and therefore aim to induce immunity whereby an individual is protected against infection and disease. This includes the RTS,S vaccine, as well as live attenuated sporozoites vaccines, which have shown significant efficacy in trials of experimental human infections and trials conducted in malaria-endemic settings. The R21 vaccine, which is based on the same antigen construct as RTS,S, but expressed and formulated differently, has recently shown high efficacy in the first phase 2 trial in young children in Burkina Faso and evaluation in multi-centre trials is ongoing.

Blood-stage vaccines target the merozoite form or infected red blood cells and aim to control parasitemia and prevent clinical illness. There has been considerably less progress in achieving good efficacy for blood-stage vaccines, with only a handful of candidates evaluated in phase 2 clinical trials, and none having progressed further. The most recent is RH5.1, comprised of full-length RH5 protein, an essential merozoite invasion ligand. In a phase 1/2a clinical trial in malaria-naive volunteers, RH5.1 with AS01 adjuvant was highly immunogenic but after experimental infection it only resulted in a 1-day delay until threshold parasitemia levels for treatment were reached. Evaluation in clinical trials is ongoing.

This is an exciting time for malaria vaccine development, with a number of promising clinical trials recently completed and others currently underway, although there are still considerable challenges that stand in the way of achieving vaccine goals within the next decade with several priority areas for research (Figure).

What’s the verdict on complement in COVID-19? 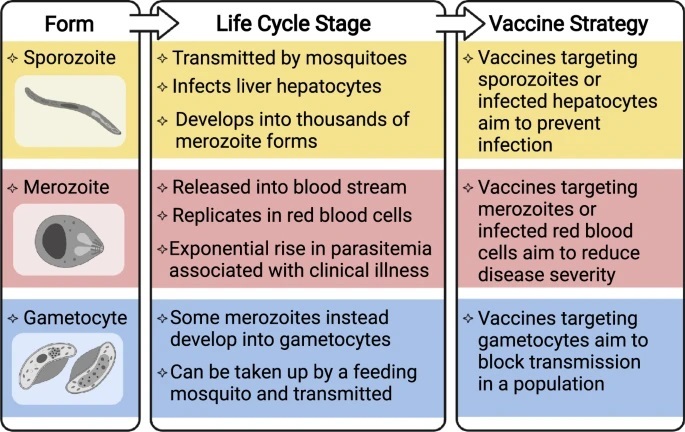 Malaria vaccines are urgently needed in the fight against this devastating disease that is responsible for over 600,000 deaths each year.