Phytoplankton are aquatic counterparts of plants, contributing 50% of CO2 drawdown and O2 production. They also are the base of the marine food chain. Like plants, their photosynthesis and growth rely on nutrients such as phosphate. How phytoplankton regulate P nutrition is poorly understood.

In land plants, phosphorus nutrient uptake is regulated by the SPX-PHR-PSI cascade. SPX is named after the yeast Syg1, Pho81, and the human XPR1 proteins that share homology in their N-terminal 180 residues. In plants and yeast, SPX domain-containing proteins are known to be involved in regulating P homeostasis. From the genome of the diatom model Phaeodactylum tricornutum, we found several SPX-containing proteins, one of which has the SPX domain as the only recognizable functional domain. Using CRISPR/Cas9, we knocked out this SPX gene. A series of physiological measurements and transcriptomic analyses for the mutant and the wild type indicated that SPX in this diatom functions similarly to land plants, i.e., as an upstream negative regulator of phosphate starvation inducible genes (e.g., phosphate transporter, alkaline phosphatase). Further analysis revealed that SPX acted likely through an intermediate protein, PHR (phosphate starvation response protein). The regulatory cascade is as shown in the figure shown below.

Furthermore, using the SPX domain as the query to search through existing databases revealed a wide distribution of this gene in all major phytoplankton lineages and throughout the global ocean.

Therefore, the regulatory machinery like that in land plants occurs and operates in marine phytoplankton. 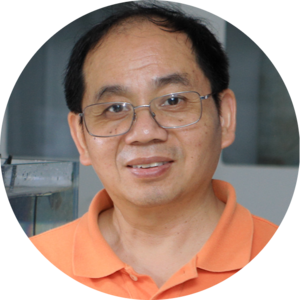