Viruses are everywhere. Also Flavobacteriia, the main degraders of complex algae derived sugars can be infected by viruses. This ends often with the death of the bacterium and consequently influences the marine carbon cycle.

There are not only Coronaviruses on this world, but many different viruses. Those viruses are able to infect very different kinds of organisms. Bacteria are affected by viral infections as well. However, we often recover from a viral infection, but many bacteria die.

Most of the bacteria are living in the ocean and this is the habitat where we looked at viral predation. More specifically we looked at phytoplankton spring blooms off the island Helgoland in the North Sea. The Max Planck Institute for Marine Microbiology and collaborators from the Alfred Wegener Institute took samples every spring over 10 years from the surface water. Huge amounts of water were filtered and various analysis were done. The gained knowledge about the bacterial community and also many thousand isolates enabled the search for bacterial viruses, bacteriophages (short: phages).

So far nobody ever looked at the phages during the spring phytoplankton bloom in the North Sea. Although there are some phage isolates for Gamma- and Alphaproteobacteria (two classes in the Proteobacteria), none was isolated for the main players in the phytoplankton derived sugar degrading bacteria: the Flavobacteriaceae. There are a few marine flavobacterial phages (short: flavophages), but those were mostly isolated in the Baltic Sea.

So, we filtered thousands of liters of water and filled several hundreds of bottles with this “bacteria-free” water. Then we added bacteria, the bait, which were recently isolated pure cultures. We hoped that our phishing for phages was successful after several days of incubation. Over two month of sampling we were able to obtain phages for about half of the bacteria. At this point we were sure, bacteria in the bloom were infected by phages. But this was only a part of the story.

After many plates, over 100 phages were isolated and sequenced. After taxonomic analysis with new tools, developed by researchers at the Institute for Chemistry and Biology of the Marine Environment, Oldenburg, we were able to define 12 new species and ten new genera. But this wasn’t the end. Those genera fall in ten new families from which some had no previous cultured representatives. Two families did not even have metagenome derived relatives. We concluded that not only there are phages present during spring phytoplankton blooms, but they also are very diverse!

It was super exiting to put those phages in a phylogenetic context, but that came with a very difficult task: all these new species, genera and families needed proper names. Because the phages were derived from waters around a Frisian island, a colleague provided us a book with several hundreds of Frisian names, we could pick from. And that’s what we did. With some splendid ideas from the authors, even the family names were doable.

From now on the analysis and talks were even more fun. It is so much better to talk about Freya, Gundel, Peternella, and Molly instead of E25_4_1_1, etc.. With the help of colleagues in from the Biocenter of the University Würzburg those phages not only got a name, but also a morphology. It turned out that these flavophages are very diverse. In addition, we had evidence from read mapping, CRISPR/Cas spacers, and re-isolation, that phages are a stable part of the microbial community in spring phytoplankton blooms.

With this study we took a glimpse in the world of viruses infecting Flavobacteria and even gained some model systems to study this world in more detail. If you are curious about phages or especially flavophages and want to get more information what we discovered, check out our paper about highly diverse flavophages in the North Sea!

Winning the game: a fight for survival in sands 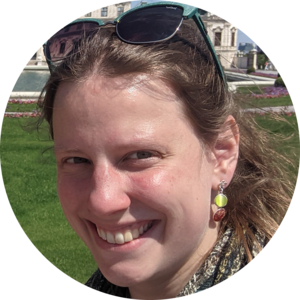