+2
Prasanna Jagannathan and 2 others View all
Assistant Professor of Medicine, Stanford University
Follow

The San Francisco Bay area was an early epicenter of the Covid-19 outbreak. In a coordinated effort with five other San Francisco Bay Area counties, Santa Clara county implemented “shelter-in-place” on March 16, 2020, and Stanford University immediately complied with a shutdown of all non-COVID-related research and in-person educational activities. Simultaneously, research teams at Stanford recognized the immediate need to establish clinical research capacity for COVID-19.  In particular, our team was focused on identifying treatments for outpatients, since successful treatment could prevent hospitalizations, averting the case surges that have overwhelmed health systems in many cities, and potentially reduce transmission by shortening the duration of viral shedding.

While procedures for diagnosis and testing were being scaled, containment concerns precluded institution of in-person COVID-positive patient visits to existing ambulatory care and clinical research sites. The successful roll-out of diagnostic drive-through tents provided a model for reimagining the outpatient clinical trials unit.  Ultimately, we adapted this drive-through approach to outpatient research related to Covid-19 (Figure).  We prioritized a simple, safe, well-ventilated, and reasonably mobile structure with a flexible modular design. We used the drive-through tent model but adapted it for a walk-in clinic. In order to protect the general patient population and the healthcare workforce, we located these structures in tents in a large parking lot, away from clinics and hospitals, and yet within a 3-5 minute drive of the main hospital. This positioning provided ready access to emergency room, investigational pharmacy and a clinical laboratory, and allowed us to leverage hospital supply chains for personal protective equipment, swab sourcing, and sourcing of laboratory supplies.  Proximity to a BSL-2+/3 laboratory for biobanking and other research needs was prioritized. Additionally, we ensured sufficient space for parking, permitting patients to wait in vehicles until their scheduled visit. 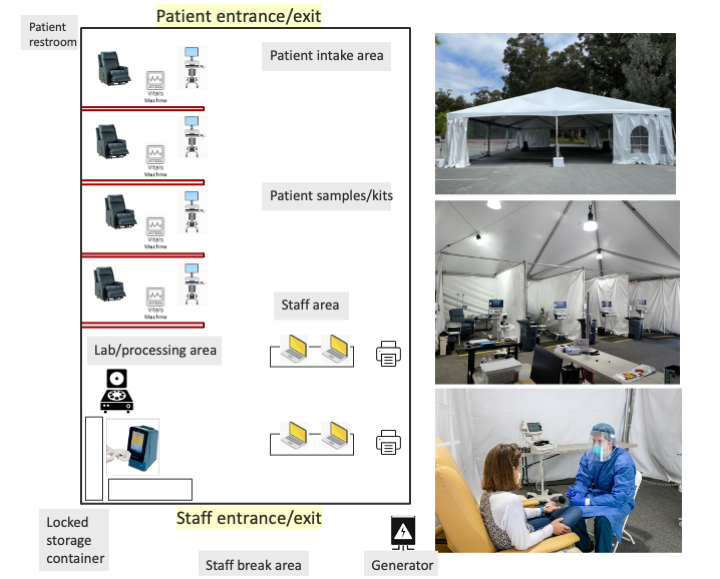 The first trial conducted and completed in the Stanford COVID-CTRU, described in this issue of Nature Communications, evaluated the role of a type III interferon, Peginterferon-Lambda-1a (Lambda), for the treatment of outpatients with uncomplicated COVID-19 (NCT04331899). Type III interferons have been touted as promising agents for COVID-19 given their role in the early response to viral infections and suppression of IFN activity by SARS-CoV2.    In an experimental model of SARS-CoV-2 infection, subcutaneous administration of Lambda prophylactically or early after infection diminished SARS-CoV-2 replication in mice (Dinnon et al, Nature, Aug 2020, PMID 32854108). We tested the hypothesis that a single, 180 mcg subcutaneous injection of Peginterferon Lambda would be associated with a shorter duration of viral shedding in comparison to a normal saline placebo injection.  The first trial participant was recruited on April 25th, 2020, and follow-up completed by August, 2020.

We enrolled 120 adults aged 18-75 years with an FDA-approved RT-PCR assay positive for SARS-CoV-2 within 72 hours from swab to the time of informed consent.  Participants were randomized to receive either a single subcutaneous dose of Lambda or subcutaneous injection of saline placebo, and followed closely for 28 days. The primary outcome was time to cessation of viral shedding in oropharyngeal swabs by RT-PCR. Secondary outcomes included time to alleviation of all symptoms, SARS-CoV-2 viral load over time, viral load area under the curve, and incidence of emergency department visits or hospitalizations.  Of 120 participants, 58% were male, 63% were Latinx, and the median duration of symptoms prior to randomization was 5 days. At enrollment, 49 (40.8%) participants were SARS-CoV-2 IgG seropositive, and this was similar between groups.

We found that Lambda neither shortened the duration of SARS-CoV-2 viral shedding nor improved symptoms compared with placebo. The median time to cessation of viral shedding was 7 days in both the Lambda and placebo arms; there was no significant difference in the duration of viral shedding cessation comparing Lambda vs. placebo (HR 0.81, 95% CI 0.56 to 1.19; p = 0.29).  Furthermore, we observed no significant difference in time to resolution of symptoms (HR 0.94; 95% CI 0.64 to 1.39; p = 0.76), viral load over time or AUC between groups. In exploratory analysis, baseline serostatus modified the effect of treatment on time to shedding cessation (p for interaction = 0.03). However, the effect was opposite to what we expected.  Among seronegative individuals at enrollment, point estimates suggest that Lambda prolonged viral shedding compared with placebo.  Regarding safety, rates of hospitalization were low and not different between groups.  Asymptomatic liver transaminase elevations were more common in the Lambda vs. placebo arm (15/60 vs 5/60; p = 0.027), although these were not sustained.

These results show that a single dose of subcutaneous Lambda was well tolerated but did not shorten the duration of viral shedding or symptoms in a diverse group of outpatients with uncomplicated COVID-19.  Our study was a large, single site study with excellent retention and data quality, and appropriately powered.  The majority of participants in our study were Latinx, reflecting the high burden of COVID-19 among the Latinx community in our surrounding communities.  Our results differ somewhat from those seen in a similar, but smaller, randomized controlled trial of Lambda at the same dose in COVID-19 outpatients in Toronto (Feld et al, Lancet Resp Med, PMID 33556319).  In the Toronto study, Feld and colleagues randomized 60 outpatients to a single subcutaneous injection of 180 ug Lambda (n=30) or placebo (n=30) within 7 days of symptom onset or first swab if asymptomatic. The primary outcome was proportion negative for SARS-CoV-2 RNA by self-collected mid turbinate swabs on day 7 post injection. The median duration of symptoms prior to randomization was 4 days, similar to that seen in our study.  Overall, the authors found that 24/30 (80%) individuals in the Lambda arm, vs 19/30 (63%) in the placebo arm, were negative for SARS-CoV-2 RNA on day 7 (P=0.15). However, after adjusting for baseline viral load, patients in the Lambda group were more likely to be clear of virus by Day 7 after dosing (OR 4.12 95% CI 1.2 16-7, p=0.029). Among individuals with mid-turbinate viral loads of >106 copies/ml at enrollment (19 in the lambda arm vs 16 in placebo), a greater proportion of Lambda participants were negative at day 7 than those in placebo (15/19 (79%) in Lambda vs. 6/16 (38%) in placebo, p=0.01); no significant difference was observed among individuals with viral loads of <106 copies/ml at enrollment.   While these secondary analyses adjusting for baseline viral load were pre-specified, they were not the primary outcome. Given the relatively small sample size among those with higher viral loads (n=35), the corresponding type I error for this particular result is unclear. In contrast to this finding, in our study, Lambda appeared to prolong shedding relative to placebo among those with higher baseline viral RNA levels. Furthermore, Lambda appeared to prolong shedding relative to placebo among those who were seronegative at baseline. Although these subgroup analyses were exploratory and should only be considered hypothesis generating, our findings are not consistent with a possible benefit of Lambda among individuals with higher viral loads (or seronegative individuals early in the course of disease).

Despite the negative finding of our study, we are leveraging trial data and samples to better understand SARS-CoV-2 pathogenesis, including natural history (Jacobson et al, medRxiv 2021.03.05.21253011), Long COVID (Jacobson et al, CID, PMID 33624010), and host immunity. It is of utmost importance that findings of well-designed and well-powered clinical trials of therapeutics be widely disseminated, so that attention can be turned to more promising treatment candidates.  At Stanford, this trial has established workflows for conducting trials of other promising therapeutic candidates, including investigator-initiated (NCT04346628, NCT04524663), industry-sponsored (NCT04425629), and NIH/ACTG-sponsored studies (NCT04518410).