Jorge Doña, Andrew Sweet and Kevin Johnson find that dove lice species with higher dispersal abilities have stronger genomic signatures of introgression. By using sequence data from multiple species of both wing and body lice from the same species of hosts, the authors are able to control for nearly…

Parasites are often viewed as highly dependent organisms (i.e., highly dependent upon their hosts). This common view is true for many aspects (e.g., parasites are usually highly specialized to feed upon their hosts), but it can lead to some misconceptions if taken so literally.  This is especially true for highly specialized and host-specific parasites.  For example, one might think that these parasites never (or very rarely) abandon their hosts —let alone successfully colonize a new species of host (i.e., a host-switch).  However, while host colonization capabilities vary across parasite groups, most of these highly specialized parasites do colonize new hosts (individuals and species), and, most importantly, they do so more often than we previously thought.

Let's take my Ph.D. thesis, on the evolutionary diversification of bird feather mites, as an illustrative example.  When I started my Ph.D., bird feather mites were thought to be highly specialized and host-specific symbionts.  In short, most mite species were supposed to inhabit a single bird species, and they were supposed to be so specialized to their host that they could not colonize new hosts.  To put it in another way, they had all the features characteristic of textbook examples of cospeciation.  Accordingly, one of my thesis's initial goals was to "validate" the cospeciation process of passerine feather mites and birds (their hosts).  Four years later, one of the main conclusions of my thesis was that host-switching was the most important process driving the diversification of this group of mites1, 2 and that mites were able to colonize hosts over much smaller timescales than previously thought3 —even though it is still unclear how they do this.  These findings on the dispersal capabilities of symbionts (and their consequences) are not exclusive to feather mites but are shared with many other groups of host-specific symbionts (e.g., feather lice, which have a lot in common with feather mites).  I finished my Ph.D. with the feeling that while we may agree that symbiont dispersal capabilities have been generally underappreciated —especially in host-specific symbionts, I felt there was so much more to understand regarding the consequences of these surprising dispersal capabilities.

I was transitioning from my Ph.D. stage to a postdoc in Dr. Kevin Johnson's lab (Illinois Natural History Survey, University of Illinois at Urbana-Champaign) when studies finding genomic introgression signatures in species in which hybridization was highly unexpected were popping up in the literature.  Back then, I was thinking about potential postdoctoral project ideas, and the possibility of investigating the importance of hybridization in systems with poorly-understood host-switching dynamics crossed my mind.  Soon after that, in an interchange of ideas of potential projects with Kevin (Dr. Kevin Johnson, Principal Research Scientist, Illinois Natural History Survey), he proposed a way to start exploring the potential role of introgression in this scenario.  Drew (Dr. Andrew Sweet, NSF postdoctoral fellow, Purdue University) had already compiled an excellent population genomic dataset comprised of louse species of two genera that differ in dispersal capabilities.  They had used this dataset to show how dispersal capabilities impact micro and macroevolutionary processes across evolutionary timescales4.   So, even though, at the time, it was a bit unrealistic to think that we were going to find genomic introgression signatures in feather lice (especially for Kevin, who has much more knowledge of feather lice biology than me), Kevin thought it was nevertheless worth giving it a try.

Our hypothesis was simple, lice with higher dispersal capabilities might encounter different louse species more often when reaching a new host, so the opportunity to hybridize may be higher in these lice.

These results are certainly very inspiring for the field of coevolutionary biology because many seminal studies have used feather lice as a study system.  Therefore, the possibility of thinking about the role that hybridization and introgression have played is fascinating.  In fact, we decided to apply for a Marie Curie fellowship because of this study's results, and we were awarded funding to broaden our investigation of this topic.  So, along with Kevin and Juan Gabriel Martínez Suarez (University of Granada), I will be working on louse introgression for the next three years (INTROSYM) —be ready to see more on louse introgression soon! 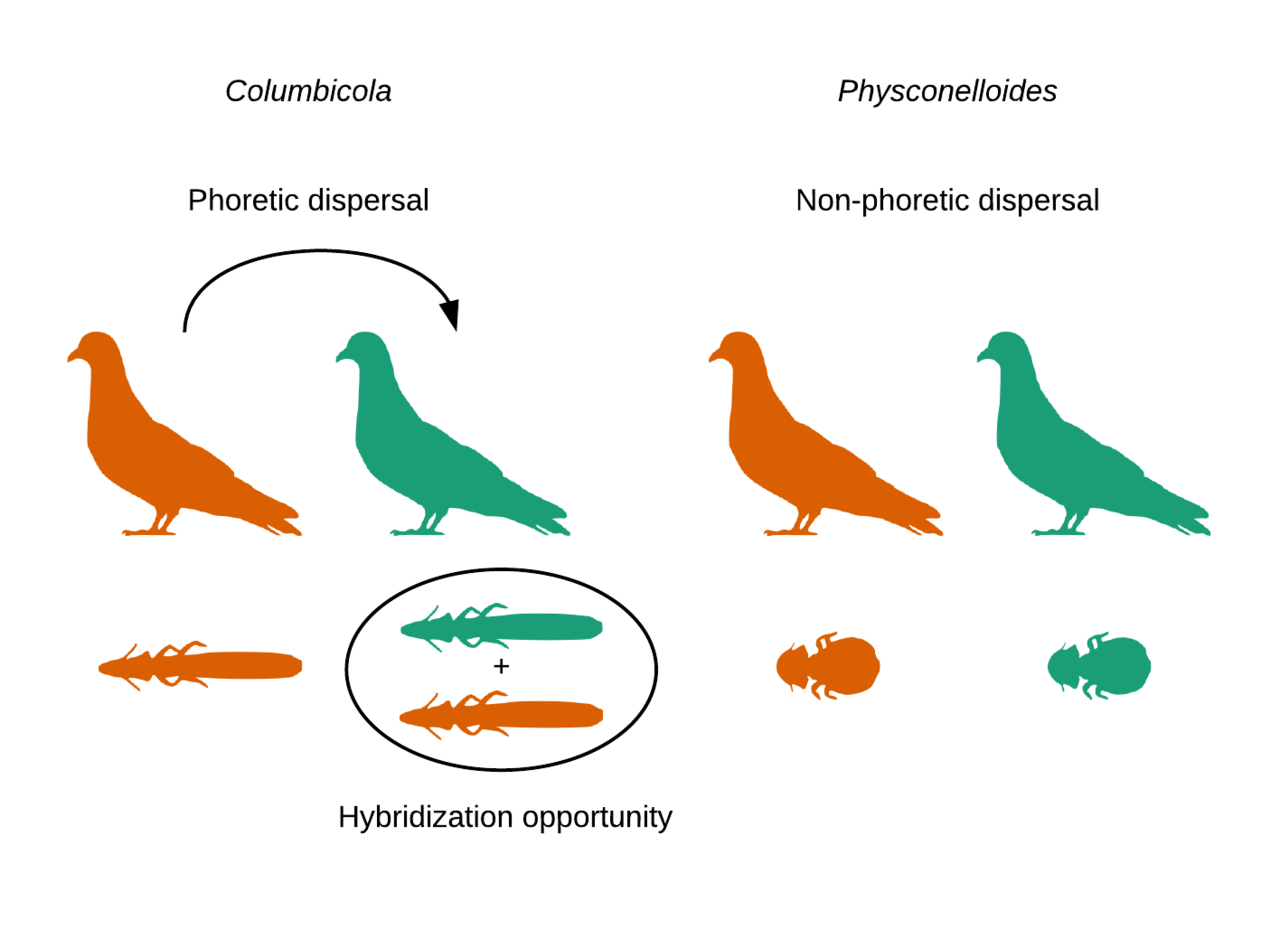