Somewhere back in time there was a switch in the regulation exerted upon the type VI secretion system (T6SS) in Vibrio cholerae. While environmental isolates express the T6 constitutively, more recent pandemic strains only activate it when induced by certain signals. How did that happen? And... why?
Natália Drebes Dörr and Melanie Blokesch
2 contributors
Like Liked by Melanie Blokesch and 5 others
0

The type VI secretion system (T6SS) is a beautiful piece of bacterial engineering, closely related to contractile bacteriophage tails. A complex of proteins anchors the machinery to the double membrane, while an intracellular structure, loaded with toxins, travels through the membrane by a contraction event (= firing). If the T6 pokes another cell during firing, the toxins are delivered and can lead to intoxication and, most likely, death, of competitors or predators. That sounds like a really useful weapon for bacteria to have, right? And indeed, around 25% of all Gram-negative bacteria are capable of producing the T6 and use it for variable purposes.

In our lab, we are very interested in Vibrio cholerae, and one thing has always puzzled us and other people who love V. cholerae and T6: even though all V. cholerae strains can potentially produce the T6, recent strains responsible for the current cholera pandemic (the so-called 7th pandemic El Tor strain clade or 7PET) keep the T6 silent under lab conditions. In fact, their T6 can only be activated when specific signals are present (that is why we call them "inducible strains"; or T6-). On the other hand, in environmental (non-pandemic) isolates of V. cholerae - that live in aquatic environments and are unable to cause cholera - the machinery is found constitutively active (T6+). Why the switch from constitutive to inducible T6 has occurred in V. cholerae, and, more specifically, what caused it, continued to be a head-scratcher for more than 15 years since the T6SS’s discovery. This question also seemed like a pretty cool project for me to work on during my PhD!

After some more "classic" attempts (e.g., transposon mutagenesis screen) to solve this puzzle led nowhere, my boss, Melanie, came up with a laborious, yet very clever idea to construct a library of hybrid mutants by transformation. Our starting point was two V. cholerae strains with different T6 phenotypes: a pandemic (T6-; in red below) and a non-pandemic (T6+; in green below). We theorized that the ability to control T6 activity (from constitutive to inducible state) was genomically encoded and could be transferred from the pandemic to the non-pandemic strain. We, therefore, constructed 40 independent pandemic donor strains, each carrying one aph cassette (encoding Kanamycin resistance) located in the genome. These cassettes were spaced roughly 100kb apart (when different strains are compared!). As the genome of V. cholerae is 4-Mb long, 40 cassettes should cover the entire genome (see below for an extra explanation on this). Next, we extracted DNA from these 40 donor strains and added each one to 40 independent tubes containing the non-pandemic strain growing under natural transformation-inducing conditions. We isolated 20 hybrid clones from each original transformation tube because we knew that roughly 10% of V. cholerae genomic exchanges by transformation could be more than 100kb in length (1). Therefore, by assembling a library of 800 hybrid clones, we expected that all the genetic material (pieces of it) from the pandemic strain could be transferred to the non-pandemic strain at least once or twice (including, hopefully, the T6-regulating part!).

The next step was, of course, to test these 800 hybrid strains to see how their T6 was behaving. We adapted a previously published method (2) to quickly access T6 activity by mixing each hybrid strain ("predator") with a GFP+ E. coli prey. After incubating predator and prey together on a solid surface for a few hours, we checked the GFP signal of the spot with a stereomicroscope. As here we were checking whether the original T6+ strain could have become T6- after a genomic transfer, we were looking for cases in which the E. coli had survived after mixing it with the V. cholerae hybrid strains (so, keep their GFP+ signal!). Ultimately, there was a large number of plates that I checked (like the example below in the picture). My heart was literally racing before checking each of those plates (after all this effort to get to this point). So you can probably imagine my reaction when I saw this one particular plate below, containing the hybrid clones from the original aph insertion #32 (= Kan32). Out of the 20 hybrid clones mixed with GFP+ E. coli, only one clone had remained T6-! It was too good to be true, to be honest, and I became very suspicious of my results. But I tested all clones again using a "standard" E. coli killing experiment in which we enumerate the surviving bacteria quantitatively instead of just looking at the GFP signal, and indeed, it was true! All 19 clones were T6- after having transferred the aph#32 from the pandemic strain; so the T6 regulating part should be close by. We also did the opposite experiment, meaning, transferring aph#32 from the non-pandemic (T6+) to the pandemic strain (T6-). In this case, 7 of out the 20 clones had become T6+!

aph#32 was in fact located roughly 15kb upstream of the large T6 gene cluster on the small chromosome. Thus, we hypothesized that the regulating portion might be located inside the cluster itself. To test this idea, we created an additional aph insertion, called #42, located just upstream of the first gene of the T6 cluster (note here for afficionados: we define paar (VCA0105) as first gene and not vipA). We inserted the cassette in both strains (T6+ or T6-) and transferred it to each other. We then tested again 20 hybrid transformants. In this case, 20 out of 20 hybrid clones became T6- and 19 out of 20 became T6+. Now we were more convinced that the T6 regulating region should be inside the large cluster!

Our next task was to identify which part of the cluster contained this "regulator". For that, we compared sequences of the pandemic and non-pandemic large T6 clusters (which are quite similar, by the way) and pinpointed all SNPs (single nucleotide polymorphisms) that we could find. Then, we checked these SNPs by PCR and Sanger sequencing in some of the hybrid clones, taking into consideration their T6 status. We were lucky to have that one hybrid clone that acquired aph#42 but didn't change the T6 status, as it served as our negative control. After checking many gene polymorphisms without success, we found one lonely SNP in a very long intergenic region (431-bp) between the second and third genes of the cluster. In the pandemic strain, this SNP was a G, while in the non-pandemic strain, it was a T. After sequencing the hybrid clones, our jaws dropped when we realized that all hybrid clones that had changed their T6 status (from - to +) had acquired the T from the non-pandemic strain, but that sole hybrid clone that didn't convert to T6+ had kept the original G. What? One SNP? In an intergenic region? Controlling a whole secretion system? Could that be possible?

We rushed to test whether site-direct mutagenesis would work. Meaning, if we exchanged only the SNP in the original strains, could the T6 status be converted too? We created these strains in different backgrounds so that we could check different T6 phenotypes (E. coli killing but also T6 visualization by microscopy). May I just say that I literally ran out of our microscopy P2 room to Melanie's office, screaming "the exchange worked! the exchange worked!!!!!". What an exciting and wonderful feeling that was. I will never, EVER, forget it!

As it turns out, this is indeed THE SNP that rules them all. We confirmed in silico that all bona fide 7PET clade strains (in available databases) have the G, while all non-pandemic T6+ strains we identifiy in the databases have a T! You can find much more details in our recently published paper in which we also briefly discuss how the story continued and why we think an inducible T6 state was favored in the evolution of the 7PET clade.

PS: this beautiful illustration was made by Dr. Noémie Matthey :) 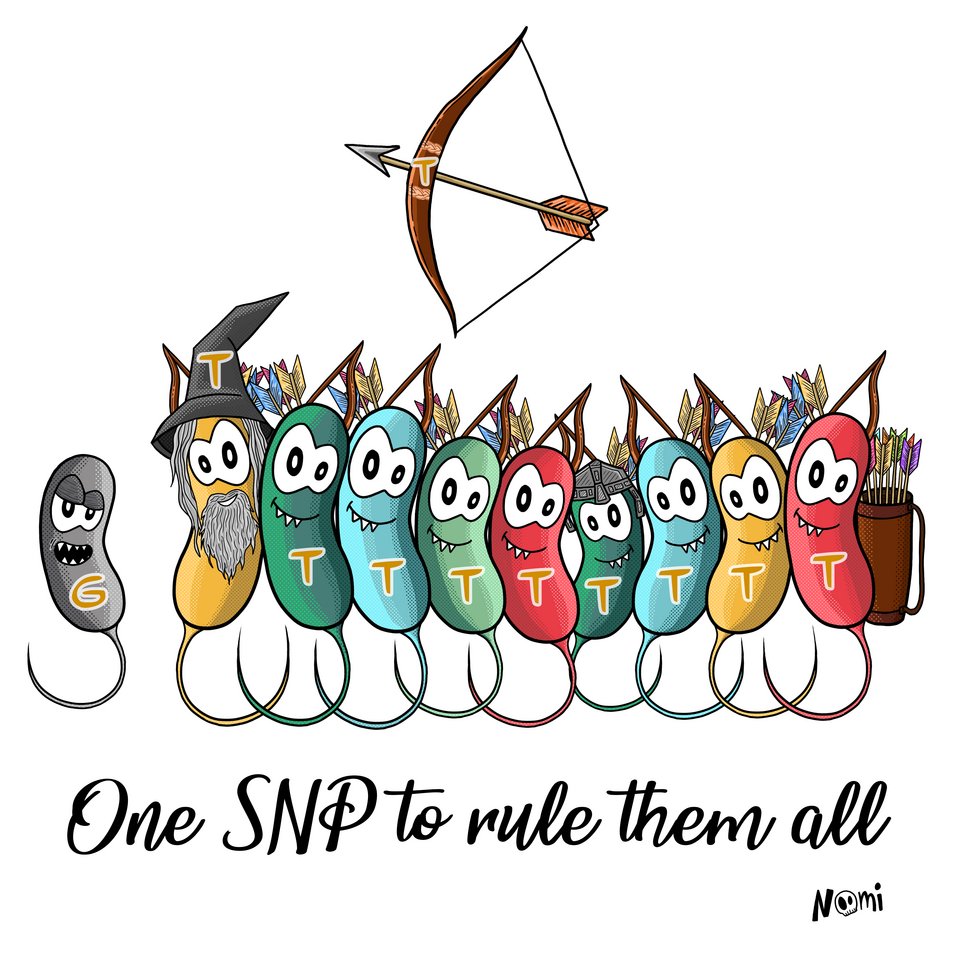 Somewhere back in time there was a switch in the regulation exerted upon the type VI secretion system (T6SS) in Vibrio cholerae. While environmental isolates express the T6 constitutively, more recent pandemic strains only activate it when induced by certain signals. How did that happen? And... why?