The function on subgenomic flaviviral RNA (sfRNA) in the mosquito vector is not well understood. Here, Slonchak et al. show that sfRNA affects virus-induced apoptosis and dissemination of ZIKV in Aedes aegypti mosquitoes, suggesting a role of sfRNA in Zika virus replication and transmission.

The beginning of this project dates back more than 20 years ago when I accidentally run a gel for Northern blot shorter than usual time and saw a small band of ~500 nucleotides on the Northern blot of RNA isolated from West Nile virus-infected cells using a probe to the 3’-untranslated region (UTR). This was unusual as viral RNA is 11,000 nucleotides. One other flavivirus group reported around the same time similar small RNA band and a few years later there was another report with yet a different flavivirus. Neither of us, however, had any idea how this RNA is generated and whether it had any functions in the flavivirus life cycle. It took a number of years until I managed to convince an enthusiastic postdoc in my lab at the time Gorben Pijlman to figure out biogenesis and identify functions of this RNA. He did an excellent job and showed that this RNA which we named subgenomic flavivirus RNA (sfRNA) is generated and accumulated in infected cells as the result of incomplete degradation of viral RNA by the host 5’-3’ exoribonuclease XRN1 (Pijlman et al., Cell Host Microbe 2008). The complex structured RNA elements present at the beginning of 3’UTR stall XRN1 and this results in accumulation of undegraded sfRNA species. We also showed at the same time that sfRNA is essential for viral pathogenicity. This was the beginning of a very exciting and productive period when we and others have identified multiple functions of sfRNA in modulating host antiviral responses and identified ultrastructural bases for XRN1 stalling.

When Zika virus outbreak occurred in 2015-2016 we became interested in defining functions of Zika sfRNA with a particular interest in virus transmission my mosquitoes. To do this another enthusaistic postdoc in my lab Andrii Slonchak first created mutant Zika viruses that don’t produce sfRNA. As Zika generates two sfRNAs, we introduced mutations that prevent production of each or both of them. Previous studies suggested a role for sfRNA in inhibiting RNAi response in insect host, although later studies questioned this. In our experiments, mutant deficient in production of both sfRNAs was not viable even in RNAi-incompetent mosquito cell line. Curiously, mutants deficient in individual sfRNAs replicated at comparable levels to sfRNA-producing wild type virus in either RNAi-competent or RNAi-deficient mosquito cell lines. These results indicate that RNAi-pathway is unlikely to be a biologically relevant target of ZIKV sfRNA.

We then engaged with mosquito esxperts at QIMR Berghofer Medical Research Institute and Queensland Department of Health to test whether sfRNA affects Zika virus transmission by mosquitoes using sfRNA-deficient viruses. We found that mosquitoes infected with sfRNA-deficient viruses had drastically reduced presence of infectious virus in saliva. This indicated that production of sfRNA is needed for transmission of Zika virus by mosquitoes. At first, we expected that sfRNA-deficient mutants would be unable to establish infection in mosquito salivary glands. Surprisingly, immunostaining of the histological sections prepared from infected mosquitoes showed that it wasn’t the case. This led us to conclusion that sfRNA is actually not required for crossing salivary gland barrier and establishing infection in salivary glands, bur was rather required for secretion of viral particles into saliva.

To then determine molecular mechanism behind the function of sfRNA we took an unbiased approach of sequencing RNA from mosquitoes infected with wild type and sfRNA-deficient viruses. When comparing their transcriptomes, it became apparent that production of sfRNA affected expression of multiple genes involved in apoptosis. In particularly, caspase-7 gene was highly up-regulated in mosquitoes infected with sfRNA-deficient virus.

Therefore, we hypothesized that sfRNA protects infected mosquito cells from apoptosis, which is one of the major antiviral response mechanisms in arthropods. We then confirmed antiapoptotic properties of sfRNA by biochemical staining of apoptotic cells in infected mosquitoes and demonstrated that injection of caspase inhibitor into infected mosquitoes rescued replication and transmission of sfRNA-deficient mutants.

In summary, we demonstrated the requirement of sfRNA for Zika virus replication and viral transmission by mosquitoes and for the first time identified antiapoptotic function of sfRNA. 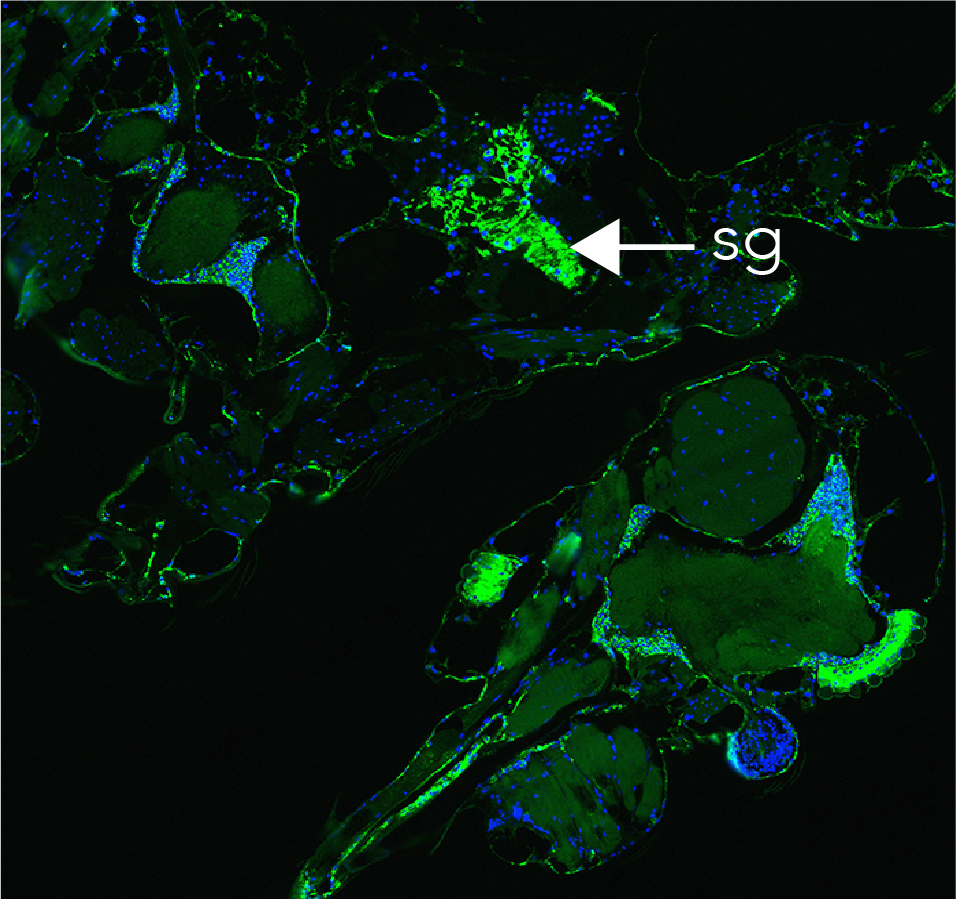