A deacetylase-specific lysozyme is used by predatory bacterium Bdellovibrio bacteriovorus to hydrolyse the prey cell wall in the host exit phase. C. Harding (Lovering group) & S. Huwiler (Sockett group, starting an SNSF Ambizione fellowship at University of Zurich) contributed equally to this blog.
Chris Harding and Simona G. Huwiler
2 contributors
Like Be the first to like this
0

Soil bacteria are responsible for many of our existing antibiotics yet they have further lessons to teach us in the form of unusual biology. The Gram-negative predatory bacterium, Bdellovibrio bacteriovorus, attacks & kills some Gram-negative pathogens, which raises hope as an alternative to antibiotics. This predator has a remarkable lifecycle; it invades, grows and replicates inside the periplasm compartment of the prey, consuming and killing its prey (Fig. 1). A vast arsenal of enzymes, carrying out unique biological roles, are used during this predatory lifecycle. Of particular interest to this study was understanding how the prey cell wall is destroyed, releasing progeny at the end of the predatory lifecycle without doing harm to itself in the process. This fundamental question was addressed by a fruitful collaboration between two Bdellovibrio research groups. The Sockett group, based at University of Nottingham, utilises molecular genetics and microscopy tools and the Lovering group, at University of Birmingham, uses structural biology and biochemical approaches.

Previous work into the predatory lifecycle of Bdellovibrio suggested that a lytic enzyme was required for the final event of breaking down the prey cell wall. Moreover, recent studies revealed Bdellovibrio N-acetylglucosamine (GlcNAc)-deacetylases modify prey peptidoglycan after invasion by removing an acetyl group. Thereby, the predator makes the prey cell wall material chemically distinct from self (Fig. 1) [1]. Therefore, we hypothesised that an ‘exit’-specific enzyme would be expressed immediately prior to prey cell lysis and work solely upon the (GlcNAc-) deacetylated cell wall material of the prey in the exit process.

Our investigations began after we unearthed four cryptic lysozyme homologues encoded in the genome of B. bacteriovorus. Only one of the genes (dslA) was upregulated in the late stages of the predatory life cycle and excitingly a knockout mutant showed a delay in exiting the prey. Henceforth, we focussed our efforts on the lysozyme-like homologue DslA, with the hope it was the ‘exit’ enzyme we were searching for.

We set out to characterise DlsA, which proved troublesome at first. Toxicity and solubility issues during expression were overcome by utilising an MBP tag and the Shuffle expression system. We developed a new biochemical assay, under the expert guidance of the Moynihan group, from the University of Birmingham. This assay used FITC-labelled peptidoglycan substrates, to investigate substrate specificity of DslA. E. coli-sourced peptidoglycan, was modified to a GlcNAc-deacteylated form using the previously-identified B. bacteriovorus GlcNAc-deacetylases [1]. This assay confirmed that DslA was only active upon the GlcNAc-deacetylated substrate, showing no activity towards unmodified peptidoglycan, thereby justifying its name as deacetylase-specific lysozyme (Dsl). After overcoming the initial hurdle, we were pleasantly surprised to find that the protein crystallised in the first well of the first crystallisation plate, easy right? Not quite! Although the thin overlapping plates diffracted well, we were unable to solve the structure by molecular replacement. We had to painstakingly screen hundreds of crystallisation conditions before we hit the jackpot; a single massive crystal that appeared as if by magic. We were never able to reproduce such a crystal, so we had one shot to solve the structure and we made the most out of the sample, shooting it multiple times in different orientations. We decided to experiment with sulphur-SAD due to the high proportion of cysteines in a small protein and it paid off. We were ecstatic when we finally managed to solve the structure, which revealed a divergent lysozyme-like fold and an unusual active-site configuration involving two catalytic glutamate residues. Moreover, a superimposed substrate model (using decades of knowledge garnered on “conventional” lysozyme structures) revealed a mechanism for GlcN specificity: Y228 and M150 project into the GlcNAc binding site thus occupying a position which would clash with the acetyl group (Fig. 1). Back over in Nottingham, the purified DslA protein was added exogenously to E. coli prey cells already infected with B. bacteriovorus. This caused a premature release of B. bacteriovorus, part-way through the predatory lifecycle confirming DslA activity in vivo. Fortunately, we managed to complete all of our experiments in the nick of time. In fact, some time-lapse microscopy experiments were collected right up until the very last day before the COVID-19 lockdown hit the UK.

Our work identifies a deacetylation specific lysozyme involved in the exit process and demonstrates how the periplasmic predatory bacteria manages to break down chemically altered cell-wall material in a new way. In the future we envisage DslA as a useful tool to investigate and potentially damage Gram-positive pathogens that deacetylate their cell wall material to escape conventional lysozyme activity. 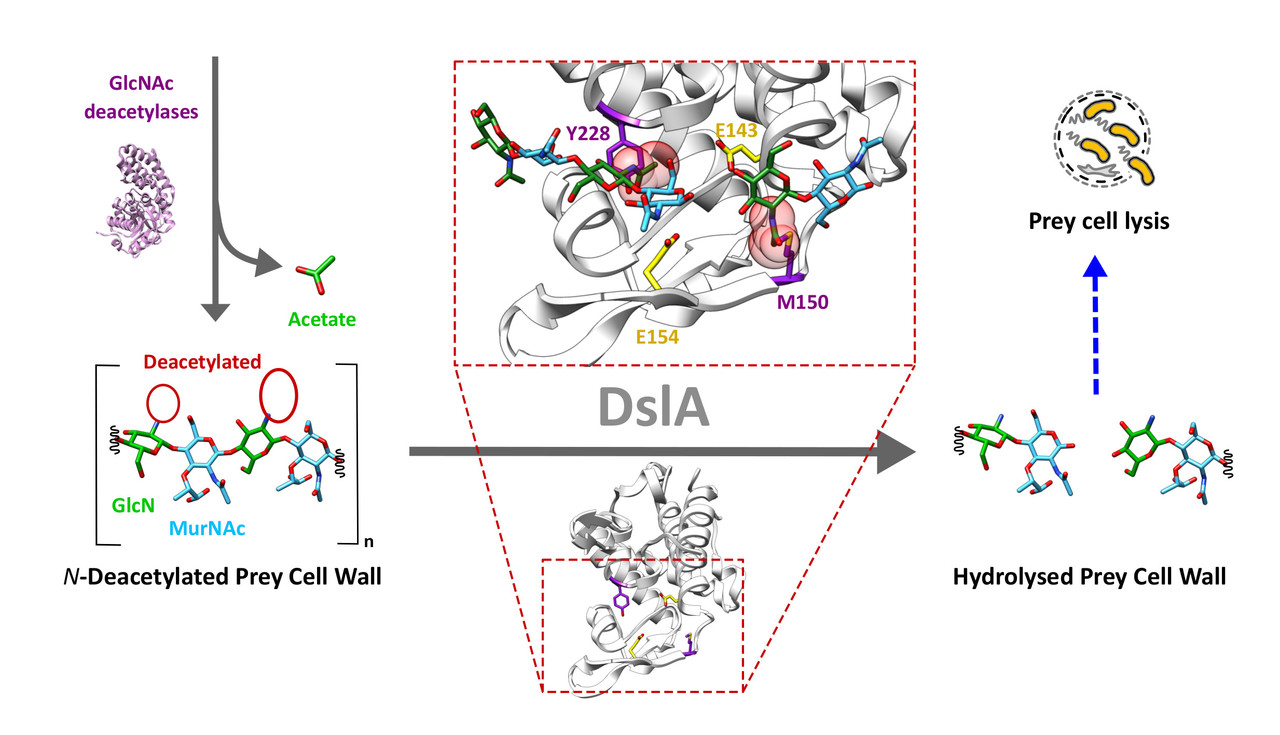