Xia Yu et al. report the characterization of a toxin-antitoxin system with an unusual mechanism in Mycobacterium tuberculosis. They find that the antitoxin locus Rv1044 encodes an atypical serine protein kinase that phosphorylates the toxin to neutralize toxicity.

In a discussion with Dr. Yi-Cheng Sun in 2017, three putative type IV toxin-antitoxin (TA) systems from M. tuberculosis (Mtb) got our attention 1. They share distant homology with the AbiE TA system from the bacterial abortive infection systems2. Structure characterization of this family was lacking. We focused on an Mtb essential TA loci Rv1045-Rv1044 and demonstrated that it constitutes a bona fide TA system. When we solved the crystal structure of the toxin Rv1045 (denoted TglT, stands for unusual type guanylyltransferase-like toxin), it exhibited an overall fold similar to nucleotidyltransferase (NTase) as predicted. How could the structural finding help to understand the mechanism of this TA system?

The breakthrough came from one unusual finding, if not only. Because the wild-type TglT was toxic, we neutralized the toxicity by co-expressing it with the antitoxin Rv1044 and eventually crystallized the nontoxic version of TglT. In model building, we observed an unexplained electron density blob inside the catalytic cavity, whose shape resembles SO4 or PO4 commonly found in crystallization buffers. When modeled a phosphate in the blob, we realized that it stayed too close to residue S78. The only possible explanation was a covalent bond formed between S78 and the phosphate. Given that serine is the target of protein phosphorylation, we made a bold guess: the density was actually a phosphorylated serine. To support our guess, we subjected the protein samples to mass spectrometry and Phos-tag SDS-PAGE, which all confirmed that the nontoxic TglT was phosphorylated at S78.

The next question: how TglT was phosphorylated? We suspected that the antitoxin Rv1044 was responsible because TglT was phosphorylated when co-expressed with Rv1044. We therefore made the second guess, that Rv1044 directly phosphorylates its cognate toxin. To prove this, we designed an in vitro kinase assay. Dr. Xia Yu and Dr. Xiaopan Gao used a clever trick to obtain the non-phosphorylated TglT as the substrate of Rv1044. They co-transformed the plasmid expressing TglT with the empty pMAL-c5x plasmid to minimized the toxicity, yielding a minimal but sufficient quantity for biochemistry. In the kinase assay, we incubated the non-phosphorylated TglT with Rv1044 and [γ-32P] labeled ATP, and observed that the TglT was indeed radioactively labeled, indicating Rv1044 is a protein kinase. Given the sequence of Rv1044 have no homology with known kinases, we denoted it TakA, for unusual type of atypical kinase antitoxin.

Finally, we confirmed that the phosphorylation of TglT leads to toxicity inhibition in a kill-and-rescue experiment . Combining all our findings, we suggested a model for Rv1044-Rv1045 TA system. However, some questions remain to be clarified: (1) What is the function of TglT and what is the cellular targets of the toxin? (2) In most TA systems, to release the inhibition of the toxin, the antitoxin is removed via proteolytic degradation. Obviously, the similar mechanism cannot work for Rv1044-Rv1045 because removing the kinase cannot dephosphorylate TglT, which suggests an Mtb phosphatase must be involved. Intriguingly, Mtb encodes just one serine phosphatase, PstP. Whether PstP phosphatase is able to reverse the TglT phosphorylation and leads to the activation of the toxin remains to be elucidated. 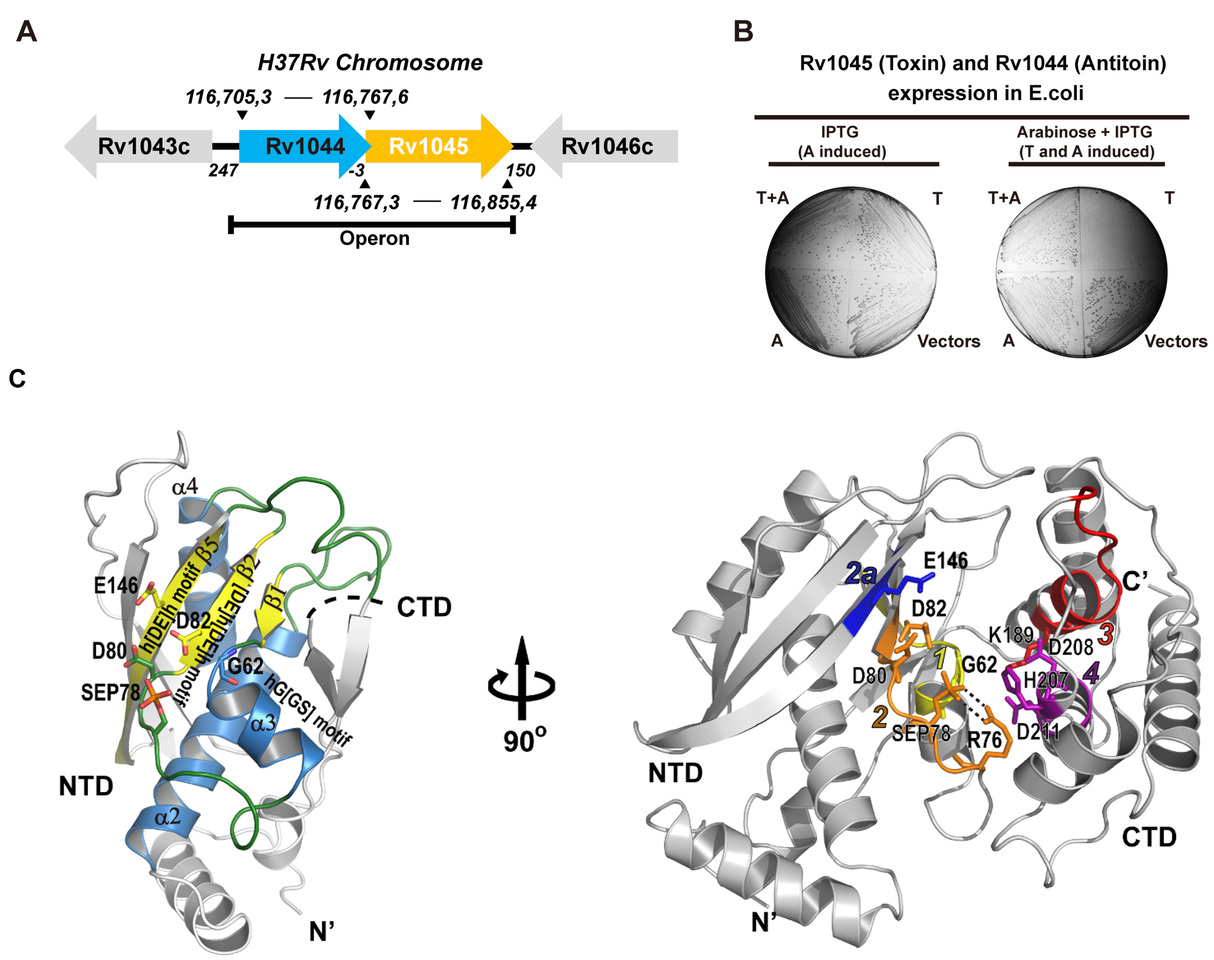