NeMeSys 2.0: a complete collection of mutants in one of the most feared human bacterial pathogens

The bacterium Neisseria meningitidis causes life-threatening meningitis and sepsis. Here, Muir et al. construct a complete collection of defined mutants in protein-coding genes of this organism, which they use to identify its essential genome and to shed light on the functions of multiple genes.

By providing complete lists of genes – the book of life – for most known species, genome sequences have become essential in biology. However, even in the best characterised and simplest species, bacteria, we do not know the meaning (function) of a sizeable proportion of these words (genes). This thwarts holistic understanding of how bacteria grow and replicate, and hinders use of scientific knowledge for practical goals. In order to elucidate the function of millions of genes of unknown function, numerous groups design methods and tools for systematically extracting functional information from their species of interest. The acme of such tools is a complete and ordered collection of mutants consisting of mutants in each non-essential gene, the best known of which is the Keio collection in the Gram-negative model Escherichia coli K-121. Unfortunately, construction of such collections is laborious and expensive, explaining why they are available for only four bacterial species.

Our construction of NeMeSys 2.0 in the bacterium Neisseria meningitidis, which causes life-threatening meningitis and sepsis, followed a relatively straight but very long path. It started 20 years ago with the design of an efficient transposon (Tn) mutagenesis method for N. meningitidis2, which allowed us to assemble an ordered library of ~ 4,500 individual Tn mutants in a serogroup C clinical isolate named 80133. Tn insertion sites were defined by sequencing in each mutant3,4, and mapped on the genome of 8013, revealing insertions in more than 900 genes4. As a "last push", we used the Tn library as a starting point to generate, in two steps, a complete collection of ordered and defined meningococcal mutants. First, we selected a subset of 801 Tn mutants with gene-inactivating Tn insertions, and embarked on a tedious systematic targeted mutagenesis of the remaining 1,174 genes. We could disrupt 783 of these, generating NeMeSys 2.0, which consists of individual mutants in 1,584 non-essential meningococcal genes. We identified 391 essential genes, 92 % of which could be associated with just a few basic functions : gene/protein expression, genome/cell replication, membrane/cell wall biogenesis, and a limited set of metabolic pathways. Finally, we illustrate the power of our new tool by shedding light on the functions of diverse genes, including a set of 20 genes required for the function of a universal filamentous nanomachine, the type IV pilus. NeMeSys 2.0 is thus a valuable resource, which will facilitate the phenotypic profiling of an important of a bacterial pathogen, and eventually lead to a global phenotypic landscape. 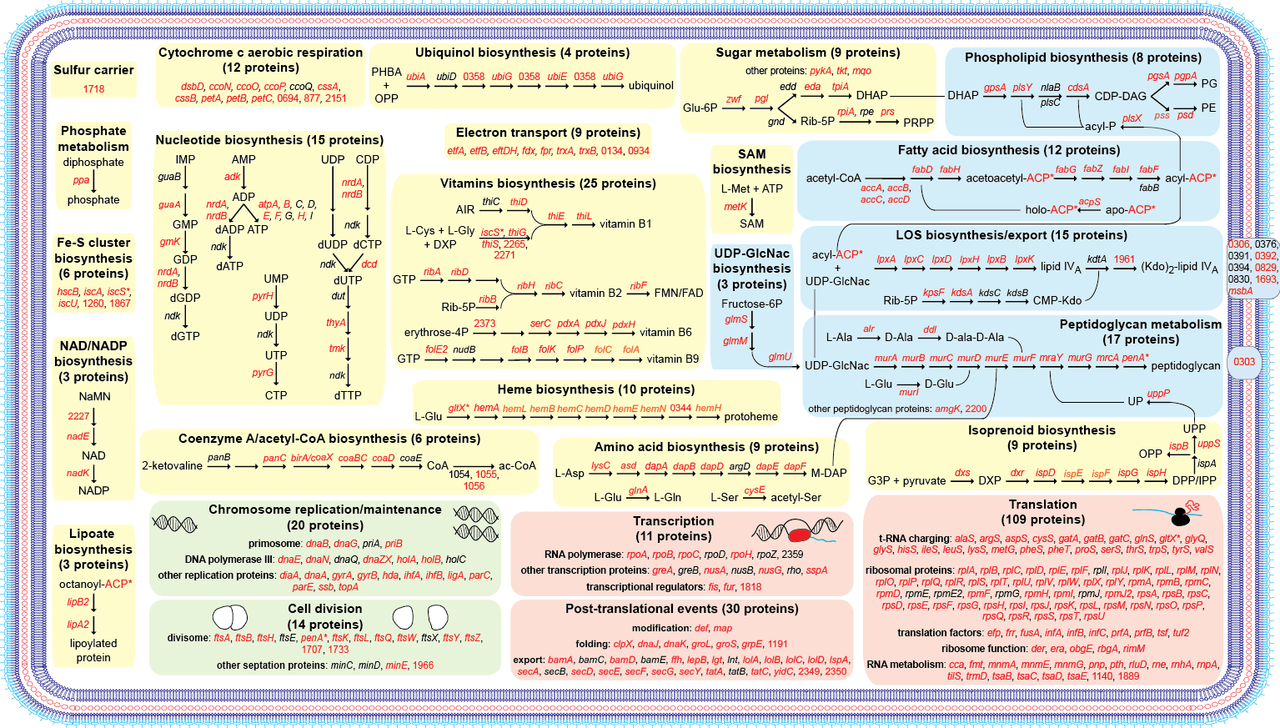 NeMeSys 2.0: a complete collection of mutants in one of the most feared human bacterial pathogens