Mucus on the menu

Humans have an intimate syntrophic relationship with the microbes that live on and in our bodies, the microbiota. Mucus is secreted continuously from the surface of the gastrointestinal tract and some gut microbes have evolved the capacity to degrade the glycans in mucin for use as a nutrient source. In the paper we published recently in Nature Communications, we characterise enzymes from several species that enhance our understanding about the relationship between the microbiota and host significantly.

I agreed to write this blog to highlight the most recent work we have had published from working as a postdoc for Dr Dave Bolam (he doesn’t really like David) and I’ve also used it to mark the end of my time at Newcastle University. I started working at Newcastle for Harry Gilbert seven and a half years ago. My interview took place in January when it was snowing heavily and the cab driver described the weather as “totally tropical” in a strong Geordie accent. Everyone in the lab was very nice and they said yes when I asked if they all go to the pub together. Dave and Harry shared a lab and Fiona Cuskin and Lis Lowe were already postdocs there when I arrived and were in the process of putting together the famous Nature yeast mannan paper. My project would involve characterising a number of different enzyme activities and I was enthusiastic to learn these skills as my previous experience was in transmembrane proteins. This was the place for me.

I started working for Harry on a few projects teamed with Aurore Labourel. She is probably one of the most determined, methodical, and kind people I will ever meet. The lytic polysaccharide monooxygenase (LPMO) work we completed was tough as the enzymes did not express well, the assays took days, and collecting the data was slow. I would not have been able to complete this work without a great partner. I think we both felt that it was a big achievement to get nice stories together for some papers. For the first 2-3 years in Newcastle, I didn’t feel very competent or knowledgeable, but as I started to work on different glycoside hydrolase (GH) families and different projects I had more to share and contribute. By the end of my time with Harry, I had a lot of new skills and knowledge.

I was then offered a postdoc position on a new grant with Dave, ‘Glycoenzymes for Bioindustries’, which is a consortium of a number of academic groups and industrial partners led by Prof Sabine Flitsch. Meeting these enthusiastic and inspirational people every six months to present data and talk about our work provided me with direction and made me feel more a part of the community. I met people from the glycotechnology company Ludger at these meetings and worked together on multiple projects with Paulina Urbanowicz and Daniel Spencer. Their expertise and methods elevated the quality of the data produced during this time significantly. Paulina is like Aurore, my perfect science partner; determined, methodical, and kind. My sister Frankie said the other day, “You’re not really a details person, are you?”, and I really felt seen, I can never spot the typos, sorry Reviewer 3 whoever you are.

My love for host glycans started in the early stages of this postdoc. I started characterising the enzymes from a gut microbe, Bacteroides thetaiotaomicron (which I can now type out without thinking twice), that we thought might have activity against either N-glycans or O-glycans. Together with a PhD student, Justina Briliūtė, we set out to start uncovering how this species was tackling these substrates. I was quickly gifted two very interesting results against complex N-glycans from the science gods. One was an enzyme that removes N-glycans from the glycoprotein and one was a new GH family with a N-glycan-specific activity. Other interesting activities were also found and we assembled a huge amount of data on the process this species operates, as the number of Supplementary Figures indicates, but I will not bore you with the details. The point is that I started to feel like a much better scientist during this and Dave gave me a lot of free rein. I love the feeling of getting an exciting result. At that moment only you know about it, you are about to go get someone else in the lab to stare at it with you, and you feel like you have made a contribution (just before you realise you need to repeat it with the one control you forgot or the standard you didn’t run). I think this is what a lot of scientists I know chase.

We turned our attention to O-glycans once most of the N-glycan work was complete. O-glycans make up the majority of dry weight of mucus, which is the barrier between gut microbes and host epithelial cells. Some gut microbes use O-glycans as a nutrient source and under starvation or low-fibre conditions, for instance, accessing this substrate will support the whole community of microbes in the gut. Long term, we also think that characterising these processes in detail will provide new insights into how this microbial community shares substrates and different disease states. There have been many mucin-active enzymes characterised from gut microbes, but these all access the sugars capping the O-glycan chains, such as fucose, sialic acid, and blood group sugars, and also glycopeptidases that cleave the mucin polypeptide. The types of bacteria that are studied in our lab have a particular MO for degrading polysaccharides or glycans. Briefly, they have an endo-acting enzyme on their surface to break off big chunks of carbohydrate substrate that are then imported into the cell to be degraded further. This MO didn’t match what we knew about the reported mucin-degrading enzymes, so we set out to find the elusive endo O-glycanase. Excitingly, we think we found the missing link in the degradation process with the characterisation of these GH16 enzymes. Their activity bridges the gap between the de-capping mucin-acting enzymes and glycopeptidases, which is summarised in Figure 8 of the paper: 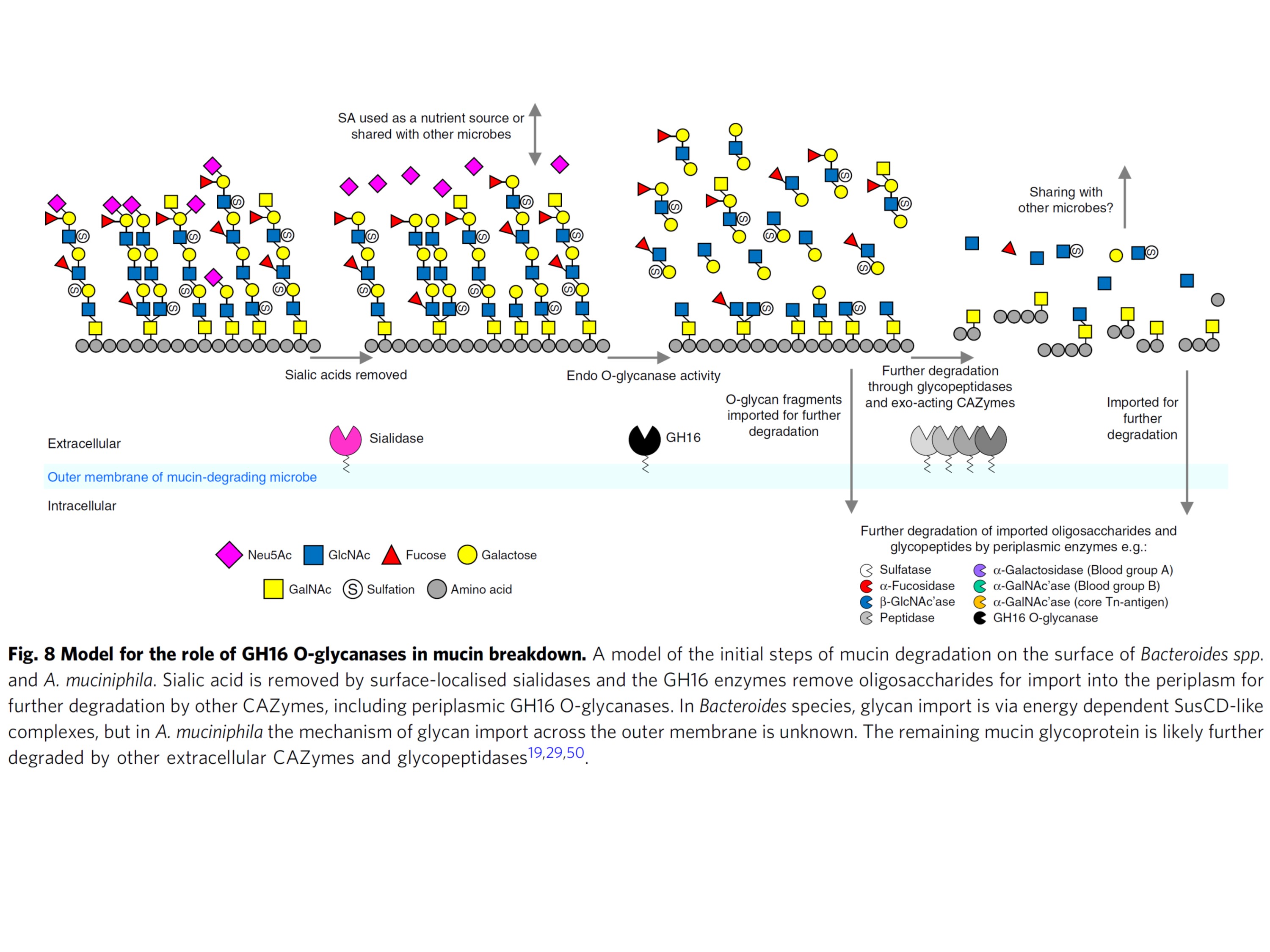 The large number of authors on this publication reflects the many contributions from different specialists: biochemists, structural biologists, medics, and industrial glycotechnology experts. Together we were able to contribute a paper that describes the specificity of enzymes that are likely to be important in mucin breakdown in the gut and pilot studies of how these enzymes could be applied to detect biomarkers in three disease states.

Marcelo Liberato came to Newcastle University to work in our lab just as we were starting to determine the enzyme specificity and made huge contributions to the biochemical and structural characterisation. Arnaud Baslé and Marcelo are talented crystallographers and pushed forward solving the structures of these enzymes to elucidate the underlying specificity.

The medics, nurse, pathologist, and research staff from Newcastle upon Tyne Hospitals NHS Foundation Trust involved in this project are enthusiastic about research with the ultimate goal of making their patients’ lives better. They put a lot of effort into sample collection and processing for the pilot studies. Dr Chris Stewart and Dr Chris Lamb were crucial in facilitating this aspect of the work. The biobanks being assembled will be critical to future studies into a number of different diseases of the gastrointestinal tract. The Wuhrer, Martens, and Linhardt groups also provided valuable input and feedback along the way.

A number of groups at Newcastle University have contributed significantly to understanding carbohydrate degradation by the human microbiota. ‘Glycobiology in Newcastle’ (GiN) comprises several core groups including those of Drs David Bolam, Lis Lowe and Fiona Cuskin, but also involves the labs of Prof Robert Hirt and Prof Bert van den Berg labs. GiN is currently covering a wide range of topics, including studying microbial degradation of bacterial capsular polysaccharides, mycobacterial cell walls and human and plant glycans. I have had an amazing time working with these lovely people.

I’ve started as a lecturer at the Institute of Microbiology and Infection (IMI), University of Birmingham. I will continue to work on both N- and O-glycans and excited to start these projects. We are optimistic that the enzymes we have found will be both useful to the scientific community and used to start finding and detecting more biomarkers for disease.