Mtb biofilms: a sticky affair to fight the war for tubercle bacilli!

“Slow and steady would win the race; without even letting anyone know…also the destruction would be huge” - Sincerely a mycobacterium!!
POUSHALI CHAKRABORTY
PhD student, Institute of Microbial Technology
Follow
Like Be the first to like this
0

Mycobacterium tuberculosis forms biofilms in vitro, but it is unclear whether biofilms are also formed during infection in vivo. Here, Chakraborty et al. demonstrate the formation of biofilms in animal models of infection and in patients with tuberculosis, and that biofilm formation can contribute t…

Tuberculosis (TB) dates back to 3000-2400 BC where traces of Mycobacterium tuberculosis (Mtb) complex DNA were identified in Egyptian mummies, following which, Mtb has never stopped wreaking havoc throughout the world. Till date, TB continues to be one of the most infectious killer diseases, especially in the developing countries. While most people don’t develop active TB symptoms, immunocompromised or malnourished people or those suffering from HIV or diabetes get extremely vulnerable to it. Interestingly, each Mtb strain has its own timeframe for treatment, and thus, TB treatment can take 6 months which may even go upto 2 years in case of MDR and XDR TB. Also, the trauma TB patients encounter, from the side effects of the combinatorial drug therapy is pretty apparent. Even though Mtb has been prevailing since last 139 years with its chronic manifestations, very little attention has been paid to whether it represents a biofilm infection. Thus, with an aim to have a better understanding of the disease pathophysiology and the drug treatment regime, we conceptualized our work.

When I joined this lab in 2015, all I knew about Mtb biofilms was that Mtb bacilli respond to thiol reductive stress by accumulating themselves into a biofilm structure and a major matrix component of such biofilms was cellulose (Trivedi et al., 2016). I was given the task to decipher the role of these Mtb biofilms in vivo. A deep insight into the features of TB made us inquisitive of the fact whether TB is a biofilm infection or not and thus, we indulged ourselves into investigating the same. We started off with mice models of Mtb infection where we used cellulose as a biomarker for Mtb biofilm formation, and established using quite a few biochemical, microscopic and biophysical techniques, that Mtb forms biofilms post infection in mice lungs.

This finding triggered bigger questions in front of us. Since we realized that mice models do not exactly mimic humans, we tried our luck in non-human primate (NHP) models and autopsied human cadavers. Our work, at this point, got highly facilitated by the incredible international and national collaborations with Dr. Deepak Kaushal and Dr. Bishan Dass Radotra who kindly provided us with Mtb infected and non-Mtb infected macaque and human lungs respectively. I acknowledge their help and support, as this step pushed our study quite further. As we anticipated, the findings in NHPs and human samples were in line with those we found in mice, thereby conclusively proving the capability of Mtb to form biofilms in vivo.

Now as per the conventional definition of biofilms, it is a method embraced by bacteria to protect themselves from host immune defense or antibacterials. Keeping this in mind, we next focused on deciphering if the in vivo Mtb biofilms were protective for the bacteria. We infected mice with Mtb and treated them orally with Rifampicin and Isoniazid. A second group of mice received Rifampicin and Isoniazid treatment along with intranasal inhalation of nebulized cellulase. In order to make the mice inhale cellulase, we devised a glass chamber connected to a nebulizer which could aerosolize the protein. Cellulase, being a cellulose-degrading enzyme, degraded the cellulose present in the biofilm matrices in the mice lungs. And as per our assumption, the degradation of cellulose led to a better accessibility of the bacteria towards the anti-tubercular drugs, thereby leading to a better killing, as compared to those treated with Rifampicin and Isoniazid alone.

Getting the correct treatment at a proper time, for the people caught in a crisis, makes all the difference. And the key behind the correct treatment relies on correct diagnosis and perfect modus operandi to tackle the bug. In this case, we apprehended that targeting the biofilm matrix component, thereby dislodging it, would expedite the antibiotic-mediated killing of the pathogen, thereby permanently changing the prolonged treatment regime of TB.

This work definitely is a product of five years of toilsome labor, much confusion, some trauma and loads of exciting data. The road was indeed rough, the journey was indeed tough, but all was well when it culminated in something so fruitful. These findings further open up newer directions in this field. I hope you enjoy reading the manuscript as much as I enjoyed undertaking the journey!! 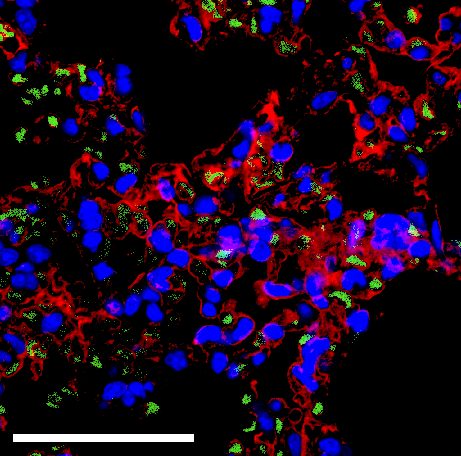 Mtb biofilms: a sticky affair to fight the war for tubercle bacilli!

“Slow and steady would win the race; without even letting anyone know…also the destruction would be huge” - Sincerely a mycobacterium!!