A community from Nature Microbiology
Contributor Comms Earth
Behind the paper

The deep biosphere is the largest microbial ecosystem on Earth, but signs of ancient life in this realm are scarce, so far. In a new study we investigated vein minerals from more than 30 deep mines in the Precambrian basement for signatures of ancient life, and found they are plenty and intriguing.
Henrik Drake
Associate Professor, Linnaeus University
Follow
Like Liked by Raquel Quatrini
0

Cenozoic signatures of life in calcite and pyrite deposits suggest deep biosphere activity throughout the Fennoscandian Shield, as revealed by isotopic, molecular and morphological analyses of mineral specimens.

Research in recent years has revealed that microorganisms inhabit fractured rocks of the continental and oceanic crust to depths of several kilometres, and that they have done so for millions of years. This deep biosphere is probably the largest microbial ecosystem on Earth, but signs of ancient life in this realm have so far been limited to a few sites. In a new study published in Communications Earth & Environment, we investigated vein minerals from more than 30 deep mines in the Swedish Precambrian basement to search for signatures of ancient life, and the signs are indeed plentiful and intriguing.

Igneous rocks make up a majority of Earth’s continents. Their deep, dark and anoxic fracture systems are home to microorganisms that gain energy from consumption of gases, nutrients in fluids and sparsely available organic carbon. Recent research in this realm has started to shed light on how life copes at depth, but studies investigating ancient signatures of life have been relatively scarce so far. Knowledge of the extent of deep life in time and space is therefore still limited.

In this new comprehensive study we analyzed vein mineral samples (Figure 1) from a large number of deep mines and underground facilities (Figure 2) in Sweden and Norway, to hunt down signatures of ancient life in the fracture systems, and to gain knowledge of when the igneous crust was colonized.

We examined mineral samples from more than 30 mines and found solid proof for microbial activity in the majority of them. We looked for, and detected, three types of biosignatures: isotopic, molecular and morphological traces from the three domains of life, namely Archaea, Bacteria and Eukarya.

The results of the study show that fossil signs of ancient life are omnipresent in the igneous fracture systems.

A mine of particular interest was the Kallmora Silvermine in the Bergslagen mining area, Sweden. This mine has been abandoned and water-filled for more than 100 years, and we had to consult museum mineral collections to obtain samples from the deep. When we explored the impressive mineral collections at the Natural History Museum in Stockholm we realized that they actually contain neglected records of a widespread fossil deep biosphere. For Kallmora in particular, the specimens from this mine contained compelling evidence of ancient life, and revealed that both methane producing and sulfate reducing microorganisms had occupied the fracture system in the past.

By using SIMS micro-analyses of stable isotopes of carbon and sulfur in the vein minerals calcite and pyrite, respectively, we could attest that methanogens had been active in the past and that they were succeeded by the sulfate reducers. The positive carbon isotope excursions that suggested ancient methanogenesis were substantial (δ13Ccalcite up to +27‰V-PDB) and this 13C-rich calcite occurred in the calcite crystal interiors, in a couple of overgrowth generations (OGI-OGII in Figure 3). These overgrowths were succeeded by lower δ13C values (OGIII-OGV in Figure 3) that were intergrown with pyrite with substantial S isotope variability.

Coupled with micro-analytical uranium-lead geochronology of the calcite, we could reveal that the methane producers were active about 50–30 million years ago, and the sulfate reducers 19–13 million years ago (Figure 3).

The sulfate reducers that lived in the Kallmora fracture system in the past left behind diagnostic sulfur isotope signatures in the mineral pyrite. In fact, these values are, to the best of our knowledge, the most extreme yet found in the mineral record of our planet. A world record of sulfur isotopes if you will, with δ34S values adding up to  +147‰V-CDT. Whereas microbially-related pyrite usually are isotopically light, which indeed was attested in the samples with values down to as low as -39‰V-CDT, the 34S-rich Kallmora pyrite samples reflect complex reservoir effects along the fracture system flow paths. Such reservoir effects are also shown by bulk δ34S pyrite values exceeding +80‰. We used SIMS ion imaging to disclose the S isotope evolution within single pyrite grains (Figure 4).

Another exceptional finding of the Kallmora mine was that ancient activity of  sulfate reducing bacteria could be distinguished also by remains of specific methyl-branched fatty acids from their cell membranes preserved within the vein calcite. The carbon isotopic signatures of these molecules were lower than those of bituminous organic matter that was one of the anticipated carbon sources for biomass build up in many of the fracture systems. The bituminous carbon source was likely also scavenged by fungi, as shown by spatial relation to fossilized filaments of putative fungal origin.

Our study shows that signatures of ancient life are omnipresent in the igneous crust of the Fennoscandian shield. It is reasonable to believe that the same signatures occur at depth across other continents and our multi-disciplinary approach is an optimal tool to find it out. In a longer perspective, it should also be a suitable tool for surveys of deep ancient life on other planets. Mineral veins are just the perfect graveyards for microorganisms, and represent an untapped archive for signs of ancient life. 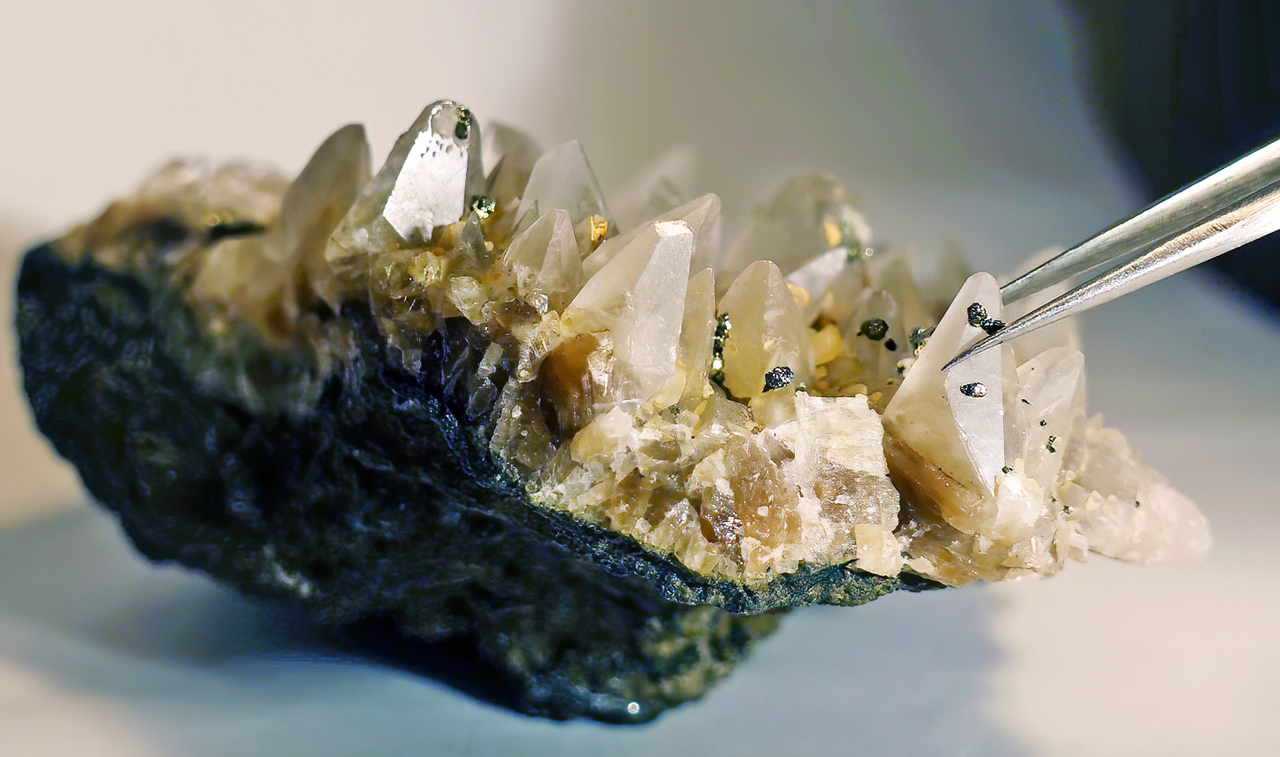 The deep biosphere is the largest microbial ecosystem on Earth, but signs of ancient life in this realm are scarce, so far. In a new study we investigated vein minerals from more than 30 deep mines in the Precambrian basement for signatures of ancient life, and found they are plenty and intriguing.