Mitochondria carry out highly diverse functions and, without a doubt, play a central role in life and death of eukaryotic cells. These impressive organelles are the cellular powerhouses, which produce most of our energy. They regulate calcium homeostasis, facilitate heat production, and contribute to programmed cell death. As mitochondria have been an attractive research target, recent scientific discoveries added another superpower to their repertoire - orchestrating our immunity. We specifically focused on immunity against infections. Not against viruses or bacteria – against fungi!

Often neglected among their microbial companions, fungi cause a variety of infections ranging from superficial ones of the skin and mucosa to life-threatening systemic disease. Candida species are among the most common human fungal pathogens. They are part of healthy microbial communities that colonize our skin, oral, vaginal, or intestinal mucosa. As such, they are tolerated by our immune system. However, these yeasts are opportunistic pathogens and can cause infections (candidiasis) when the opportunity arises, for example when our immune defenses are not working properly. During infections, not only the fungus can cause harm but also our own immune system. A hallmark of vaginal Candida infections - vulvovaginal candidiasis (VVC) - is immunopathology. Neutrophils, one of the most aggressive immune cells, are attracted by infecting Candida cells, but specifically during VVC they often fail to clear the infection and cause severe collateral damage. VVC is the second most common vaginal infection and affects 75% of women at least once during their life. More than 135 million women worldwide struggle with the recurrent form of this infection (≥4 infection episodes per year). This significantly reduces their quality of life and potentially interferes with the reproductive outcomes.

Candida and our epithelial cells are in contact during harmless colonization and infection, so understanding their interaction in detail provides valuable insights into the infection mechanisms. Therefore, we used an in vitro model of vaginal Candida infection. In this model, we mimic the vaginal mucosa using human vaginal epithelial cells and infect these with the four most common Candida species causing VVC: Candida albicans, C. glabrata, C. parapsilosis, and C. tropicalis. Using a variety of different molecular techniques we characterize fungal virulence factors and dissect epithelial responses over time.

Here comes the highlight of our findings - mighty-condria go altruisitic to save their hosts! Very shortly after infection, some mitochondria of epithelial cells seem to sacrifice themselves – they change their shape, lose their integrity, and release their DNA (mitochondrial DNA – mtDNA) into the cytosol of the cell. This mtDNA is normally kept safe inside the mitochondria but once mtDNA is sensed in the cytosol, where it should not be, it serves as an alarm for the cell. In turn, cells initiate a specific immune response. Here was the next surprise. The initiated pathway was a type-I interferon response. This pathway is generally considered as a typical response to viral infections! Along with the results of other studies, it became obvious that this signaling pathway is far more than just “anti-viral”. In fact, it plays an important role in a variety of bacterial infections, autoimmune disorders, and cancer. Our experiments revealed that this response protects against Candida infection and dampens pro-inflammatory responses. It is possible that such an immune response is relevant in host niches colonized by commensal microbes that need to be tolerated without induction of inflammation.

It is important to point out that the mitochondria-mediated response occurred at early stages upon infection with all four tested Candida species. Although belonging to the same genus, these species are like cousins with very distinctive characters. In the sense of infection, they employ diverse pathogenicity strategies, which we confirmed in our model. Consequently, this conserved early response is most likely triggered by something that these cousins have or do in common, which is yet to be uncovered. At later stages of infection, each Candida species used its own species-specific weapons to attack epithelial cells. Therefore, vaginal epithelial cells responded differently because their response was shaped by the amount of damage that was caused.

In conclusion, our paper shows that mitochondria are central players in initiating a protective immunomodulatory type-I interferon response to pathogenic Candida species. Furthermore, these Candida species used different virulence strategies during infection and in turn, epithelial cells responded depending on the level of damage.

The protective role of the type I interferon response may not only contribute to immunotolerance towards Candida colonization of vaginal epithelial tissues, but may also be used for immunotherapeutic applications. 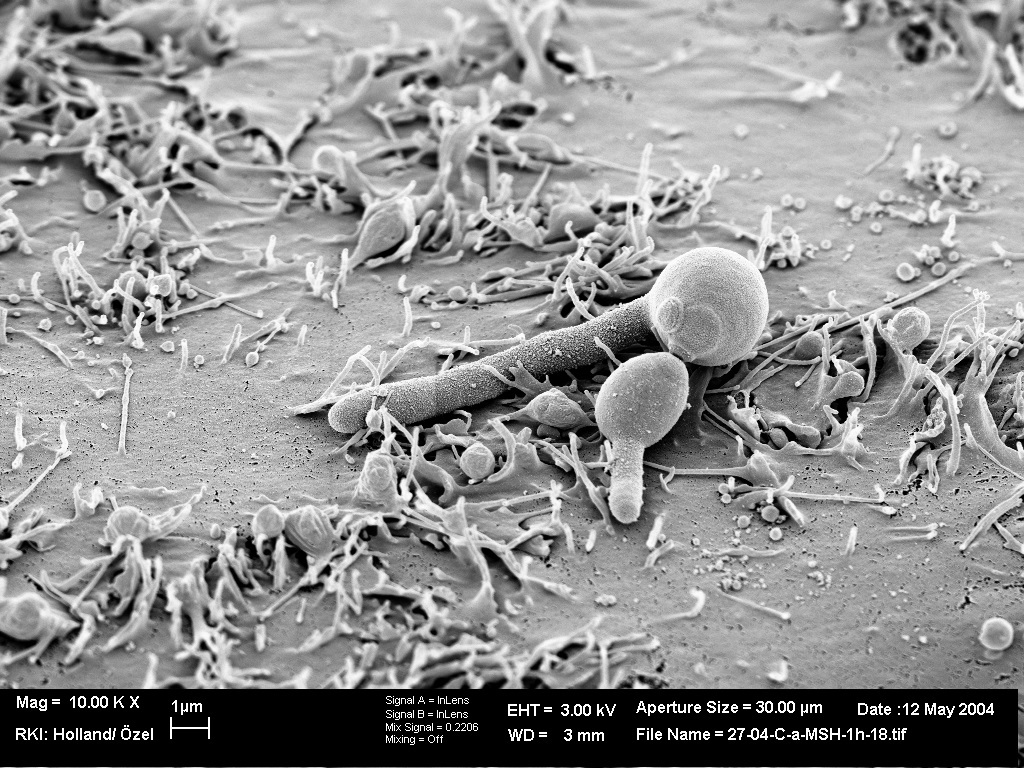