Giallourou, Urbaniak et al. investigated the lipidome and microbiome of breast tissues adjacent to breast tumors and control, healthy breast tissue, by examining both bacterial colonization and lipid metabolism. As a result, the authors propose a relationship between breast oncobiosis and the breast…

Over ten years ago, while Dr. Gregor Reid (the scientist who would later supervise my PhD) was studying various aspects of women’s health, he was curious that those who breast fed had a lower rate of breast cancer. He hypothesized then that the lactation process could deliver beneficial microbes to the infant, while at the same time conferring some anti-cancer effects on the host. He decided to investigate this with his then PhD student Camilla Urbaniak by examining the microbiota of human milk (Urbaniak et al. 2012; 2014) and setting up a collaboration with two surgeons specialized in female breast cancer.

Around the same time, while visiting Dr. Juan Miguel Rodriguez in Spain, he learned that one of his students had shown that ingesting lactobacilli could cure mastitis and result in the bacteria reaching the breast (Arroyo et al. 2010). This made Dr. Reid further hypothesize that bacteria could reach the breast not only through the nipple but also from the gut, potentially via dendritic cells. That raised many questions including how and why different bacteria ‘colonized’ (we use that term loosely as bacterial presence in the breast tissue is sparse) certain women, and what metabolites might they produce to impact a healthy or diseased outcome?

So, with limited resources he and Camilla acquired breast tissue samples from healthy women and those with cancer. By serendipity, Dr. Mark Tangney in Ireland was doing the same thing. The result was both centres discovered that Reid’s hypothesis was correct, and the type of bacteria differed between the groups (Urbaniak et al. 2014; 2016). As best as they could, controls were used to try and rule out contamination at the site or in the sequencing process.

Of course, the finding did not prove cause and effect. Nevertheless, the results were novel and potentially exciting. The first paper was submitted to one ‘high profile’ journal after another then held up an inordinate amount of time eventuating in sceptical reviews. This delayed publication by about a year. A grant application to continue the work also met with rejection from disbelieving reviewers.

There are many lessons for students in this story. Do not be afraid to go down a different path but, realise the ‘system’ will test you severely if you propose something new; and find a way to do the study, even if funds are scarce. The proof will be if others repeat your findings, which is what has happened since (Chan, et al., 2016; Hieken et al., 2016; Banerjee et al., 2018; Wang et al. 2021).

When I came on board, samples had been sent to Dr. Jonathan Swann’s lab in England for metabolomic analyses. The idea was to identify if there was a difference in the types of lipids found in breast tissue of healthy and breast cancer patients. It was logical to believe that this could occur based on the difference in the microbiota of each group and how they utilized nutrients in the tissue. The term lipidomics refers to identifying and measuring the complete set of lipids and their interactions in a biological sample.

Next, we looked at the bacterial profiles of the tissues by sequencing the 16S rRNA gene, which is highly species-specific and exists in the genomes of all bacteria, thus is used for identification. Then, I did an in silico analysis that revealed that ceramides are negatively correlated with the presence of Gammaproteobacteria and Bacillus. Ceramides are lipids with antiproliferative properties, a desirable quality in terms of Cancer prevention. Meanwhile, Acinetobacter, Lactococcus, Corynebacterium, Prevotella and Streptococcus were positively associated with diacylglycerols in healthy tissues, all of which have the genetic potential to synthesize them.

These results further supported the original theory that bacteria are present in the breast, they differ in cancer versus healthy patients and have the potential to produce substances that may initiate or contribute to the cancerous process.

We would be the first to state that further studies are warranted to establish causality, but the findings further open the door to exploration of this linkage. Breast cancer is a major worldwide health issue that affects 1 in 8 women during their lifetime. While genetic linkages have been thoroughly explored along with other environmental factors, the potential role of the microbiome has unfortunately taken a back seat.

At the end of the day, everyone in this field is after the same thing: a way to better understand the disease, prevent and treat it. Time will tell where the microbial component lies in this process, but more pieces of the puzzle are being uncovered to suggest there is a role. If so, the use of methods that will reconstitute a ‘harmful’ breast microbiome could form a novel element in the prevention and management of this disease. 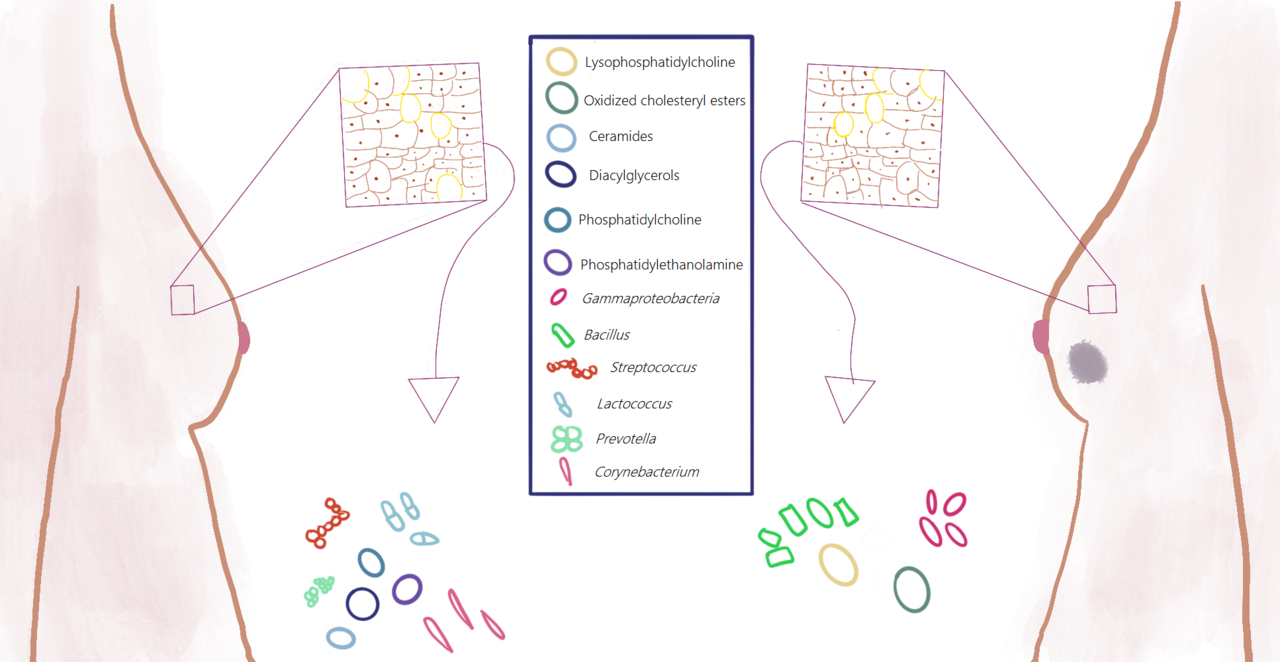