Staphylococcus aureus (S. aureus) encodes a vast array of virulence factors that target host immune defenses (1, 2), and the ability to form a biofilm is another example of how this bacterium is able to circumvent immune-mediated clearance (3, 4). Bacterial biofilms are microbial communities that exhibit metabolic diversity within a matrix composed of extracellular DNA, protein, and polysaccharide (2). S. aureus is a leading cause of prosthetic joint infection (PJI) that is characterized by biofilm formation (5). Eradication of established S. aureus PJI in situ is considered the “Holy Grail” of orthopaedic surgery, as current treatment typically requires surgical intervention (5). This is because antibiotics alone are usually ineffective at clearing infection due to the metabolic dormancy of a sub-population of bacteria within the biofilm, referred to as “persisters” (6). Our laboratory’s approach to this problem over the past 12 years is to understand why the innate immune response is not capable of eradicating S. aureus biofilm, particularly given the fact that innate immunity is the first line of defense against bacterial infection and is usually successful at eliminating pathogens in a healthy immune competent host.

The first clue came in 2014, when our laboratory was the first to discover that S. aureus biofilm preferentially recruits myeloid-derived suppressor cells (MDSCs) (7), which was subsequently confirmed by other groups (8, 9). We found that MDSCs are critical for attenuating monocyte/macrophage pro-inflammatory activity during S. aureus biofilm infection and earlier work from our group characterized the anti-inflammatory properties of biofilm-associated macrophages (7, 10-14). However, although the leukocyte infiltrates and their inflammatory bias during S. aureus PJI are defined, what was lacking is the signals that are responsible for organizing the anti-inflammatory cellular milieu that is typical of biofilm infection.

In 2017, we set out to investigate whether we could identify biofilm-derived factors that were responsible for polarizing the immune response towards an anti-inflammatory state, since our studies had led us to hypothesize that the biofilm was acting as a “maestro” with leukocytes as its obedient orchestra (Figure 1) 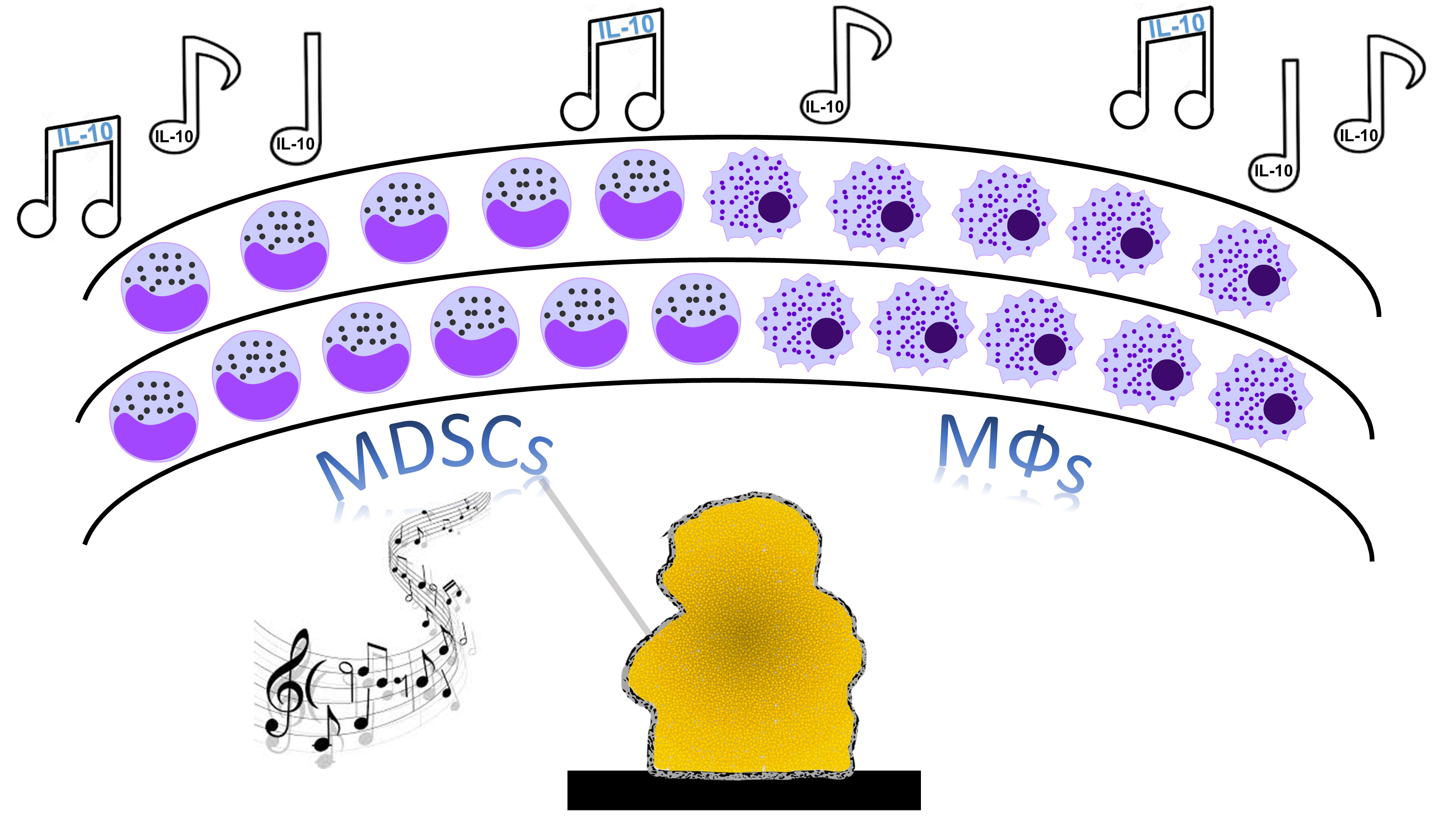 We knew that IL-10 production by MDSCs and monocytes/macrophages was critical for biofilm persistence (11), so we focused our efforts on screening the S. aureus Nebraska Transposon Mutant Library (NTML) (15) for mutants that failed to induce IL-10 in MDSCs. Several hits were identified in pathways responsible for bacterial lactic acid biosynthesis, including D- and L-lactate (16). We generated transposon mutants that were unable to synthesize D- (Δddh) or L-lactate (Δldh1/ldh2) as well as a triple mutant (Δddh/ldh1/ldh2) that was defective in producing both lactate stereoisomers.

Our studies found that both D- and L-lactate production by S. aureus biofilm was critical for inducing maximal IL-10 release from MDSCs and macrophages in vitro and in vivo (16). This was demonstrated by reduced IL-10 levels when MDSCs or macrophages were co-cultured with lactate mutant biofilm, and using pharmacological inhibitors of a major mammalian lactate transporter (MCT1), we demonstrated that biofilm-derived lactate was imported into leukocytes to increase IL-10 production. Using a mouse model of PJI, biofilm burden was significantly lower in Δddh/ldh1/ldh2-infected mice concomitant with decreased IL-10 levels and a transformation of the leukocyte infiltrate as typified by less inhibitory MDSCs and increased anti-bacterial effectors (monocytes and neutrophils). Confirmation that these phenotypes resulted from S. aureus-derived lactate was demonstrated by the fact that co-infection of mice with wild type (WT) and Δddh/ldh1/ldh2 S. aureus reversed the immune phenotypes associated with Δddh/ldh1/ldh2 monoinfection, with a restoration of IL-10 production equal to that elicited by WT bacteria (16).

Next, we aimed to elucidate the mechanism of S. aureus lactate action on IL-10 production by MDSCs and macrophages. We focused on the possibility that biofilm-derived lactate induced epigenetic changes in leukocytes, by linking independent observations that lactate can inhibit histone deacetylases (HDACs) (17, 18) and that the IL-10 promoter is regulated by the antagonistic actions of HDAC11 and HDAC6 (negative vs. positive regulation, respectively) (19, 20). Histones are a class of highly conserved proteins (H3, H4, H2A, H2B, and H1) that regulate gene transcription through post-translational modifications of N-terminal histone tails (21, 22). Histone acetylation is mediated by histone acetyltransferases that transfer an acetyl group to a lysine residue on the histone tail, which relaxes chromatin structure and increases promoter accessibility and gene transcription. Deacetylation is mediated by HDACs, which condense chromatin and favor gene silencing (23). We first demonstrated that leukocytes recovered from WT S. aureus-infected animals in the mouse PJI model had reduced HDAC activity that coincided with increased total H3Ac compared to Δddh/ldh1/ldh2, the first piece of evidence that S. aureus-derived lactate was acting as an HDACi. Chromatin immunoprecipitation sequencing (ChIP-seq) confirmed the increased in H3Ac, including at the Il-10 promoter, as well as the promoters of other genes (16). This indicated that S. aureus-derived lactate induces epigenetic changes extending beyond Il-10.

To investigate the functional importance of HDAC11 vs. HDAC6 in response to S. aureus biofilm, we had to get creative, since no selective pharmacological inhibitors of HDAC11 exist. Therefore, we leveraged HDAC11 knockout (KO) mice for our studies combined with tubastatin A, which is a selective HDAC6i. The premise that we tested was based on earlier reports demonstrating that HDAC6 is a positive regulator of IL-10, whereas HDAC11 physically binds and inhibits HDAC6 action, and hence, IL-10 production (Figure 2) (19, 20). 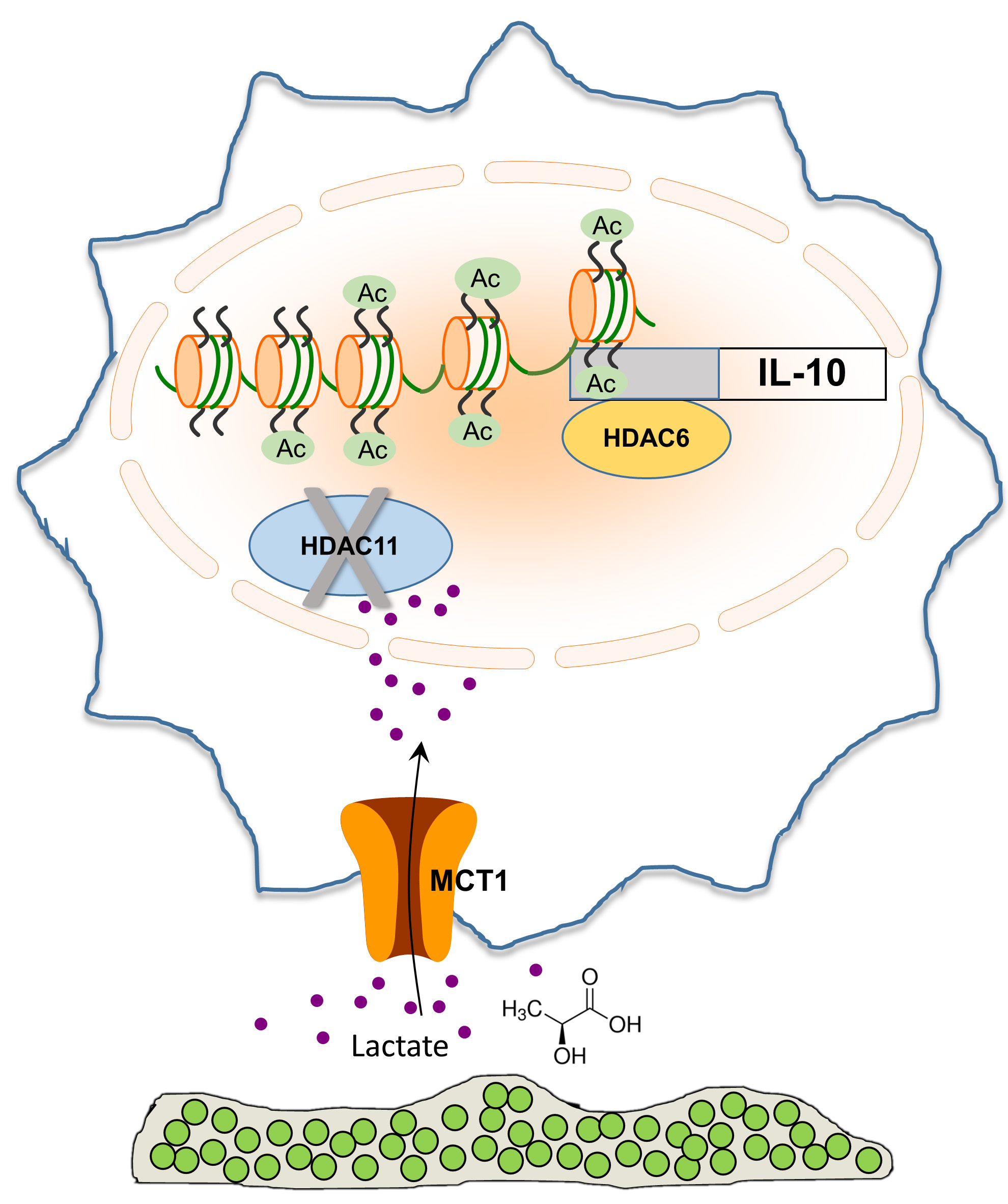 This made our studies technically challenging, since we were trying to determine if S. aureus-derived lactate inhibited a negative regulator of Il-10 transcription (i.e. HDAC11)- a double negative! Infection of WT and HDAC11 KO mice with WT S. aureus showed no significant differences in IL-10 production or bacterial burden. This was expected if S. aureus-derived lactate inhibits HDAC11, making the loss of HDAC11 irrelevant, since nothing is inhibiting HDAC6 and thus, IL-10 is already maximally expressed. In contrast, IL-10 production was significantly higher in HDAC11 KO mice infected with Δddh/ldh1/ldh2 compared to WT animals, likely due to the lack of negative regulation of HDAC11 on HDAC6 activity that drives IL-10 production, which translated into increased bacterial burden in implant-associated tissue. To demonstrate HDAC6 action in vivo, WT mice were treated with the HDAC6i tubastatin A. Bacterial burden and IL-10 production were reduced in animals infected with WT S. aureus following tubastatin A treatment, a phenotype equivalent to when no S. aureus lactate is produced (Δddh/ldh1/ldh2). Moreover, tubastatin A had no effect in Δddh/ldh1/ldh2-infected WT mice, since HDAC6 was already being inhibited by HDAC11 in the absence of S. aureus-derived lactate. Collectively, these findings support the action of bacterial-derived lactate as an HDAC11i that augments IL-10 production during S. aureus biofilm infection, by alleviating the negative feedback on HDAC6 (Figure 2) (16).

Finally, we showed that IL-10 was significantly increased in the synovial fluid of patients with PJI compared to aseptic joints and this coincided with elevated D-lactate levels in the former. Furthermore, human monocyte-derived macrophages exposed to Δddh/ldh1/ldh2 biofilm-conditioned medium produced less IL-10 than in the presence of lactate (i.e. WT biofilm), which was HDAC6-dependent (16). This human data corroborated the mouse model, supporting the translational relevance that biofilm-derived lactate is a critical inducer of IL-10 during PJI and contributes to infection persistence. The finding that IL-10 levels were elevated in the synovial fluid of human PJIs caused by distinct gram-positive pathogens, this highlights the potential broader implications of lactate as a regulator of leukocyte gene expression during infectious caused by diverse bacterial species.

Although host cells can also produce lactate, our studies suggest that bacterial-derived lactate is the major regulator of IL-10 production during biofilm infection. This was supported by two major findings in our work. First, inhibition of host LDH by sodium oxamate had no effect on IL-10 production in the mouse PJI model and second, co-infection of mice with WT and Δddh/ldh1/ldh2 reversed the reduction in IL-10 associated with Δddh/ldh1/ldh2 monoinfection. Although a role for host-derived lactate cannot be definitively ruled out, the main driver of IL-10 production during PJI appears to be bacterial-derived lactate (16). Although our report was focused on IL-10, ChIP-seq revealed that the H3Ac status of numerous genes is affected by S. aureus-derived lactate. Investigating the functional implications of bacterial lactate beyond IL-10 and how this contributes to infection persistence will be interesting topics for future research.

This work was made possible by contributions from our collaborators Drs. Adam Karpf, Dave Klinkebiel, and Ed Seto (epigenomics) and Drs. Vinai Thomas and Sujata Chaudhari (microbiology). It was a pleasure working with scientists who were excited to join the project and were generous with their time and resources. 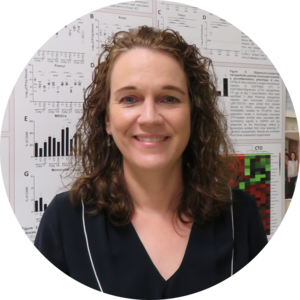