Killing one bird with two stones: a combinatorial approach for fighting drug-resistant fungi

The fungal pathogen Candida auris is resistant to multiple drugs including the common antifungal fluconazole. Here, Iyer et al. identify a compound that potentiates fluconazole activity against C. auris in vitro and in vivo by inhibiting a major efflux pump and thus increasing intracellular fluconaz…

In the world of microbiology and infectious disease, we often hear about how the antibiotic resistance crisis is threatening to undermine the ability of modern medicine to keep infectious agents at bay, making standard hospital visits potentially life-threatening endeavors. The majority of resources in this field have been devoted to tackling pan-resistant bacterial “superbugs”, despite the fact that fungal pathogens of humans, account for an estimated 1.5 million deaths annually (Brown et al. 2012). With only three major classes of drugs available to treat systemic infections, the emergence of drug resistance seriously undermines treatment strategies (Revie et al. 2018). Amongst these drug-resistant fungal pathogens, one stands out as exceptionally concerning: Candida auris. C. auris has galvanized researchers, health professionals, and the media due to its unprecedented transmissibility and drug resistance. This is due to its ability to persist on surfaces for extended periods of time, leading to hospital outbreaks (Lee et al. 2020). Additionally, profiling drug sensitivity of C. auris isolates from across the globe has found that 80% are resistant to the first line antifungal drug fluconazole, and some are resistant to drugs from all major classes of antifungals (Chow et al. 2020). C. auris exemplifies an emerging trend in which the antimicrobial drugs we so heavily rely on, are no longer effective, and if unaddressed, could severely destabilize our health care system.

One way our team in the Cowen lab has aimed to tackle this growing public health issue is by exploring chemical libraries to identify compounds that re-sensitize resistant pathogens to an antifungal such as fluconazole. This combinatorial approach has the chance to extend the life of critical antifungal drugs and decrease the likelihood that resistance may emerge (Healey et al. 2018). Specifically, for this project we partnered with Boston University’s Center for Molecular Discovery to screen their catalog of ~2,500 structurally diverse compounds for those that inhibited growth of drug-resistant C. auris in combination with fluconazole. These efforts identified a bis-benzodioxolylindolinone, which displayed potent synergy with fluconazole.

The next step was to determine how this bis-benzodioxolylindolinone increased fluconazole activity against drug-resistant C. auris. One mechanism by which compound combinations improve each other’s activity is through increasing bioavailability. Thus, we tested the hypothesis that our hit compound was inhibiting efflux pumps, or transmembrane transporters that pump molecules, such as fluconazole, out of the cell. Through genetic and biochemical approaches, we determined that azoffluxin primarily inhibited the major efflux pump Cdr1, which resulted in increased intracellular fluconazole, and therefore greater efficacy. Consistent with this mechanism, we also determined that azoffluxin increased sensitivity of C. auris to an array of intracellular-acting compounds. Based on these findings, we promptly named this compound azoffluxin based on its ability to block “azole” “efflux” out of the cell.

Interestingly, we found that the fluconazole-potentiating effects of azoffluxin were not universal. One of the four major clades of C. auris were recalcitrant to azoffluxin, despite treatment leading to increased intracellular fluconazole. This suggested that the mechanism of fluconazole resistance is an important factor in sensitivity to this compound. One theory is that if a strain has particular mutations in the fluconazole drug target which prevent fluconazole binding, it doesn’t matter how much fluconazole accumulates intracellularly.

While the concept of pairing an existing drug with an efflux inhibitor is not new, these compounds often fail due to off target effects, lack of activity in vivo, or poor pharmacological characteristics (Holmes et al. 2016). In this respect, azoffluxin is promising as it showed no toxicity against human cells, and in a mouse C. auris infection model the combination was able to significantly reduce fungal burden in mice compared to either treatment alone. Surprisingly, we observed a significant reduction in fungal burden in mice treated with azoffluxin alone, despite having no growth inhibitory effects alone in vitro. Assuming these effects are on target, it suggests that inhibition of Cdr1 impairs C. auris virulence. While azoffluxin is certainly not a lead compound for clinical applications, it can be used as a chemical probe to understand the mechanisms of resistance operating in azole-resistant pathogens and to explore the potential of efflux inhibition in a combination therapy to combat fungal disease.

Alan Paul
over 1 year ago

Fantastic work, thank you for expanding on the combinatorial approach. I’ve been following the search for novel alternatives to current and limited classes of AF treatments.  Hopeful for any new breakthroughs in such complexities, especially against the  mutational and adaptability traits. If there is anything I can do to contribute in this fight, it would be my honor. Best regards to you and all teams on the front lines. 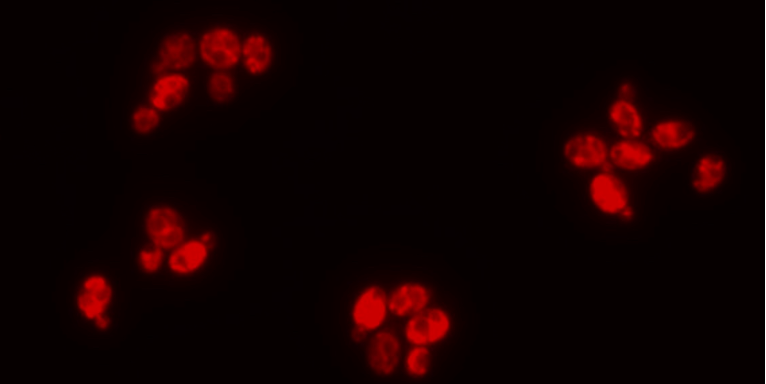 Killing one bird with two stones: a combinatorial approach for fighting drug-resistant fungi