Identification of trypsin-degrading commensals in the large intestine - Nature

Colonization of trypsin-degrading commensal bacteria may contribute to the maintenance of intestinal homeostasis and protection against pathogen infection in humans and mice.

“And the Lord said unto Cain, Where is Abel thy brother? And he said, I know not: Am I my brother's keeper?” – Genesis 4:9

It is our singular good fortune that not all micro-organisms are as cavalier as Cain.  It is hardly news that the microbiota of multicellular organisms in general, and humans in particular, are vital for the well-being of their hosts.  Ever since high-throughput metagenomic methods enabled culture-free analysis of complex microbial ecosystems, many are the conditions of good health and ill that have been variously associated with the presence and absence of particular microbial groups and genera.  However, while it is relatively straightforward to determine ‘who’ is present in a microbial community, it is more challenging to determine ‘what’ each is doing and ‘how.’  In other words, the progression from inferring identity to determining function and eventually mechanism is progressively more difficult.

The digestive protease trypsin produced in the small intestine and involved in the breakdown of proteins would digest the intestinal lining if allowed to persist in the large intestine in which (understandably) protein substrates are relatively sparse.  This is where some members of the microbiota step up to the plate, as it were.  In a series of elegant and systematic experiments, Li et al.1, have dissected of the role of Paraprevotella spp. in maintaining intestinal homeostatsis by enhancing the autolysis of intestinal trypsin.   Needless to say, healthy humans and mice usually have low fecal trypsin levels.

Much as complex biochemical mixtures are iteratively fractionated and tested to identify the ‘active principle’, these researchers fractionated mouse microbiota to determine the specific microbes responsible for an observable effect – in this case, trypsin autolysis.  Working with germ-free (GF) and specific pathogen-free (SPF) mice, not to mention a liberal dose of careful experimentation and creativity in adapting Koch’s postulates for beneficial microbes resulted in a veritable tour de force with intriguing potential at the very least.  Note that GF mice do not harbor any micro-organisms, while SPF mice are free of specific, but not necessarily all, pathogenic organisms.  This ensures that the effects of adding or eliminating specific microbes to the microbiota can be analysed in a step-wise manner.

Initially, the researchers carried out MS-based proteomics of cecal contents of both GF and SPF mice.  Among the molecules more abundant in the large intestine of GF mice (indicative of microbiome dysbiosis) was the anionic isoform of trypsin protease.  This could be rectified by fecal microbiota transplantation from healthy human donors.  Cecal contents of one of the GF mice so “cured” were gavaged into other GF mice that were subjected to different types of antibiotic treatment.  One group treated with ampicillin exhibited even lower intestinal trypsin activity as compared to those without ampicillin treatment, which indicated enrichment for trypsin-degrading organisms.  Microbiome analysis culminated in the preparation of a microbial cocktail consisting of 35 species considered to be adequately representative of all the bacterial strains.  This defined cocktail and its components were tested in groups to evaluate reduction in trypsin activity in an iterative manner, which finally revealed that Paraprevotella clara could reduce intestinal trypsin activity in GF mice.  This completed the “who” part of the analysis.

The next step was to fractionate P. clara bio-molecules to determine the identity of the effector(s).  It was noted that P. clara-mediated trypsin degradation occurs in the presence of Ca2+ ions, signalling autolysis of trypsin.  Fluorescently labelled trypsin also localized to the cell surface, indicating that recruitment of trypsin to the cell surface by P. clara promoted autolysis.  Further analysis employing inhibition of surface glycosylation suggested that a type IX secretion system (T9SS) could be involved in the process of surface recruitment of trypsin.  After identifying putative T9SS components in the P. clara genome, the researchers evaluated the autolysis of trypsin in the presence of a panel of mutants lacking components of the T9SS, which indicated that the product of gene 00502 was the main effector, with the gene product of 00509 as an accessory effector.  This admittedly sketchy summary completed the “what” and “how” part of the analysis.

Rather than call a halt at this stage, the research was further extended by a series of insightful experiments and analyses, making the implications of this study arresting, rather than just the trite “interesting.”  As stated earlier, trypsin autolysis in the intestine promotes host health by protecting the epithelium.  Additionally, lowering the levels of intestinal trypsin enables higher concentrations and longer persistence of host immunoglobulin A (IgA) at the mucosal surface, preventing pathogens from colonization and multiplication.  As a proof of concept, the researchers found that GF mice pre-colonized with the microbial cocktail of 35 strains including P. clara were more resistant to infection and their tissue pathology was less severe when challenged with the mouse hepatitis virus – 2 (MHV) which is, incidentally, a mouse coronavirus.  This protective effect was not seen when the P. clara in the cocktail was replaced by an isogenic strain mutant in the gene 00502.  Finally, the researchers also analysed the fecal microbiome of COVID-19 patients experiencing diarrheal episodes and found that the absence of homologues of 00502 homologues in the microbiome was correlated with an increased severity of diarrheal episodes.  This provides a key mechanistic insight:  Effector molecules of several pathogens (including the spike protein of SARS-CoV-2) often require proteolytic activation by host proteases for full activity and lowering the availability of active host proteases on mucosal surfaces could well be protective.  Therefore it is amply clear, species like P. clara in the intestinal microbiota guard the host from harm in more ways than one by removing proteases from the scene once they have served their purpose in the right place at the right time.

And just by the way, the peer review reports for this paper provide an exemplary window into the peer-review process – in terms of writing, reviewing and responding to reviewers – that could serve as an educational resource for all aspiring (and perhaps even established) researchers.

Disclaimer:  The above post is not intended as medical advice.  No guarantee is expressed or implied regarding the veracity and medical utility of the information provided on external websites and sources.  The opinions expressed herein do not represent the views of the TERI School of Advanced Studies or TERI. 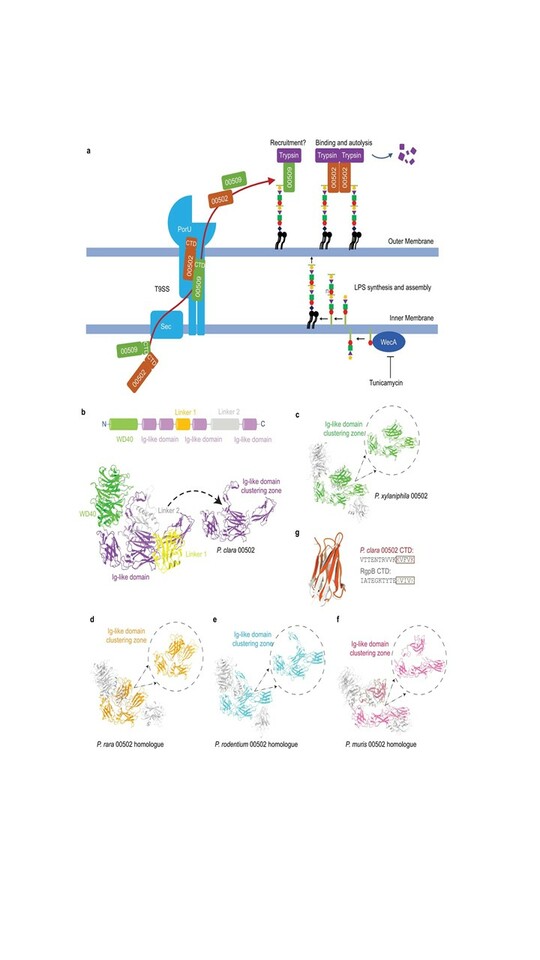