Interdisicplinary collaboration reveals how one superbug adapts to antiseptics

The story behind our new paper is one of determination, innovation, and perhaps most importantly, collaboration. The Technology Development Group at Public Health England (PHE) has a long-running interest in bacterial adaptation to antiseptics and disinfectants—commonly known as biocides. In parallel, the Mason lab at King’s College London (KCL) focuses on the metabolic and biophysical phenomena that occur when bacteria are challenged with cationic antimicrobials. I am fortunate to be supervised by scientists in both groups, who came together to answer a key question: what metabolic and genetic changes allow Pseudomonas aeruginosa to adapt and develop increased resistance to the antiseptic octenidine? As we discovered, the overall picture looks like this: 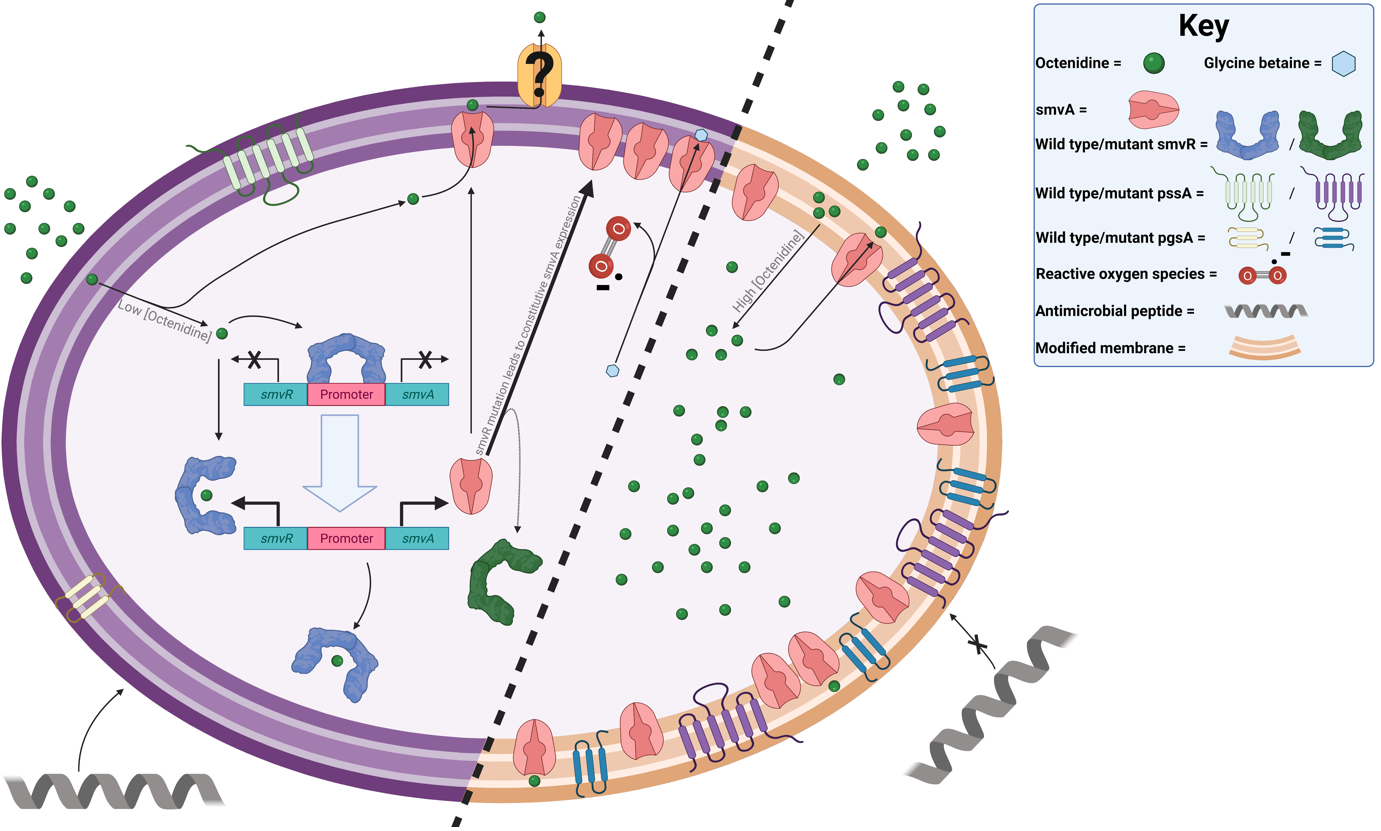 Above: Schematic of molecular adaptations found in Pseudomonas aeruginosa upon exposure to increasing concentrations of octenidine. Genetic changes (mutations in smvR and subsequent smvA overexpression) are shown on the left; metabolic changes and membrane remodelling (displayed as a yellow membrane) on the right.

First, some background: octenidine is one of the most used antiseptics in neonatal intensive care units (ICUs), but little is known about if and how pathogens develop increased resistance to it. Previous work from the PHE team had shown that the critically threatening Gram-negative pathogens Klebsiella pneumoniae and P. aeruginosa can develop stable resistance to antiseptics upon prolonged (and increasing) exposure.1,2 Whilst the levels of increased resistance in these studies did not usually reach the working concentration of the antiseptics, there was a clear reduction in the safety margin between the in-use concentration and the minimum inhibitory concentration (MIC) of the adapted strains.  Furthermore, they had shown that this exposure can confer cross-resistance to other antimicrobials like the “last resort” antibiotic colistin.2 It will come as no surprise to any Nature Microbiology Community readers that resistance to last resort antibiotics is extremely concerning for our continued ability to treat disease—hence why it was so important to investigate the mechanistic bases for increased resistance to antiseptics.

In these studies, bacterial populations were exposed to doubling concentrations of octenidine, starting at 0.25x MIC. Serial passage through these increasing concentrations led to an increase in octenidine MIC, as shown by the coloured lines in the figure below. The PHE team identified 3 key genes which were mutated during adaptation to increasing octenidine concentration in 7 different clinical isolates of P. aeruginosa: pssA, pgsA, and smvR. The first two encode phosphatidylserine and phosphatidylglycerol synthase enzymes respectively, involved in membrane remodelling; the latter encodes a Tet-family repressor protein governing the expression of the efflux pump SmvA. Adapting BreSeq, a software developed to detect low frequency SNPs in evolutionary experiments, we further identified the first detectable mutation to arise as a deletion of the bases coding for the duplicated amino acids 106-109 (Met-Ala-Ala-Leu) of SmvR. This occurred reproducibly, in 11 out of 14 adaptation studies in 7 different P. aeruginosa strains. As the figure also shows, the deletion in SmvR was present in 53%—100% of strains by passage 3 (i.e. by the time passaged strains were exposed to 1x MIC of their WT parents). 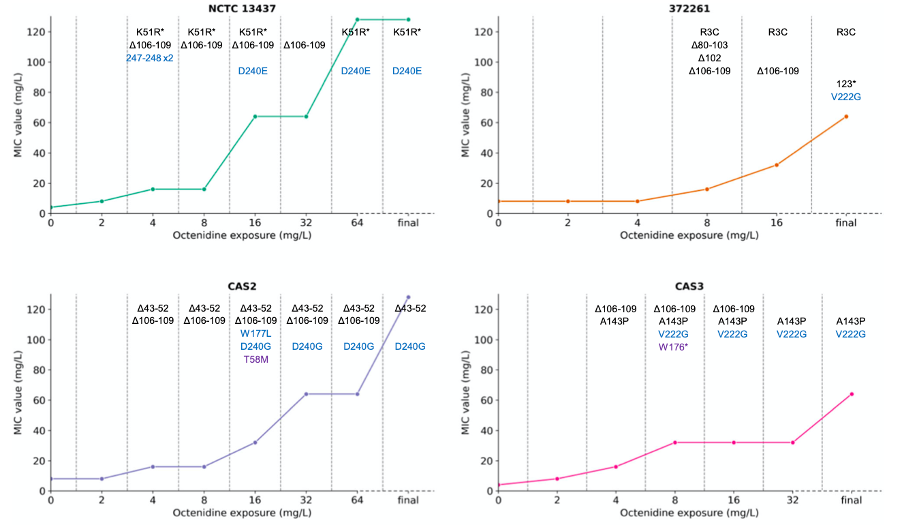 These findings were further bolstered by evidence from a simulated clinical setting, sink traps taken from UK hospitals. This showed that P. aeruginosa samples released into the sink-trap water, from mixed species biofilms exposed to regular in-use concentrations of octenidine also bore this mutation. To validate the findings, the PHE team reproduced the most relevant mutations in a single, well-characterised background: the lab strain PAO1. To do so, yet more innovative science was required. The challenge of developing markerless, targeted point mutations in P. aeruginosa was solved with the help of the SEVA community by adapting a method from Pseudomonas putida.

These isogenic mutants proved key to teasing apart the complex interplay regulating increased octenidine resistance. Adaptation and resistance are dynamic processes which involve changes at all levels of a cells’ organisation, from its genome, through its transcriptome, to its metabolome. Our interdisciplinary team was uniquely suited to study these phenomena at all levels, bringing our complementary skills to bear on these mutants: from biophysical and spectroscopic techniques, transcriptomic measurements, and even transmission electron microscopy thanks to the Centre for Ultrastructural Imaging at KCL.

Researchers in the Mason lab were able to use the mutants to provide a systems-level overview of the metabolic adaptations associated with these mutations. To do so, we used a combination of techniques: fluorescence measurements to determine membrane parameters (order and fluidity through Laurdan GP and DPH anisotropy respectively), and high-resolution magic-angle-spinning nuclear magnetic resonance (HR-MAS NMR) metabolomics to determine relative levels of metabolites in the mutants. The latter technique involves spinning a bacterial pellet at high speed, allowing for sharper lineshapes and better separation between signals. While these were established methods in the group, they were adapted for use P. aeruginosa for the first time as part of this project. 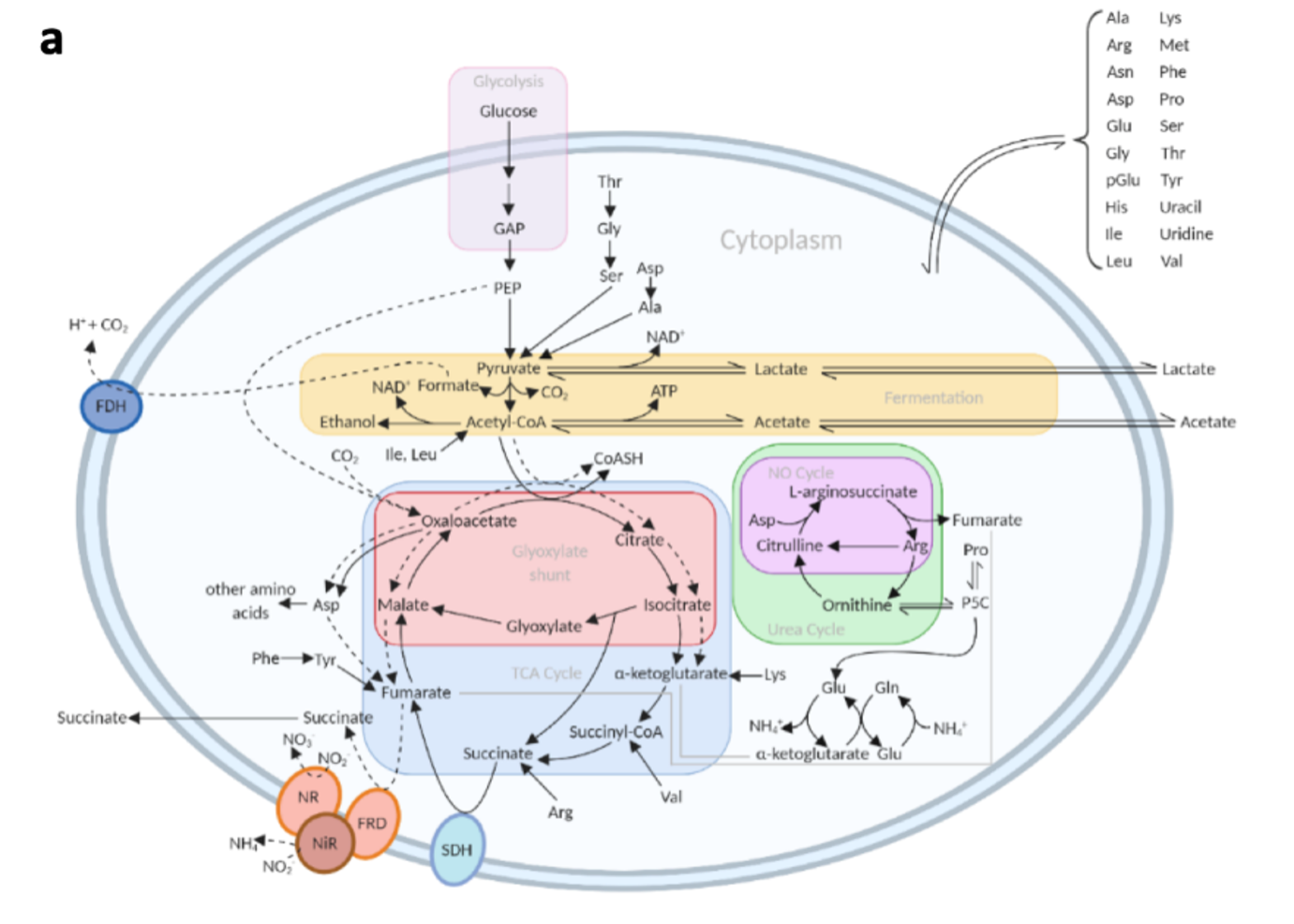 Above: Diagram of some of P. aeruginosa’s metabolic pathways, including key metabolites with concentrations found to be altered upon octenidine adaptation/exposure.

As shown in the figure, this metabolomics approach allowed us to discover that central carbon metabolism was altered in all isogenic mutants bearing a mutation in only one of smvR, pssA, or pgsA. These exhibited notable increases in acetate production and glutamate consumption, leading us to conclude that these mutations may cause P. aeruginosa to prioritise use of the glyoxylate shunt rather than the reactive-oxygen-species-producing TCA cycle. Coupled with increases in intracellular ethanolamine, ornithine, and putrescine, a clear picture emerged: one in which single mutants appeared to be suffering from oxidative stress. This effect was reversed in double mutants, which indicated that mutations in smvR coupled with pssA or pgsA have a synergistic oxidative-stress-reduction effect, as well as providing higher levels of resistance to octenidine.

As mentioned, PHE researchers were also able to measure gene expression via qRT-PCR on the isogenic mutants, both in the presence and absence of octenidine at 0.25x MIC. This allowed us to verify that genomic changes were mirrored at the transcriptome level. These experiments confirmed that the efflux pump SmvA and its repressor SmvR were constitutively overexpressed in all mutants, regardless of octenidine exposure. Strikingly, overexpression showed order-of-magnitude differences between the SmvR:PssA double mutants—despite there being only subtle differences in PssA mutations (D240E vs D240G).

Taken together, these findings establish a novel link between efflux, membrane remodelling, and oxidative stress. We will undoubtedly continue to explore this link and its broader significance in Gram-negative adaptation to cationic antimicrobials. The strength of this paper lay in the complementary skillsets each of the researchers contributed, leading to a whole much greater than the sum of its parts. Though it was at times challenging to communicate the significance of findings across disciplines, both teams were determined to rise to the occasion, and produced a great paper collaboratively. To learn more about our findings, read the full paper by clicking the following link: https://www.nature.com/articles/s42003-021-02566-4 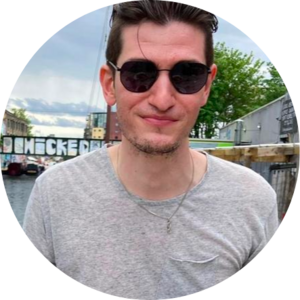