Cystic fibrosis is not only a lung disease. It is a whole body disease that initially presents in the gastrointestinal tract. Current research believes the loss of CFTR in the epithelia is the contributing factor, yet our research would suggest there is more to it.
Callie Scull
PhD Candidate , LSUHSC NOLA
Follow
Like Be the first to like this
0

Cystic fibrosis (CF) is a genetic disease that affects ~100,000 people worldwide and ~ 40,000 people in the United States.  It mainly affects Caucasians, with 1 in 3000 babies being born with CF. Other demographics are affected by CF as well, with 1 in 17,000 African Americans and 1 in 31,000 Asian American babies being affected. This disease is caused by mutations in the cystic fibrosis transmembrane conductance regulator (CFTR) gene, which encodes a chloride channel.

Clinically, adult CF patients typically suffer from severe lung disease, which often requires life-long treatments and sometimes, even lung transplants. Yet, what’s far less known, is that individuals with CF develop intestinal problems before and after birth.CF newborns have to be monitored closely for potential development of intestinal complications and blockage, called meconium ileus, do not occur. And if they do, they must be treated urgently, to ensure survival. With the use of constant laxative supplementation, antibiotic regimens, and specialized diets, the intestinal component of CF disease is manageable, but constipation and distal intestinal obstruction syndrome persist through life. Furthermore, bacterial overgrowth in the small intestine (SI) and bacterial dysbiosis in the large intestine (LI) constitute a major condition in CF

Studies have looked at the microbiota of various CF models, from human, to rabbits, mice and ferrets. All studies conclusively state that CF individuals/models have an altered microbiota when compared to their healthy cohorts. Studies also found that they have less diversity in the bacterial taxa present, indicating an unhealthy gut milieu.

Our study investigated this matter from a different angle to address if the immune system has any part in the intestinal disease of CF?

Our lab generated 3 immune knockout mouse models to directly assess how the loss of CFTR on neutrophils (Neu-CF), macrophage (Mac-CF), and myeloid lineage cells (Mye-CF) contributed to the altered microbiota in CF mice. We found that the immune defect does play a role in influencing the intestinal microbiota, as the Neu-CF mice and Mye-CF mice had differing taxa when compared to WT mice.

By doing this, we were able to directly assess how the immune defect contributes to changes in the microbiota by comparing WT-to-CF vs CF-to-CF. These mice have the same epithelia (CF) but now the WT-to-CF mice have a WT (CFTR+/+) immune system.

What we found was that the immune defect contributed the most to the altered gut microbiota in the small intestine. This suggests that the altered taxa seen in the small intestine is due to the ill functioning immune system. Interestingly, we also performed bacterial predictive functional analysis using PICRUSt2 and saw that when comparing WT-to-CF vs CF-to-CF mice, bacterial predictive functions involved in bacterial virulence were decreased in the WT-to-CF mice. Suggesting the healthy immune system selected for healthier and less virulent bacteria.

When looking at WT-to-WT vs WT-to-CF comparisons, we see that the epithelial defect contributed the most to the difference in taxa in the large intestine. Thus, both of these findings suggest that the immune defect and epithelial defect play a role in the altered gut microbiota seen in CF individuals and animal models.

Here, we see that both the epithelial defect and the immune defect contribute to the CF intestinal disease and need to be equally investigated in future studies. These findings help to broaden the current knowledge and scope of CF research today. By understanding how the loss of a functional CFTR contributes to altered immune function and influences the gut microbiome, scientists can continue to make bounds in finding a cure for CF.

Callie Scull
PhD Candidate , LSUHSC NOLA
Follow
I am a PhD candidate in Microbiology, Immunology, and Parasitology. In fewer words, I would consider myself a mucosal immunologist. My current work focuses on cystic fibrosis (CF) and how the immune system plays a role in the intestinal disease by affecting the gut microbiota and inflammation. 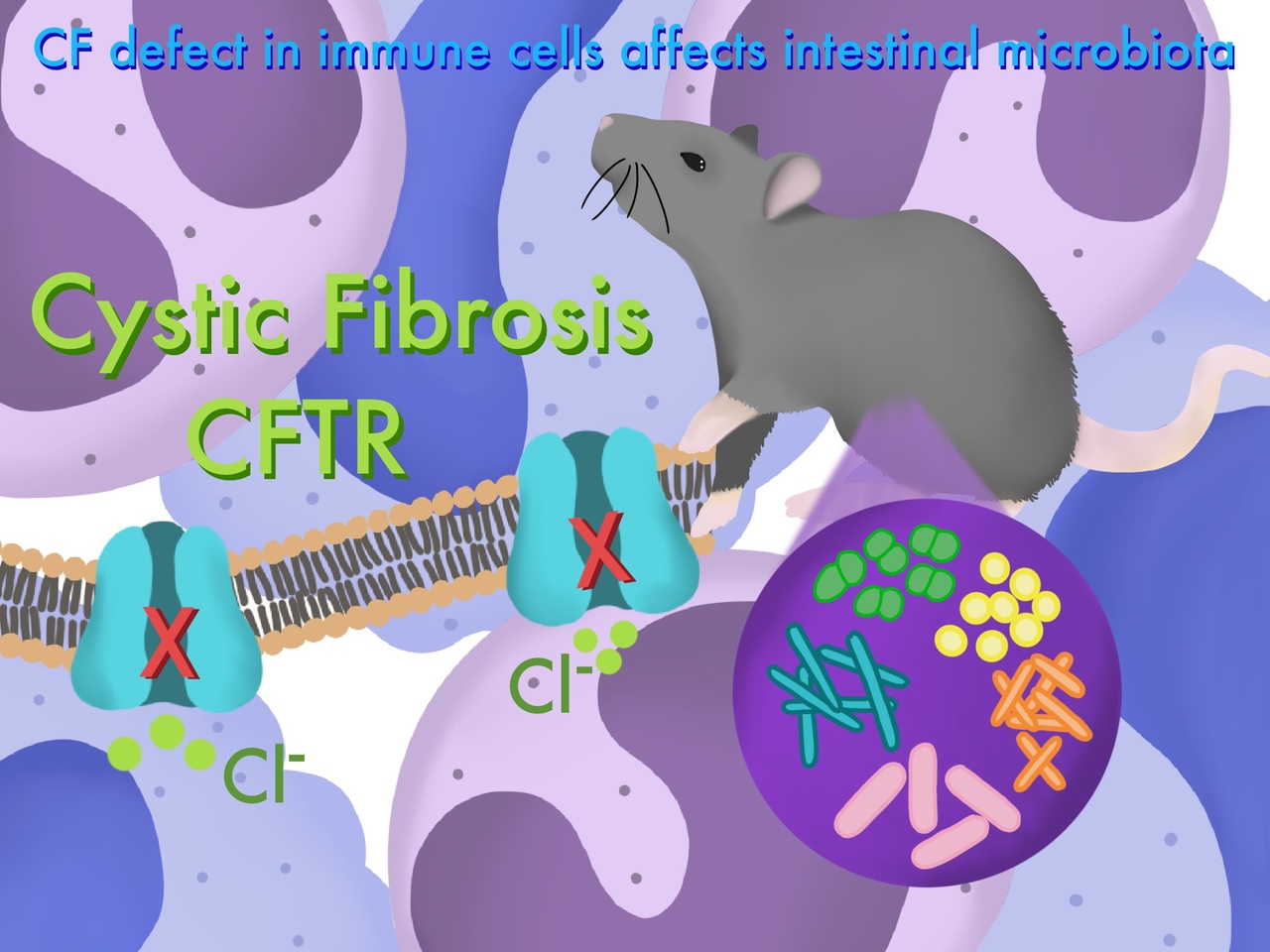 Cystic fibrosis is not only a lung disease. It is a whole body disease that initially presents in the gastrointestinal tract. Current research believes the loss of CFTR in the epithelia is the contributing factor, yet our research would suggest there is more to it.