In this study we tested the effect of soil geometry on microbial growth and nutrient consumption using microfluidics.
Carlos Arellano-Caicedo
Researcher, Lund University
Follow
Like Liked by Laura V. Flórez
0

Soil is the most complex biomaterial on earth with a wide variety of chemical and physical conditions that vary within small distances. This heterogeneity gives soils special properties, such as being an enormous pool of organic carbon. One of the hypotheses that explain such accumulation of carbon-rich substrate in soils is that it is separated from microbes by a complex matrix that impedes their contact. Because of this, soils contain at the same time starving microbial communities, and an immense amount and variety of carbon rich substrate. The complexity of the soil pore space could explain this paradox. Understanding the interactions between the heterogeneity of soils and the microbial communities that inhabit it is crucial for keeping this carbon buried in soils.

Studying the effect of soil structure complexity on microbial communities has been challenging during the last years mainly due to methodological limitations. The obscure nature of soil impedes a clear observation of the effects and soil characteristics on microbes. For this reason, we have developed a method based on microfluidics to elaborate an artificial microhabitat that simulates the soil pore space. Microfluidics is a technique that allows the manipulation, control, and design, of structures and fluids at the micrometer scale.

At the beginning of my PhD we had the necessary tools to elaborate microfluidic devices and we had an hypothesis: soil physical complexity impedes the contact between microbes and substrate. But what exactly is “complexity”? To find this out and to know exactly how our microfluidic device should look like we studied deeply the characteristics of the pore space. We looked at the many tomography images of soils available from several studies, in order to find what parameters are the ones that represent “complexity”. After many discussions we concluded that some of the parameters that describe complexity could be, among others: the sharpness of the angles of the pore channels, the fractal dimension of the pore space, the presence of air-liquid pockets, and the patchiness in nutrient distribution.

Testing all these parameters at the same time could easily escalate into many and tricky interactions. Thus, we decided to test each one at a time. In the present study we focused on the sharpness of the turning angles inside the pore channels. Using microfluidics, we designed microhabitats that simulated the soil pore channels in a transparent rubber like material. These microfluidic devices contained a series of microscopic channels with different turning angle and turning order, that served to test the effect of these two parameters on microbes. These parameters were used to test the effect of physical complexity, having relatively straight channels, to simulate a simple structure, to sharp-angled channels, simulating a complex environment. For the experiments, we used lab fungal and bacterial strains that are naturally found in soil, and we tested the effect the turning angle parameters in their growth, interaction, and nutrient consumption.

The results we obtained show that complex channels reduced fungal and bacterial growth, when compared to the growth in less complex channels. This reduction was stronger in fungi than in bacteria mainly because sharp turning angles occasion the loss of hyphal growth direction. On the other hand, the substrate consumed inside complex channels was reduced compared to more straight channels. This, however, occurred only in channels where bacteria and fungi were growing together. Finally, fungi were not affected by the presence of bacteria, whereas bacteria experienced an increase in habitat complexity when fungi were present, because the hyphae strongly reduced the available space for bacteria. Channels clogged by fungal hyphae reduced bacterial growth in complex channels, increasing the effect of the channel turn angle.

These results show that the sole geometrical characteristics of a pore space can reduce microbial biomass and nutrient consumption. Thus, the peculiar property of soils to accumulate carbon despite the high presence of starving microbes could be explained by the complexity of its pore space. Although more parameters, such as nutrient patchiness and air-liquid interphases, remain to be tested, the results of our experiments indicate the importance that microhabitat characteristics have on microbial growth. Having a deeper understanding on how these soils properties affect microbial processes can give us a powerful tool to fight climate change by preventing carbon losses from soil. 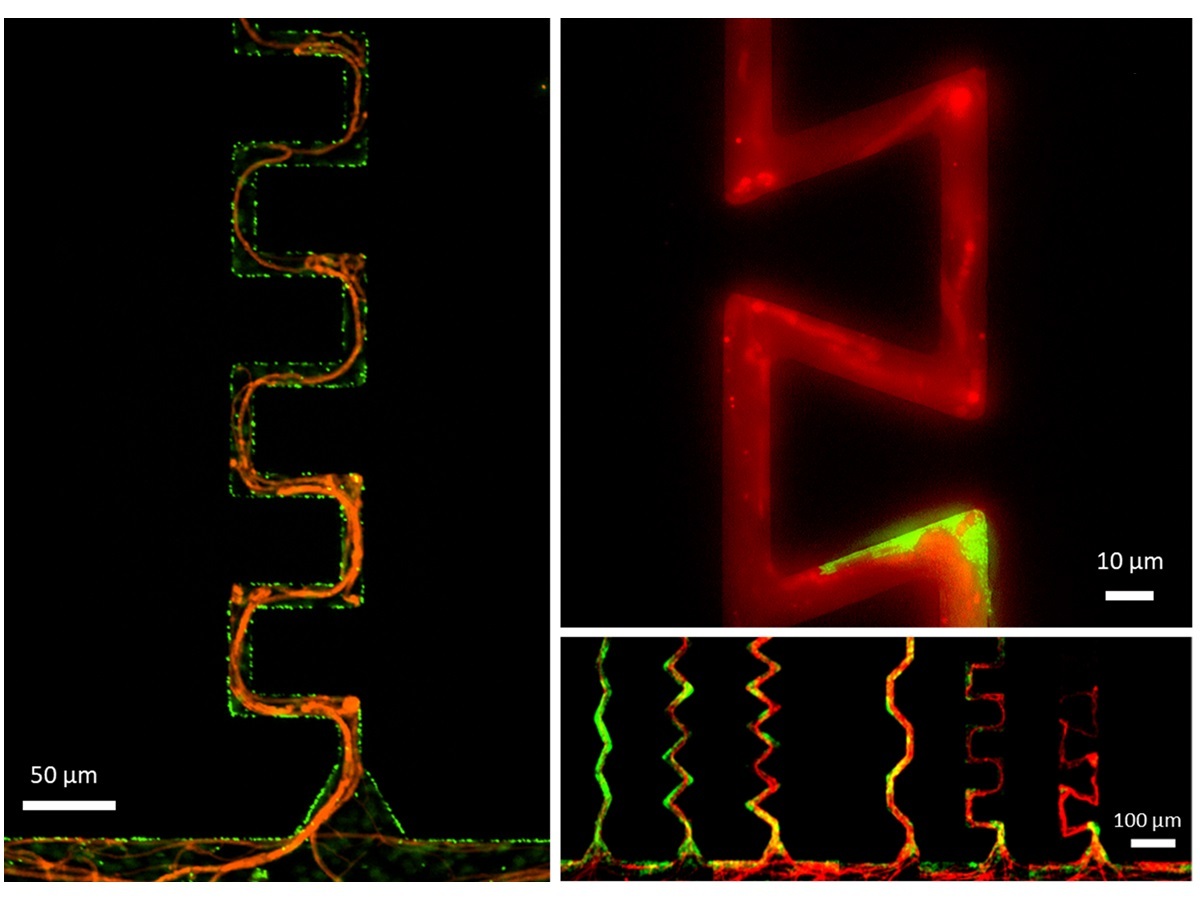 In this study we tested the effect of soil geometry on microbial growth and nutrient consumption using microfluidics.