Our evolutionary experiments of the insect-E. coli artificial symbiosis were a long-term project lasted for two years. Here, I will describe our ingenuities for finishing this long-term project and what we are seeing beyond it.
Ryuichi KOGA
Group Leader, National Institute of Advanced Industrial Science and Technology
Follow
Like Liked by Massimo Tosco and 3 others
0

Experimental evolution of Escherichia coli in an insect host reveals that a single mutation in the carbon catabolite repression pathway can transform a non-symbiotic microbial species into an insect mutualist.

"Good, fresh things every day of the year"1

Our evolutionary experiment was a long-term project that lasted for two years, and the brown winged green bug Plautia stali harboring E. coli in replace of the original Pantoea symbionts is essentially vulnerable2. Therefore, we had to devise a stable rearing system for such vulnerable insects for this long period. The first is to prevent the contamination of unfavorable bacteria that would ruin the experiments3. The original symbiotic bacteria of the stinkbug or their close relatives accidentally took over the symbiotic niche from E. coli. In such cases, the symbiotic midgut the stinkbugs exhibited not milky white of the crypts filled with E. coli but sadly vivid yellowish color of carotenoids produced by these unwanted ones. To prevent the occurrence of such tragedy, we adopted E. coli strains harboring a kanamycin resistance gene and fed the insects with sterilized peanuts and water containing this antibiotic in disposable clean food containers. In addition, we took care of zoning in our laboratory. Moreover, we established the culture-free, contamination check method by quantitative PCR. It enabled us to administrate the homogenate of the isolated midgut to bacteria-free nymphs immediately after the preparation. While these efforts were made to prevent contamination, the most important ingenuity was to ensure a stable supply of high-quality eggs throughout the year. As mentioned, E. coli-infected stink bugs are vulnerable essentially, and especially those hatching from eggs of poor quality will die easily. Our evolutionary experiments of the insect-E. coli artificial symbiotic system can also be described as "recurrent infection experiments to evaluate the effect of E. coli mutants on stinkbugs”. So, to obtain reproducible results as consistently as possible, it is necessary to use stinkbug eggs of good and stable quality. To this end, we have established the rearing protocol to keep their rearing environment clean with consideration for their health and allow them to produce a large quantity of high-quality eggs constantly. Thanks to the rearing method and high-quality stinkbug egg supply system established in this project, we managed to continue rearing E. coli-infected stinkbugs with low survival rates and carry out evolutionary experiments.

More than one route to the summit, no doubt.

In this evolutionary experiment project, two evolutionary lines showed significant improvements of the insect performance, and the evolved E. coli of these lines had mutations in the carbon catabolite repression (CCR) regulation4. The engineered E. coli strains generated by introducing these mutations formed colonies with the same properties as the original evolved E. coli and improved the performance of the host stinkbug significantly. However, the degree of the improvement was smaller than that of the original evolved E. coli strains. These results suggest that the original evolved E. coli must have other mutations that explain this difference, in other words, mutations other than those in the CCR regulatory system can also improve the performance of the stinkbug host. Interestingly, the original symbionts of P. stali seem to have an intact CCR regulatory system, suggesting that these bacteria have established their mutualisitc relationship with their hosts through mechanisms that do not require mutations in the CCR regulation. These facts indicate that mutualism can evolve by multiple routes.

Aiming for even greater heights

Comparative genomic analyses of extant symbiotic bacteria and closely related free-living bacteria have proposed the hypothesis that essential symbionts may have evolved from ancient free-living bacteria through evolutionary events such as explosions of insertion sequences, loss of survivability outside the host body, simplification of metabolic pathways, and genome reduction5. While this hypothesis seems highly plausible, empirical studies supporting it are scarce. Above all, it is a complete mystery what factors prompted a bacterium to change its lifestyle from free-living to symbiotic at the very beginning of symbiotic evolution. I believe the mutations in the CCR regulation that we found may be one of such evolutionary entry points to the establishment of mutualism. If so, our evolved E. coli would still need to go through many evolutionary events to reach the summit of the essential symbiosis as represented by Buchnera symbiont of aphids6. We want to reproduce these evolutionary events in the laboratory and indeed different types of evolutionary experiments are underway. Hopefully, we will observe large-scale structural changes and even shrinkage of E. coli genome on laboratory-level time scale! 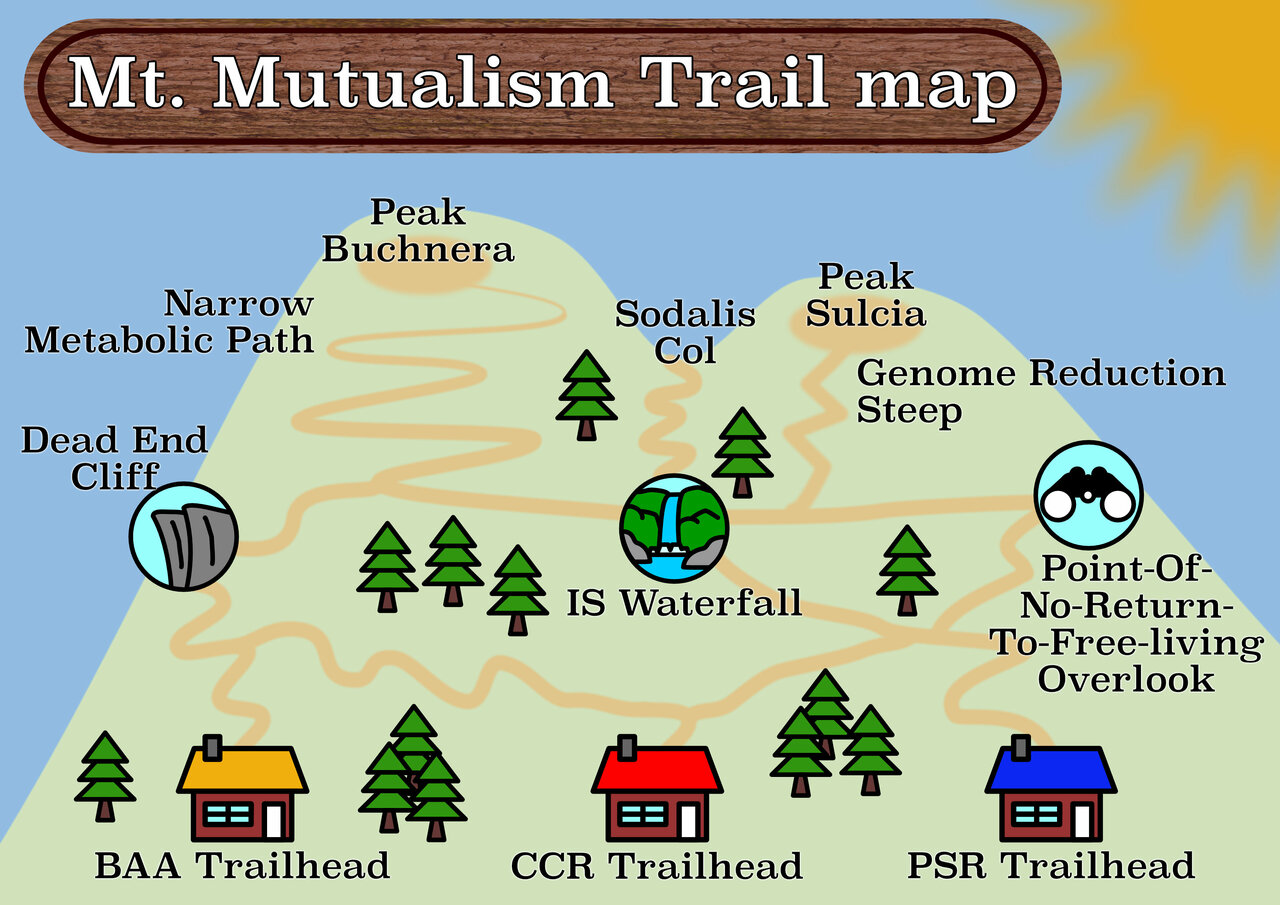 Our evolutionary experiments of the insect-E. coli artificial symbiosis were a long-term project lasted for two years. Here, I will describe our ingenuities for finishing this long-term project and what we are seeing beyond it.