How macrophage interactions with apoptotic cells might contribute to parasite infection and pathology in Chagas disease?

A long research way from the first discovery…

Chagas disease is considered a neglected infectious disease that is endemic in Latin America. Patients infected with the protozoan parasite Trypanosoma cruzi can develop a progressive cardiac illness that causes heart malfunction, heart failure and death. We still do not have vaccines or medicines that either prevent or treat the established disease, in part because the mechanisms of chronic pathology remain elusive.

The immune system is important to control but fails to eliminate parasite infection. Moreover, both the immune response and chronic infection cause damage to the affected tissues and organs. Our research focuses on the reasons why immune cells such as T lymphocytes and macrophages are insufficient to eradicate infection.

Three decades ago, I and my PhD adviser observed that T cells from T. cruzi-infected mice showed a defective proliferative response compared to T lymphocytes from healthy mice. Furthermore, T cells from infected mice started a cell death program (apoptosis) and thereby did not divide to produce new cells to fight infection.

By the end of the century, the clearance of apoptotic cells by macrophages was no longer considered a simple silent process that prevented the leakage of dangerous cell contents but also a suppressive, anti-inflammatory response. Then, I thought that macrophages would be in trouble to simultaneously deal with intracellular pathogens such as T. cruzi and remove apoptotic cells generated during infection.

I and my first PhD student tested this hypothesis by studying how parasite-infected macrophages behave after the phagocytosis of apoptotic lymphocytes. Whereas T cells help infected macrophages, which then kill parasites, the interaction with apoptotic cells changes macrophage metabolism and promotes parasite replication within macrophages. We also showed that the injection of apoptotic cells increased parasitemia in T. cruzi-infected mice. For this research published in ‘Nature’1, we received international awards that further promoted our scientific projects and careers.

My following PhD students investigated which mechanisms were involved in the apoptosis of T lymphocytes in experimental Chagas disease. As a proof of principle, we treated infected mice with apoptosis inhibitors to evaluate the outcomes in T cell-mediated immunity. We found that treatment not only improved the immune responses mediated by T lymphocytes and macrophages but also considerably reduced parasitemia.

In 2017, Thaís Rigoni joined this research, which had been carried out by Mariela Piccin and Natália Vellozo. The objective of Rigoni´s thesis was to unveil potential receptors involved in the efferocytosis (detection and phagocytosis) of apoptotic lymphocytes during T. cruzi infection. We finally gained access to the tools to address the role of TAM (Tyro3, Axl, Mer) receptors in T. cruzi infection by employing the Axl and Mer-defective mouse strains.

First, we evaluated bone marrow-derived macrophages cultured with T cells from infected mice that provided both helper T cells and proapoptotic T cells. Treatment with a TAM receptor inhibitor not only prevented efferocytosis but also increased hallmarks of M1 activation, such as the expression of induced nitric oxide synthase and nitric oxide production.

We then used synchronized macrophages derived from wild-type (WT), Axl-/- and Mer-/- mice to study the role of each TAM receptor in the efferocytosis of T cells from T. cruzi-infected mice. We found that both Mer (60%) and Axl (30%) accounted for the removal of apoptotic cells by macrophages. Remarkably, Axl defective macrophages expressed the highest M1 responses to helper T cells from infected mice. Moreover, stimulated Axl-/- but not Mer-/- macrophages controlled intracellular infection better than WT macrophages. These findings indicate that Axl suppresses M1 responses and thereby promotes parasite infection.

Next, we infected WT and Axl-defective mice with T. cruzi to evaluate efferocytosis and immune responses. Peritoneal macrophages from infected Axl-/- mice expressed reduced ability to attach to fluorescent apoptotic cells and to interiorize apoptotic cells. Furthermore, apoptotic T cells accumulated in the spleens of Axl-/- mice compared to their WT counterparts. We then addressed macrophage function during infection and found that macrophages from infected Axl-/- mice showed an increased M1 phenotype and ability to contain parasite infection.

Finally, we investigated how Axl-/- and Mer-/- mice deal with T. cruzi infection and Chagas disease. We showed that parasitemia did not peak in Axl-defective mice in contrast to WT and Mer-/- mice. More interestingly, the hearts of infected Axl-/- mice developed reduced inflammatory responses and fibrosis throughout acute infection. By microscopic inspection of heart sections, we observed parasite nests inside the myocytes (Fig. 1). T. cruzi parasites replicate within these nests (Fig. 1a). We also found a ruptured parasite nest in the heart section from an infected Axl-/- mouse, whereas inflammatory cells approached the nest (Fig. 1b). Furthermore, more macrophages expressed M1 activation in the hearts of infected Axl-/- mice than in those of WT or Mer-/- mice.

Altogether, these results indicate that Axl disrupts macrophage ability to control parasite infection and thereby contributes to the development of heart pathology in the experimental model of Chagas disease. We expect that the elucidation of the mechanisms involved in pathogenesis will translate into the development of new tools to prevent or treat disease.

This research was conducted by nine women who shared the joy of new discoveries. This work was developed at the Brazilian public university that counted with restricted funding resources in a political scenario which was adverse for science in Brazil. 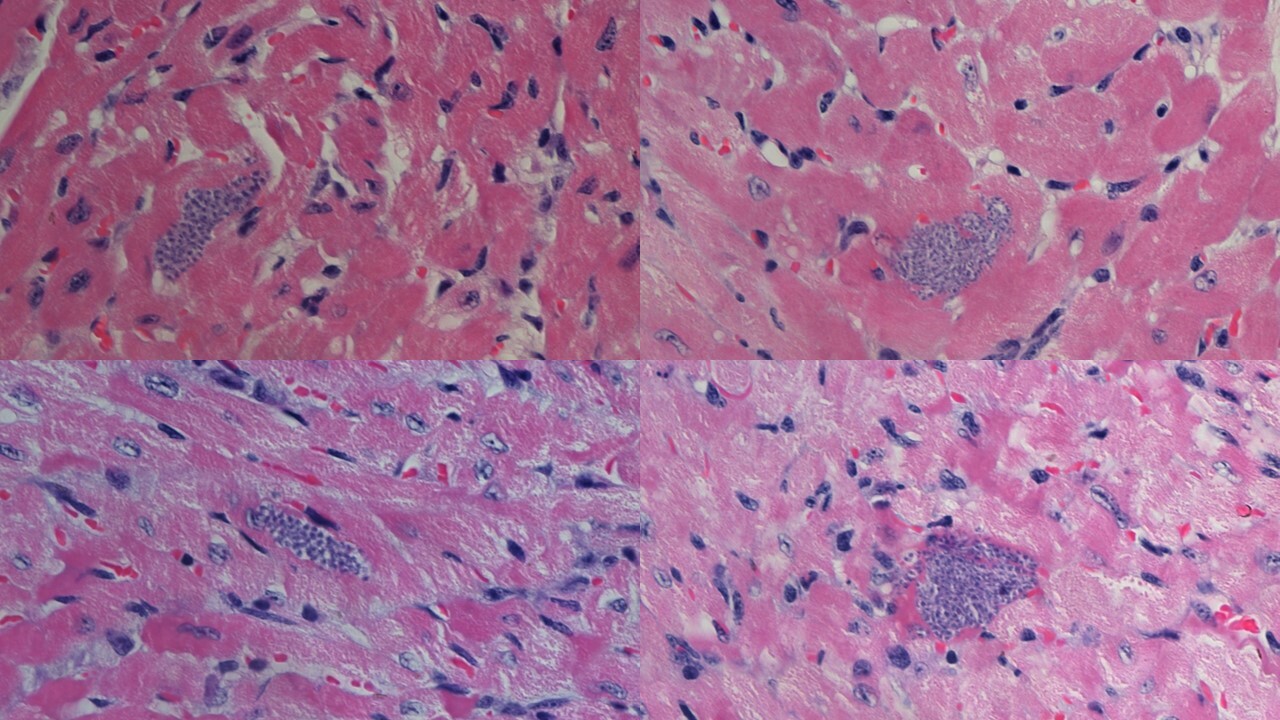 How macrophage interactions with apoptotic cells might contribute to parasite infection and pathology in Chagas disease?