A reciprocal interplay among host genetic variations, the root-associated microbiota and the agronomic traits of crops is unraveled by an integrated GWAS, MWAS and mGWAS method.
Yayu Wang
Assistant researcher, BGI-Shenzhen
Follow
Like Liked by Juan José Pierella Karlusich and 2 others
0

Improving plant health and growth is of paramount importance in horticulture where increased and improved crop yields are critically needed to feed the growing world population. Genome-wide association studies (GWAS) have substantially advanced our understanding of host genotype-phenotype associations (Wang et al., 2018; Du et al., 2018), but are often do not fully explain the phenotypic variability within groups. This missing information has limited our ability to improve the yield and quality of plants through genetic engineering.

The microbiome has emerged as a non-genetic component that can influence host phenotypes. Plant roots have a rich and diverse microbiome that can affect the phenotypic plasticity and fitness of plants, potentially beyond host genetics and breeding (Goh et al., 2013). Knowing which “marker microbes” in additions to which “marker genes” determine plant phenotypes is essential to improving crop performance.

Foxtail millet (Setaria italica) is an important regional crop in arid and semi-arid areas, especially in East Asia, because of its highly efficient water-use and drought tolerance (Qie et al., 2014). Foxtail millet also provides an excellent model for studying abiotic stress as most of the foxtail millet accessions are primarily abiotic stress tolerant particularly to drought and salinity. Although GWAS has revealed key loci for early and late flowering times and blast-resistance in foxtail millet (Jia et al., 2013; Li et al., 2021), the loci associated with plant growth or yield are still not known. Through large-scale sampling and analysis, microbial composition of the root zone microbiota of foxtail millet and its correlation with the yield trait were identified in our previous study. The findings provided insights into potential agricultural improvement of foxtail millet by root microbiota modification (Jin et al., 2017). Nevertheless, the identity and relative importance of factors that shape host-microbe interactions and the resulting phenotypes remain poorly understood.

In this study, we unravel the associations between the genomic variations, phenotypes, and rhizoplane microbiota of 827 foxtail millet cultivars using an integrated GWAS, microbiome-wide association studies (MWAS) and microbiome genome-wide association studies (mGWAS) method. We reveal for the first time that plant genotype determines the phenotypic consequences of root-associated microbiota. Specifically, we performed GWAS and microbiome-wide association studies (MWAS) on growth and yield traits of foxtail millet and quantified the effects of marker SNPs and marker microbes on these agronomic traits. We isolated marker strains from the field and validated the growth-promotion and -suppression effects of microbial markers predicted by MWAS, indicating their great potential for application in agriculture. In addition, the genes induced by growth-promoting bacteria varied among marker strains, indicating that plants have customized responses to different bacteria.

Using an SNP-based approach, the heritability for individual OTU was calculated. Bacillales and Gp4 orders enriched greater numbers of highly heritable OTUs when compared with the lowly heritable fraction, implying that these bacterial orders were more easily impacted by host genotypes of foxtail millet. The heritable taxa from foxtail millet strongly overlapped with sorghum and maize, implying a similar co-evolution pattern of plant and their microbiota across hosts. We then performed microbiome genome-wide association studies (mGWAS) on root microbiota and uncovered the host genetic variations that impact the assembly of the root-associated microbiota. SNPs that associated with the microbiome were within genes related to plant immunity, plant metabolites, hormone signaling and nutrition uptake. Among these, the host immune gene FLS2 and transcription factor bHLH35 are widely associated with the microbial taxa of rhizoplane. However, the host plant still employed different genes to interact with different taxa, suggesting a taxa-dependent regulation model.

Strikingly, we found that root microbes affect agronomic phenotypes in a host genotype-dependent manner. This discovery will profoundly affect the approach to optimizing agriculture, and suggests that precision genotype-dependent microbial management will be key to develop high-yielding cultivars.

Collectively, our work reveals a reciprocal interplay among host genetic variations, the root-associated microbiota and the agronomic traits of crops. Based on the genotype-dependent promoting and suppressing effects of marker strains on phenotypes, we propose a “personalized feeding strategy” with precision microbial biofertilizers in future agriculture practices.

Yayu Wang
Assistant researcher, BGI-Shenzhen
Follow
My research interests include the plant and microbiome interactions and the associations of root microbiome with plant growth, productivity and quality. 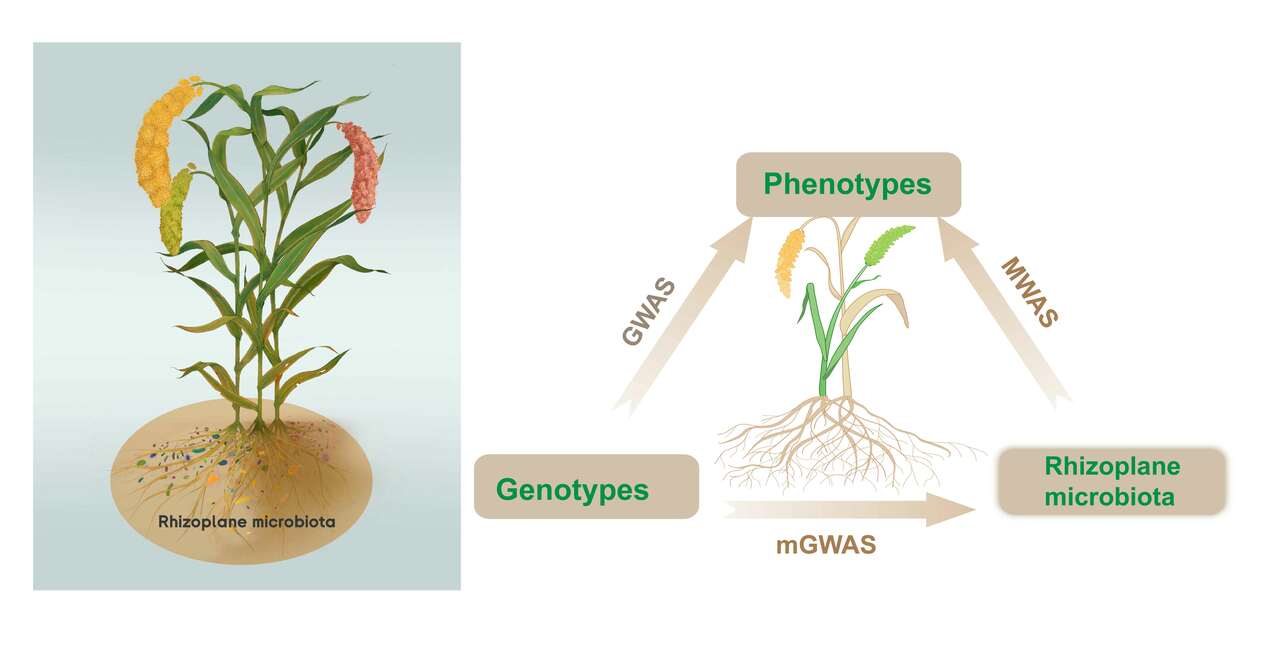 A reciprocal interplay among host genetic variations, the root-associated microbiota and the agronomic traits of crops is unraveled by an integrated GWAS, MWAS and mGWAS method.