In our study (1), we found an association between gut-microbial community and efficacy of albendazole-ivermectin to treat soil transmitted helminth (STH) infections. In the course of this post, I will give you my personal thoughts on that project.
Julian Dommann
Master Student, Swiss TPH
Follow
Liked by Evelina Satkevic

Little is known about the cause of treatment failure of soil-transmitted helminth infections. Here, the authors show that pre-treatment gut microbial community composition enables predicting treatment outcome for Trichuris trichiura and hookworm infections.

When I thought of the word “worms”, I used to associate it with a vast abundance of creatures that live in the soil a few meters beneath my feet. To some extent, this connection might be right, as “worms” are truly everywhere. The subject of our research however encompasses different kinds of worms, namely soil-transmitted helminths (STHs) - parasites. Just like the worms in my front yard, helminths are a frequent encounter. They account for more than 1 billion infections every year (2), yet STH infections still belong to the neglected tropical diseases (NTDs).

Rather different from STHs – but also associated with big numbers - are microbes residing in the digestive tract of each human – the microbiome. Gut-microbes mainly encompass bacteria, fungi and viruses. Hereby, I will focus on bacteria. Numerous bacteria in the digestive system carry out essential functions for a healthy human being. For instance, they can rid our bodies of harmful toxins or assist breaking down indigestible fibers. Furthermore, gut-commensals often occupy a niche in our bodies that could otherwise be colonized by pathogenic species. The necessity of our comrades-in-arms becomes even clearer, in the context of antibiotic treatment, which can deplete commensal bacteria and therefore could lead to subsequent infections.

As a new student joining the Helminth Drug Development Unit (HDDU) at the Swiss Tropical and Public Health Institute, one has to learn and remember A LOT of new things and concepts. During my bachelors, I heard quite a bit about antibiotics and antiparasitics. Everything was put in categories, neatly packed, waiting for me to engulf it. Antibiotics were just antibiotics and antiparasitics were just antiparasitics. As always, reality is not that easy. Ivermectin is currently used in combination with albendazole to treat STH infections. While it is used as an antiparasitic, ivermectin is structurally similar to macrolide drugs which are characterized by the presence of a macrocyclic lactone group. Other macrolides mainly encompass antibiotics used to treat gram-positive bacterial infections. However, ivermectin is considered for its antiparasitic activity, and it is used during mass-drug administration (MDA) campaigns for the control of helminth infections. Essentially, ivermectin - an antibiotic-like drug – is prophylactically administered to millions of people. So at this point, my world was upside down.

As orally administered drugs pass through the small and large intestine, they are subject to interactions with the before-mentioned microbes. The pan-genome of gut microbes encompasses 150-fold more genes compared to their human host, resulting in outstanding genetic diversity and therefore considerable possibilities of interaction – also with orally administered drugs (3). For instance, enzyme-mediated degradation (3). Though I consider the microbiome as a super-complex of pacific commensals, not all interactions ought to be strictly beneficial for either the host or the individual microbes. Even more so in the case of a drug structurally similar to macrolide antibiotics.

Streptococcus spp. are frequent, gram-positive commensals in the oral microbiota, but especially dominate in terms of abundance in the small intestine (4). Several mechanisms of macrolide resistance have been identified among Streptococcus species, including mainly drug efflux, target alteration, and drug inactivation (5-7). Another recently described mechanism is bioaccumulation of drugs inside S. salivarius cells (8). It is therefore exciting to test whether a direct macrolide-resistance mechanism of Streptococci could interfere with treatment efficacy. Another logical consequence to think of is resistance phenotypes. Could a compound, structurally similar to a macrolide lead to resistance phenotypes – or even worse – broad cross-resistant phenotypes? As I was involved in generating the data for this study, I will subsequently try to functionally validate these two concepts in my master’s thesis.

Let’s broaden the view for a moment. The pipeline for new drugs regarding STHs is populated rather scarcely; recent efforts to find new treatment options rely on combinations of existing drugs. Albendazole-ivermectin is one such combination. If this combination really fails to cure some individuals due to their gut microbial compositions and we would be able to pinpoint individual species that possess big leverage in the context of treatment-failure, we could try to change the failure-associated microbiome specifically. Essentially, we would modify the human to fit to the drug. A concept that is entirely new to me. However, specifically changing the microbiome of a person will prove to be very ambitious due to its complexity – a network characterized by numerous intertwined interactions, specific to each human individual.

Additionally, provided we perform the microbiome-based efficacy analysis with other drugs and combinations, another option is to perform pre-treatment screening of patients. That way we could determine the “best-fit” treatment, before exposing the patient and the accompanying gut microbes to an ineffective treatment. This would both be important regarding treatment efficacy and welfare of patients, but also in terms of possible resistance phenotypes. If you ask me, this is a form of personalized medicine.

Research on the microbiome is an expanding field. To a newcomer, it might seem very intriguing and overwhelming given the vast diversity of organisms and interconnectivity representing it. At first, it flipped my world upside down. However, it also represents an opportunity for conceptually new attempts to treat numerous diseases. So, maybe it could change our world.

After a BSc in Molecular Biology in Basel, I started my MSc in Infection Biology at SwissTPH in 2021. Right now, I'm in the research group of Prof. Jennifer Keiser (Helminth Drug Development Unit) and working on my Master's thesis. Besides studying, I enjoy photography, cooking and riding my motorcycle. 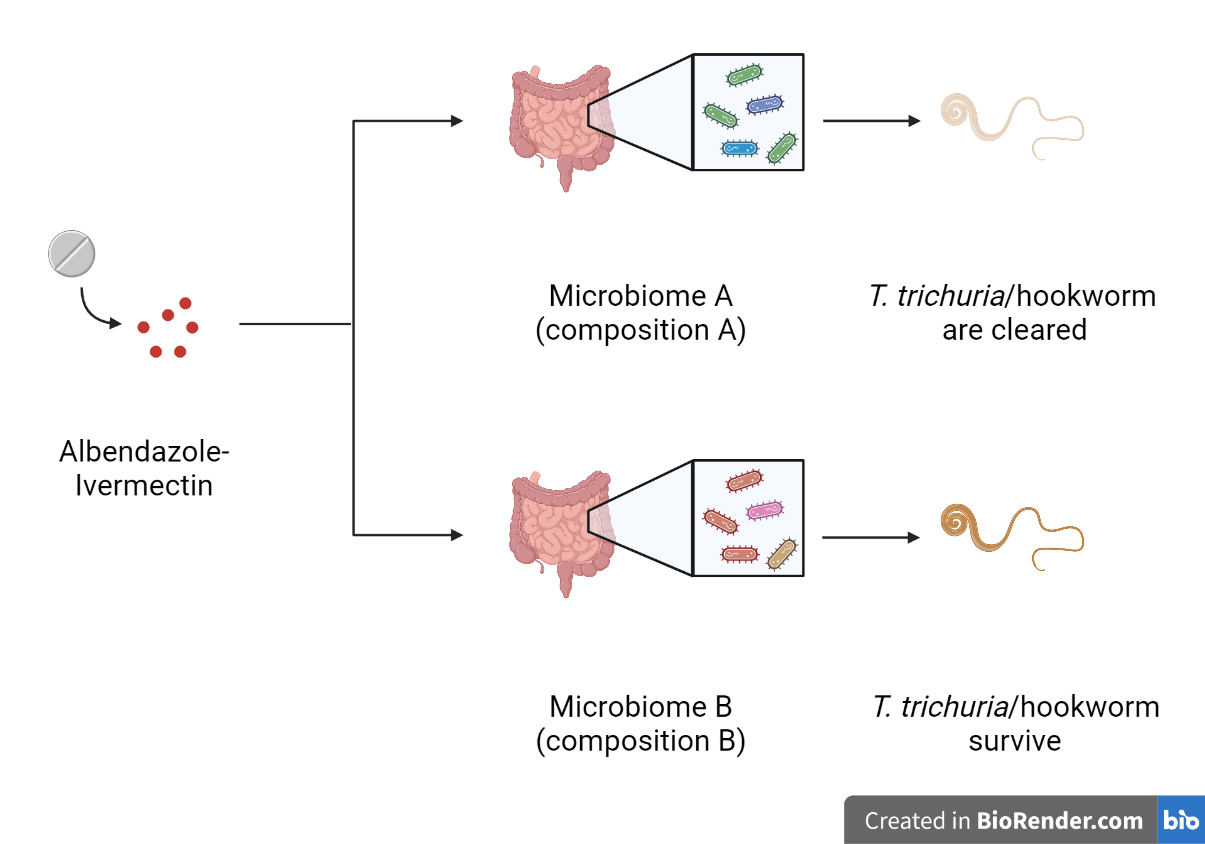 In our study (1), we found an association between gut-microbial community and efficacy of albendazole-ivermectin to treat soil transmitted helminth (STH) infections. In the course of this post, I will give you my personal thoughts on that project.