Intestinal fungal communities undergo substantial day-to-day shifts in density and composition during bone marrow transplantation. However, a subset of patients developed a stable expansion of Candida parapsilosis which was associated with worse survival.

Our guts are host to trillions of bacteria, collectively termed the gut microbiota. While these have been the rock stars of health science research in the past decade, their overlooked counterparts, the fungi, deserve more attention!

Due to the sheer number of bacteria and well-annotated bacterial databases, studying the bacterial microbiota has been easier than delving into the mycobiota. However, amplicon-sequencing of the internal transcribed spacer (ITS) of fungi also allows the high-resolution analysis of fungal communities. Care has to be taken to adapt DNA extraction methods and analysis to fungi for accurate community representation.

Gut fungi have since been implicated in multiple diseases, spanning from inflammatory bowel diseases to systemic infections. In a pilot case-control study we could show that intestinal expansion of Candida species preceded Candida bloodstream infections in patients undergoing stem cell transplantation, and could pinpoint the gut as the reservoir for these infections.

My goal was to better understand the dynamics of the fungal communities during the process of hematopoietic cell transplantation. Additionally, I wanted to know whether fungal expansion was associated with other adverse outcomes than bloodstream infections.

I analysed the fungal myco- and the bacterial microbiome in parallel in a cohort of 156 patients undergoing hematopoietic cell transplantation as a curative treatment for a range of hematologic diseases (such as certain types of acute leukemia or lymphomas). Samples were collected between 10 days prior until 30 days after their transplantation.

Intriguingly, compositional day-to-day variation of the fungal mycobiota was much higher than that of the bacterial microbiota. Some of this high variation can be explained by the transitory nature, in contrast to true colonization, of some fungal species in the human intestine. Prior studies revealed that detection of certain fungal DNA and fungal organisms, such as S. cerevisiae, is linked to dietary habits and oral hygiene. Some of the high variation can therefore be explained by the transitory nature of passenger fungal species (as opposed to true gut colonization).

The predominance of C. parapsilosis in our study may be due to specific supportive care practices at our cancer center. All patients undergoing stem cell transplantation receive antifungal prophylaxis with micafungin during the first weeks in the hospital before being switched to a mold-active azole antifungal drug. C. parapsilosis has a higher tolerance against echinocandins (even if tested susceptible in the lab) than other Candida species. The choice of an echinocandin as prophylactic antifungal may therefore inadvertently select for C. parapsilosis in the intestinal niche. Other transplant centers that use different antifungal prophylaxis strategies may therefore find other species, such as C. albicans and C. glabrata, in similar patient groups with unknown consequnces for patient outcomes.

Beyond the potential impact of antifungal prophylaxis, intestinal bacterial dysbiosis may play a role in the increase in specific intestinal fungi . Expansion of C. parapsilosis complex in our patient cohort was mainly seen in patients that had a reduced intestinal bacterial biomass, as measured by 16S qPCR.

An interesting factor is a difference seen between the amplicon sequencing and culture results. While an expansion and domination of C. parapsilosis in the ITS1 sequences was closely linked to C. parapsilosis being cultured from fecal samples, C. albicans or S. cerevisiae (and other fungi) were only very rarely culturable, even if they dominated the ITS1 sequences. My hypothesis is that these fungal sequences do not stem from gut colonization, but from the oral cavity or the environment, and that viable C. albicans and S. cerevisiae is killed during the gastrointestinal passage and/or the antifungal prophylaxis. This is important to keep in mind, when analysing an interpreting amplicon data (or any pure DNA data) from intestinal samples.

C. parapsilosis complex domination in the gut was linked to significantly lower overall survival in our cohort of 156 patients. Lower survival in these patients was due to higher transplant-related mortality, independent of Candida bloodstream infections.

In summary, our results show that the mycobiota is characterized by unique features compared to the bacterial microbiota. Fungal expansion with viable C. parapsilosis species was linked to low bacterial biomass and associated with worse prognosis in this cohort of patients undergoing stem cell transplantation.

In the future, point-of-care analysis of stool samples targeting the micro- and mycobiota may enable to discern patients at increased risk of adverse outcomes (e.g. those with low bacterial biomass or those with Candida expansion) and enable targeted treatments to improve their prognosis.

The original article can be found here. 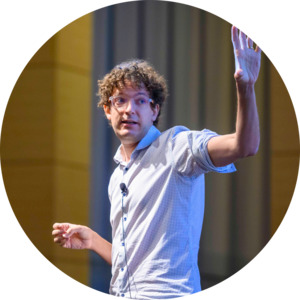 I am an Infectious Disease Doctor with a background in epidemiology and bioinformatics. I am passionate about clinically meaningful translational research that directly benefits patients.  My research interests are the human microbiota (especially the fungal mycobiota), vaccines and malaria.