Molting enables insects to grow and develop, but also temporally removes a very important layer of protection – the cuticle. Immature stages of Lagria beetles are defended during this vulnerable phase by cuticle-associated symbionts which are housed in three dorsal pockets and produce antibiotics.
Rebekka Susanne Janke and Laura V. Flórez
2 contributors
Like Liked by Salvatore Mandalà and 2 others
0

In the early 20th century, Hans Jürgen Stammer made a peculiar finding during his histological studies of beetles belonging to the genus Lagria. In the course of describing the morphological variety of accessory glands presumably containing bacteria in female adults of several darkling beetles, he also looked deeper into the body plan of Lagria hirta larvae. He found that these larvae had three pouches on their back, filled with a specific kind of rod-shaped bacteria. As a student of Paul Buchner, perhaps the most influential pioneer of symbiosis research in insects, he knew that these larval structures were very unusual for carrying bacteria.

Almost a century later, Laura Flórez and Martin Kaltenpoth picked up the topic of the bacteria associated with Lagria villosa beetles and elucidated their importance for the beetle: the bacterial symbionts present in female adult beetles belong to the genus Burkholderia and are pressed out during egg laying to defend the egg stage against fungi that are present in the soil. By producing antimicrobial compounds, they prevent fungal growth on the eggs. One novel compound stood out for its abundance and ability to protect eggs of Lagria beetles; it was named lagriamide.

However, until then the function and relevance of the symbiotic pockets in larvae remained unclear, and since Stammer’s times, no one had found similar organs in any other insect larva. Their presence in both sexes in larvae was a first hint suggesting that they likely play a specific role beyond transmitting these onto the next generation. If both female and male larvae bear the costs of carrying symbionts along their juvenile stage, they most likely get something out of it.

And that’s how my PhD project saw the light of the day and we started to elucidate the mystery of the dorsal symbiont structures of Lagria larvae. We found a good clue on the symbiont’s role after the egg stage while inspecting the exuviae of first instar larvae, that is, the skin that these little hairy creatures shed off on their very first molt. There, we saw symbionts sitting between the bristles on the outside of the shed skins. What where they doing there and how did they get there?

After learning how to fixate and section Lagria larvae from our expert on histological sectioning, Benjamin Weiss, I discovered that the symbiotic larval pockets are not only developed as invaginations of the cuticle, but they remain open and connected to the outer surface. In addition, the pockets are not shed off the larvae during molting but remain throughout larval development. This makes it easy to keep the symbionts during molting, but also to release some of these bacteria or the compounds they produce, which might be useful for something…

To understand this all better, we needed more samples fresh out of the field, since the symbiont composition is altered already after one beetle generation in the lab. These were the perks of studying Lagria beetles: Once a year, escaping the German winter and going to field trips to collect fresh specimens in the blistering heat of Brazilian soy bean plantations. With Andre Rodrigues, we luckily always had a helping local hand for our collecting trips.

We collected many samples from all the different life stages freshly from the field and Laura Flórez analysed their symbiont community via 16S amplicon sequencing, while I sectioned them for fluorescence in situ hybridisations (FISH), Sarah P. Niehs and Kirstin Scherlach did the chemical analytics, and Filip Kaftan carried out MALDI imaging to localize the antimicrobial compounds in situ. We found that the symbiont strain Lv‑StB, which is largely responsible for the defense on the egg stage, is also predominant in the remaining life stages, and that the antifungal compound lagriamide is present among all of those and nicely co-localizes with its producer Lv‑StB.

Having symbionts with antimicrobial properties being released on the surface of larvae could only mean one thing: The larvae are also defended by the chemical produced by their symbionts and we needed to prove it in vivo.

Luckily, I got the chance to hop on my last flight to Brazil just before the pandemic started, and collected as many beetles and memories as possible for the next year. With that, I carried out several bioassays, where I exposed larvae with and without symbionts to different kinds of fungi. While I monitored death and survival of the little larvae for a couple of weeks within several lockdowns, I had gotten to know my lab pets almost better than some of my lab mates. But the experiments paid off, and the analysis showed indeed that larvae which carry their symbionts survive significantly better and have less fungal infections in the presence of pathogenic fungi than larvae without their bacterial guardians.

Although in general, molting can remove harmful intruders and beneficial partners from the insect’s cuticle, it can leave the insect stripped from its protective cuticular coat and more vulnerable to infections for some time. By maintaining protective guardians in pockets on their back, which persist during repeated molting events, Lagria beetles found a way to prevent detrimental fungal infections and boost the survival of their progeny. 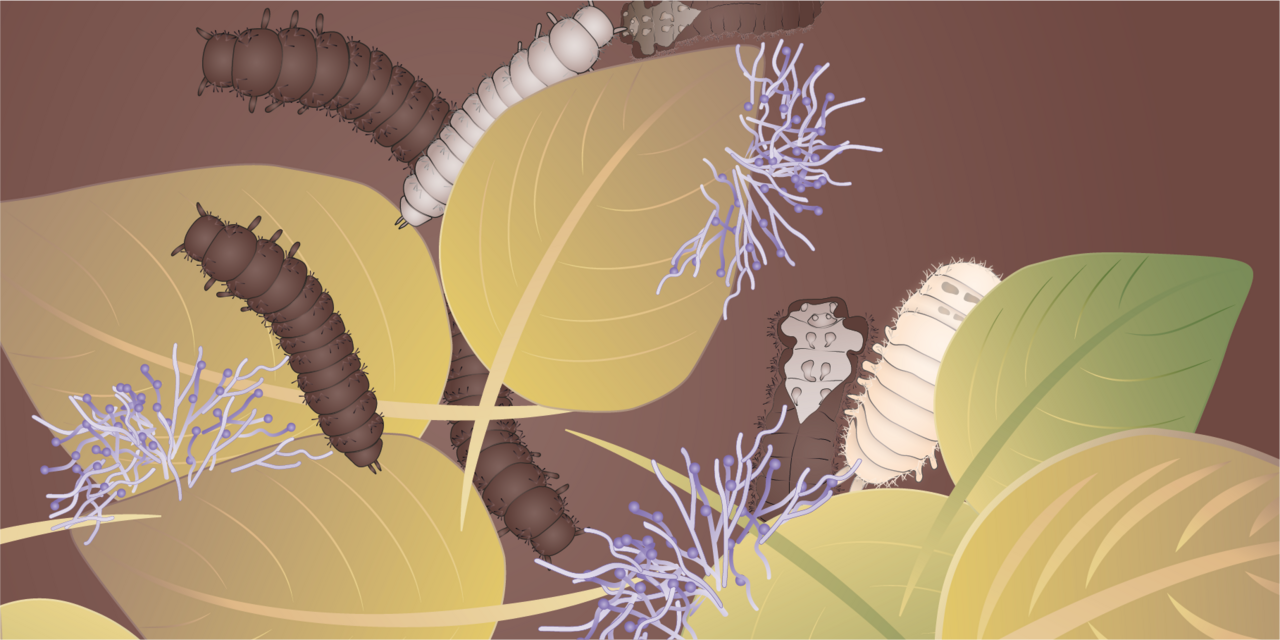 Molting enables insects to grow and develop, but also temporally removes a very important layer of protection – the cuticle. Immature stages of Lagria beetles are defended during this vulnerable phase by cuticle-associated symbionts which are housed in three dorsal pockets and produce antibiotics.